For the past few weeks, the Tough Pigs homepage has featured this nifty graphic promoting our Jim Henson Hour reviews (designed by our own Joe Hennes). It always makes me chuckle because it looks like we’re celebrating 25 wildly successful years of a smash hit series. As much as I wish that were true, it isn’t. After just twelve mostly enjoyable episodes, we’ve reached the end of the line.

Twelve episodes isn’t a lot, but in a way (an extremely depressing way, but it still counts) the show ran a whole lot longer than just three months. This episode contains the final-ever installments of both MuppeTelevision and The (original flavor) Storyteller, but neither of them aired in 1989 like they were supposed to. The whole episode aired in the UK in 1990 – and the Storyteller segment finally aired in the US on HBO in 1997 – but the MuppeTelevision segment has never been broadcast domestically.

So, technically, some enterprising or desperate cable network could run MuppeTelevision tomorrow and promote this as an all-new, Never Before Aired episode. And then we’d get our 25-year run after all! Wouldn’t that be exciting?! 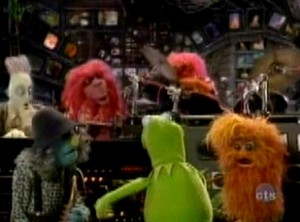 Not really, because this isn’t the show’s strongest episode.

The most notable thing about this episode, entitled “Food,” is what it’s missing. We’ve talked before about how the show tried all kinds of different genres and approaches, but “Food” is the most radical departure we’ve seen in a MuppeTelevison segment so far – unlike all 120 episodes of The Muppet Show, it doesn’t have a guest star.

Now, it’s possible that this was a conscious decision. After all, this was only the eighth MuppeTelevision episode. It seems unthinkable that Jim Henson couldn’t get eight guest stars lined up for his new prime-time TV show. Plus, MuppeTelevision guest stars were awkwardly integrated from the start, and other episodes had toyed around with the format – most notably Power, which used two sets of guest stars and didn’t try to have either of them interact with the characters in Muppet Central.

So it’s easy to imagine that Henson and his team decided to see how the show would play without a semi-recognizable face shoved into a monitor in the corner. But it doesn’t play like a bold new experiment. Instead it just lends the episode an oddly hollow feel, the lack of guest star serving as a notice that the show is just about to expire. This is the show’s dying breath, and as a viewer you can feel it.

It takes a few minutes for that feeling to set in, though, because the beginning is terrific. The show opens with a hybrid Solid Foam/Electric Mayhem band (consisting of Beard, Clifford, Digit, Animal, and Zoot) playing loudly in the control room. When Kermit protests “Don’t you know you’re driving me crazy?,” they switch to a song with that title. It’s a wonderful, perfectly Muppety moment, and it makes me laugh out loud every time I watch it.

The good feelings continue, because then the band plays “The Food Chain Song.” We watch a series of animals (from a bee all the way up to Doglion) sing about the food chain as they eat each other. I’m a bit sad that the Muppet Wiki doesn’t list a songwriter credit for this number, because it’s really catchy, the execution is top-notch, and we get to hear Kevin Clash as a Doglion who sounds like Hoots. It’s great. Through the first five minutes, this is shaping up to be a series highlight.

Then it hits a wall. Hard. Starting when Waldo shows up and starts talking about ratings again.

In theory, I like Waldo a lot. His very existence as a real-time-manipulated CGI character in 1989 is one of those Amazing Things Jim Henson Did. But that turned out to be the most interesting thing about him. He never quite came together as a character. His actual function in the show was to worry about demographics, which is not a fun thing for him to do. In this episode, he suggests a Sheriff Hamlet sketch to reach the Danish Cowboy crowd.

They cut back to him riffing on that three times. It never improves. 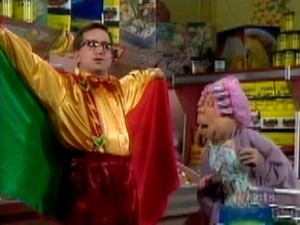 That repetition is emblematic of this episode’s whole middle section. It isn’t comedy repetition. It isn’t Jim’s famous line about how a joke not good enough to use once might be bad enough to use three times. These jokes just aren’t good enough, full stop. It’s a bunch of bad ideas being stretched out because they have to reach a half-hour somehow.

The first offender is a sketch about a person named Sheldon the All-Knowledgeable Grocery Store Stockboy. He’s played by a random human, and the joke is that he doesn’t know how to help customers or where food comes from or anything about his job. This might have worked with a guest star (This guy is vaguely in the mold of Rick Moranis or Robert Carradine, so let’s imagine one of them), but as it is it starts out awkward and quickly becomes wearying.

We also get two sketches where Jacques Roach teams up with Muppet Show characters performed by Jim Henson – first Link Hogthrob and then the Swedish Chef. The Chef sketch has its moments (particularly the line “tofu pasta der trendy wendy wü”), but they already met once. Jacques Roach just isn’t enough of a character for that to be interesting twice. 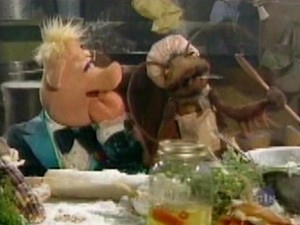 The other – a restaurant review show called “Luncheon with Link” – is dire. It starts by lifting the “rats in a restaurant?!” gag from The Muppets Take Manhattan, and then moves on to Jacques Roach showing Link six or eight examples of unclean things in the kitchen. At the risk of repeating myself, they aren’t very memorable examples.

The show reaches its nadir with a fake commercial for an album of spoof food songs. That’s not a bad idea, necessarily, but what we get here plays like a first draft. Some, like “Fry Me a Liver” and “I Love a Puree,” are simply not great puns. Others, like “Don’t Cry for Me, I’m a Weiner” don’t even sound like they’re about food. Worst of all, the sketch rehashes “Hey Food,” which was a whole lot better as a Sesame Street song.

Am I overthinking that sketch? Of course. But I certainly didn’t laugh at it, so naturally my mind started to wander.

So after all of that, I mostly just sat there like a grump through a couple of mediocre sketches about boring things that don’t interest me. But then came the closing number – the hybrid Foam/Mayhem band with a song called “You and Me” – and I remember why I love this show. It starts with a beautiful shot of Beard walking through the control room. This is by far the prettiest shot of the control room we ever saw.

Even better, the band plays in the control room while various characters sing on monitors. This is the most perfect expression of the show’s central conceit. We’ve seen characters from various channels sing together in the closing number before, but here they’re accompanied by the band in Muppet Central. The Muppets are the actual center of the show’s universe, and it’s perfect. I’m so sad to see MuppeTelevision die so young. 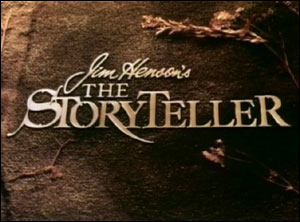 As if to make up for the lack of a guest star in “Food,” “The Three Ravens” has three recognizable actors in its three leading roles.

Well, okay, the actual lead wasn’t so recognizable when it was made. Joely Richardson (who plays a princess cursed to silence so she can turn her brothers from ravens back into humans) was already a member of the famous Redgrave family, but she was mostly unknown. By the time in aired stateside in 1997, though, she was the co-star of 101 Dalmatians and King Ralph, so most people probably thought she looked familiar.

On the other hand, Jonathan Pryce (her father the king) had already starred in Terry Gilliam’s Brazil, still one of his best-known roles. Likewise, future Muppets Most Wanted cameo guest star Miranda Richardson (the witch responsible/the king’s new wife) was famous for playing TV’s funniest Queen Elizabeth I on Blackadder. They weren’t exactly superstars, but they were solidly established actors.

I focus on those performers not just because I know them from other things, but because they all turn in excellent work here. Joely Richardson hardly speaks (even before the curse), but she nails her character’s gentle nature. Every emotion – from ecstasy over meeting her future husband to anguish over the loss of her son – is right there on Richardson’s face. 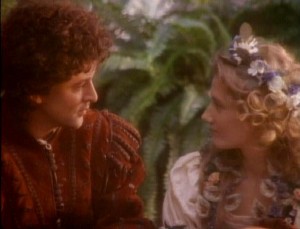 Miranda Richardson (no relation) goes to the opposite extreme. She gobbles scenery like crazy. Her smile is menacing, her assurances to her husband are terrifying, and her facial expressions all come with a splash of crazy. It’s just delightful. Pryce, meanwhile, captures his character’s conflicted nature far better than he needed to. When his character dies off-screen halfway through, it only has an impact because of Pryce’s affecting performance.

This would be a fine show with worse performances – many Storyteller episodes are – because they’re also working from one of Anthony Minghella’s best scripts. Just one example: the witch is introduced at the Queen’s funeral with the lines “There was one among the mourners whose heart was ice, whose soul was cold, whose smile was sly. Whose brain raced ahead to the day when the king would want to ease his loneliness.”

When John Hurt says it, it sounds INCREDIBLE. 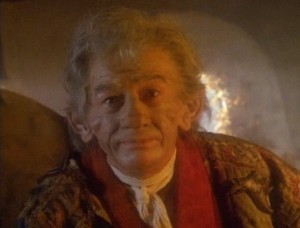 Speaking of John Hurt being good at his job, the episode ends with my single favorite moment in the history of The Storyteller – one of the princess’s brothers has to live with a raven’s wing forever because she spoke three minutes too soon to break the curse. The Storyteller chuckles and says to his dog, ““But he didn’t mind, and nor do I, and nor my dear should you.”

Like the ending to MuppeTelevision, it’s a perfect note to end on. The Jim Henson Hour had plenty of flaws, but when it worked, it was spectacular.

In this episode’s closing tag, Jim tells us that “Next week, there will be more fun, more music, and more stories.” That promise went unfulfilled for viewers of the show, but not for Tough Pigs readers. This series of reviews isn’t over yet. We’re going back to take a look at the show’s early development, beginning with a look at “Inner Tube,” the 1987 pilot. So join us next time for that!

Click here to know you’re driving me crazy on the Tough Pigs Forum.