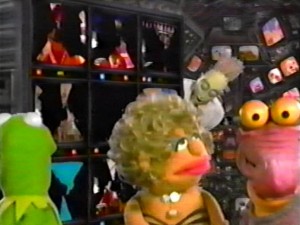 Here we are, back for another week of who-knows-what on The Jim Henson Hour.  This episode begins in Muppet Central with a gag where a singer lets loose with a high note that shatters all the monitors in the control room.  In my review of the “Outer Space” episode, I talked about the limiting aspects of the all-bluescreen set, but here’s an example of the writers finding ways to take advantage of it — you can smash a roomful of TVs, and it doesn’t affect the budget.

(True fact: I watched this show on TV when it first aired, back when I was still using a Baby Kermit toothbrush.  At the time, I thought all the monitors in the Muppet Central set were real, and I wondered how much they cost and how long it took to hook them all up.  I was freakin’ adorable.  Or stupid.  One of those.)

Tonight’s guest stars are the a capella group the Nylons, and again I have to say: Really?  I mean, I dig the cover of “The Lion Sleeps Tonight” they do in this episode and I’m sure they have a lot of fans who love them very much, but I’ve honestly never seen or heard anything about them outside of this show. I would say this confirms my suspicions that Jim wanted to take the focus away from the guest stars, except that last week’s episode had the star of one of the most popular shows then on TV.  So I have no idea what’s going on.

Here’s a question: What would happen to the Muppets if Kermit wasn’t running the show and the rest of the gang was left to their own devices?  We’ve all seen this addressed in Muppets Most Wanted recently, but in fact it came up 25 years earlier on The Jim Henson Hour. Jeez, those Muppets.  Always recycling ideas! 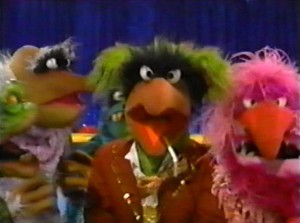 As all members of the dismally small viewing audience for the previous two episodes know, Kermit’s job on MuppeTelevision is to choose the programming that goes on the air.  This week, there’s a running gag where a bunch of monsters are hosting a telethon.  If we don’t give them more money, they say, “we’ll come around and stick a piano up your nose!”, a promise which I believe had previously been made by Jerry Lewis on one of his Labor Day MDA Telethons.  Gonzo and Leon don’t understand why Kermit’s letting that kind of nonsense on the air instead of the sophisticated acts they’ve proposed, like chickens on roller skates.

It all ends up with the gang convincing Kermit he should take a break and let them run the show, and for some reason, he agrees.  He finds a monitor with a nice, peaceful beach scene and goes there for some R&R.  That’s nice for Kermit, but I have to wonder what kind of ratings that TV channel gets if they show nothing but the same shot of a beach all day.

While Kermit is away, the Muppets spend most of the time arguing about who should be in charge and what should happen next.  There’s a noticeable lack of real chaos or cringe-worthiness — nothing on the level of Gonzo’s indoor running of the bulls or Scooter singing “Moves Like Jagger” — but in between control room scenes we do get a few good thematically-related sketches, including one that’s a highlight of the series.

It’s a fable about a kingdom that had no king, except they did have a king, but nobody cared about having a king, so he retired and became a hat-sharpener.  One day, a stranger (played by Chris Langham, who I’d bet money was the primary writer of the sketch) locates the former king and convinces him to resume his kinging duties, which he does, declaring vacations for animals, more melted cheese on things, and that forthwith, all left feet shall be referred to as Eric.  And so, a narrator tells us, “the people of the kingdom decided they liked being told what to do, and the king moved back into the long-empty palace, and people began to work as slaves and serfs and peasants, and everyone lived happily ever after.  Until one day they blew it all up.” 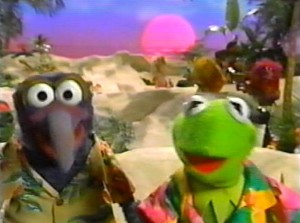 So that’s pretty great stuff.  Back in the control room, everyone eventually decides they miss Kermit, so they all go to that beach scene, and they perform the terrifically catchy closing number “Sweet Vacation,” which was written by none other than Fraggle Rock‘s Balsam and Lee.  And that’s great stuff too!

In Muppets Most Wanted, the Muppets learn the valuable lesson that without an authority figure making decisions, their show becomes kind of terrible.  In this episode of The Jim Henson Hour, a mostly different cast of Muppets learn a different lesson: Without a single decision-maker in charge, it’s hard to get anything done at all.

Oh, by the way, Fozzie’s in this episode!  In interviews, Frank Oz has said that he had no interest in working on a weekly series after The Muppet Show, but he shows up a handful of times on The Jim Henson Hour to let us see our old friends Fozzie and Piggy. Here, Fozzie abandons his career as comedian to become a TV weatherman.  It lasts about four minutes, but it allows for some amusing guest appearances by Willard Scott and Jane Pauley from The Today Show.  In the end, Fozzie decides to stick with comedy,which is what he’s… good at?

I’ve seen this episode a dozen times, but here’s something I just thought of.  Was Fozzie’s decision to walk away from his gig with the Muppets for a higher-profile job a subtle nod/jab from the writers at Frank’s own choice to pursue his film directing career? Swap out Fozzie’s weatherman toupee for Steve Martin and you could certainly make the case.  And yet, just as Fozzie ultimately returns to joke-telling, Frank would keep coming back to the Muppets for years to come. 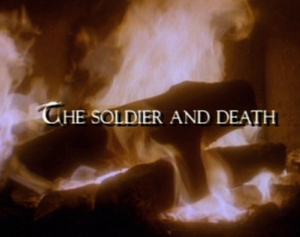 The Soldier and Death

The devils are so cool.

Not all devils.  I have no fondness for the traditional evil agents of Satan, and I have no opinions one way or the other about the New Jersey Devils.  But the gaggle of devils built by the Creature Shop for this episode of The Storyteller are pretty cool.  I may change my mind the next time I watch the whole series, but for my money, The Soldier and Death is the best episode of The Storyteller, and the devils have a lot to do with that.

In the story, the soldier of the title challenges them to a game of cards for their forty barrels of gold, and they lose despite all their best attempts to cheat.  The devils must have been ridiculously expensive to build.  There are at least ten of them, and I assume most of them required multiple puppeteers to operate.  They have to be among the most expressive animatronic characters ever built at that time, with the ability to display a wider range of emotions than some of the highest-paid human actors on television then or now.

And they have personality!  A lot of the Storyteller episodes have cool creatures, but if you asked me to name the primary characteristic of, say, the Heartless Giant or the trolls from The True Bride, I would just say “ugly” or “unpleasant.” The devils don’t have much screen time, but they make the most of it. They’re wicked, they’re sinister, they’re conniving, and they’re fun to watch.  And Jim Henson spent however many barrels of gold it cost to have them built for a few minutes of one episode of a limited-run TV series. 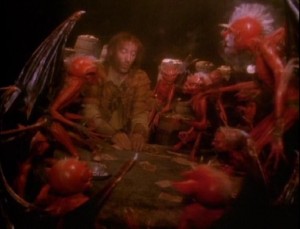 As for the rest of the story, it’s typically dark and magic-filled for this series.  As a reward for basically just being nice to people, the soldier gets a magic sack that he can use to capture anything.  This is great for the soldier, not only because it allows him to be eco-friendly by reusing a sack instead of a getting new plastic bag every time he goes to the grocery store, but also because he manages to use the sack to catch Death itself.

With Death stuck in a bag, no one on Earth can die, which seems like a pretty good deal at first.  But soon it becomes apparent that Death is pretty important, as soldiers in war keep getting shot but getting right back up again, and doomed lovers who throw themselves off cliffs have a long climb back.  You know what else would be awful?  Assuming there’s just one Death for all living creatures, the mosquito population would be out of control.

The soldier lets Death out of the bag, which restores the natural order of things, but now Death is afraid of the soldier, so he can never die.  He tries booking a room in Hell, but the devil doorman sees his sack and forbids him from entering.  (Why didn’t he just get rid of the sack? Fairy tale logic, I suppose.)  The good folks in Heaven won’t let him in, either, so as the story concludes, the soldier is wandering around the world forever.  It’s not exactly a happily ever after.

You know, a lot has been said about how Jim Henson had so many projects he wanted to work on, but he felt like there was never enough time for everything.  It’s interesting that this is one of the Storyteller episodes that he directed, as the main character ends up with all the time in the world on his hands… but in the soldier’s case, it turns out not to be such a great thing.

Come back soon for “suspense, violence, and more violence!” as Anthony reviews the Dog City episode!

Click here to stick a piano up your nose on the Tough Pigs forum!

My Weeks with The Jim Henson Hour, Part 10: Secrets of the Muppets