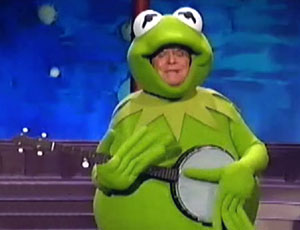 What I’ve really enjoyed about The Muppets is that it’s actually allowed for character growth, and it’s not just a collection of sketches with a basic premise to center around. Hard as it may be to believe, I can see the roots of that in the latter episodes of Muppets Tonight. While sketches are still very prominent, storylines are stronger and the guest stars are better incorporated. One of the best examples of this is the first episode I’m going to talk about, featuring an unlikely pair of guest stars in Coolio and Don Rickles.

And while I’m talking about the roots of other Muppet projects, the episode starts with a news report saying that powerful businessman Ernst Stavros Grouper, as part of a bigger transaction, has bought KMUP, and as a result, now owns Muppets Tonight. Grouper, a vaguely Russian-sounding Muppet, wants to make changes the show, and he starts with getting rid of Kermit the Frog. Sound familiar? (Sadly, unlike another certain Russian-sounding Muppet villain, Grouper doesn’t get his own musical number.) 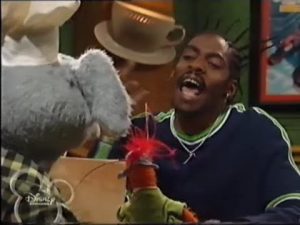 What I particularly like about this episode is that most of the bits actually serve the over-arching plot. The first parody sketch we see is a trailer for Jean-Dodd van Clamme in “Enter the Chowder: Manhattan Style,” a movie Grouper is producing. He shows the clip to Kermit to explain what kind of popular entertainment he’s trying to make thanks to the use of focus groups and market research. Later, Rickles appears as Grouper’s company morale officer, trying to restore relations after Kermit quits over Grouper’s insistence that he change his name to Virgil the Monkey.

Meanwhile, Coolio is trying to show Seymour and Pepe how to be good rappers, which pays off in the episode’s closing number. The non-plot-related sketches mostly involve the guest star (in this case, Coolio), something I found lacking in many first season episodes. And these sketches are fun, even if they don’t always make sense. I’m mostly referring to the debut of “The Real World: Muppets,” where Clifford isn’t able to get a moment to himself, so he takes revenge by feeding his roommates radioactive soup. Well, you know the old Jim Henson adage: if you can’t find an ending to a sketch, have something blow up, get eaten, or be fed radioactive materials. (Or was that a Jerry Juhl adage…) 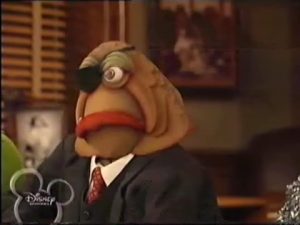 To no one’s surprise, the Muppets band together and walk off the show, leading Grouper to have to run the show himself, poorly. The gang decides to return on one condition: everyone gets to come back, including Kermit. Grouper learns a valuable lesson on trusting your instincts and not relying on marketing experts, Coolio and the Muppets get to sing a fun closing number with some really good puppetry and camera work, kids get something to think about, and Muppet fans get a solid episode to enjoy. 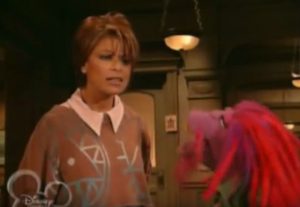 Well, I’ve taken my first dip into the second production season of Muppets Tonight, and so far, it looks like an improvement. The writers are starting to find a groove. Storylines are becoming stronger, while the sketches that were repetitive and well…dumb have started to fade away, while the stronger sketches survive.

But in the words of our next episode’s guest star, the show takes two steps forward…and then two steps back.

Now, to be fair, this isn’t necessarily a show of decline. Paula Abdul’s episode was actually the third episode to ever be produced for the show. Unfortunately, a lot of the hiccups that came in the earlier episodes also return. The plot for this episode is far looser, and mostly surrounds Clifford’s attempt to get a kiss from guest star Abdul. (Man, sexual harassment in the office sure was wackier in the ‘90s!) The show is filled with random sketches, some hits and some misses. I’ll start with the misses, because what works really works well in this episode. 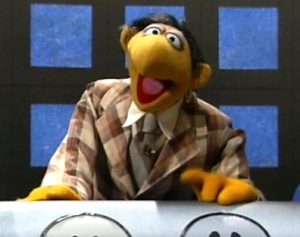 The game show UK spot “Swift Wits” returns for its final appearance, and this time, host Snookie Blyer (who either sounds like a Muppet or the main character of Amazon Prime’s newest series) is so desperate to avoid Big Mean Carl devouring another defenseless animal that he flat-out gives the answer, which the contestant has to say to win. In true comic fashion, the contestant says everything but the answer, and Carl has his feast.

What made the sketches on The Muppet Show work was that while you could have a recurring sketch with a standard setup, they were generally unpredictable in their punchlines. The Swedish Chef could be swallowed by living dough or be held hostage by lobster banditos. It’s a similar premise (a cooking show goes awry) with different conclusions. The reason I don’t think “Swift Wits” worked was that it was always a similar premise with similar conclusions. You know Carl’s going to eat something as a result of the contestant’s failure.

Elsewhere, Sherlock Holmes (as portrayed by a whale) crushes his landlady in “The Case of the Red Herring.” It’s a one-joke sketch, but it’s short, so it doesn’t horribly overstay its welcome. Clueless Morgan and Polly Lobster finally get to finish singing their song this week (and given that their usual interruption doesn’t work, it makes for a nice sense of resolution) for another UK spot that would sadly be their final on-camera appearance in Muppet history. Personally, I thought these were fun characters that deserved a life beyond Muppet Treasure Island, and even beyond Muppets Tonight, but sadly, that never came to pass. (Still, they got a much better treatment than Mad Monty.) 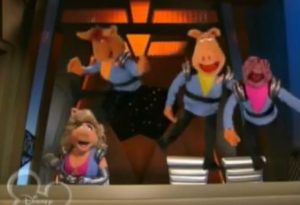 Meanwhile, on “Pigs in Space: Deep Dish Nine,” the gravity gets turned off and the crew floats around, with the exception of the apparently too heavy and very perturbed Miss Piggy.  They ignore the fact that the Swinetrek-A is clearly caught in a fat-joke time loop, or at least the writers are. The Elvises proceed to Elvis their way through the “assassination” of Julius Caesar, ending with them all heading to Caesar’s Palace. (I doubt there’s gambling at this Palace, though I wouldn’t bet against a buffet.) And the show closes with an unnecessary performance by the Nine Inch Snails, which seems more like filler after the true closing number, but I’ll get to that in a moment.

Probably the best parts of this episode are some of the awesome puppetry techniques and special effects that are used. The show kicks off with Gonzo performing with the Refined Young Cannonballs, who are launched into the studio, striking practically every Muppet. We see how this was done over the closing credits, and I give the performers credit for their patience in waiting for a perfect hit. I can only imagine how many takes must have been done just for this one bit. 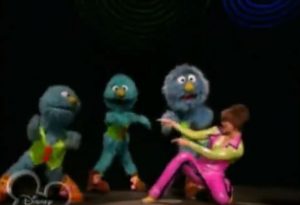 Later, some of the best puppetry work I’ve ever seen comes in Abdul’s performance of “Opposites Attract.” The bunraku-style work of the Clodhoppers and a full-bodied Clifford look positively seamless. The Bossmen are as good as they’ve ever been. Everything from full-bodied Muppets like Doglion and Sweetums to hand puppets like the Extremes are used in this number, and it looks fantastic, like a classic Muppet Show approach with a more contemporary style.

The show launches towards its conclusion when Dr. Bunsen Honeydew and Beaker, in response to an editorial Sam the Eagle gives earlier in the episode claiming that the youth of today have no heroes to look up to, make a robotic replica of Abraham Lincoln, which proceeds to go insane and run amok through the studio, ultimately crashing a performance by the super-cute Whipley Triplets. (Wow, so the Pigs in Space sketch wasn’t the only thing stolen from Alan Arkin’s episode of The Muppet Show.) To calm the robot down, Abdul and the rest of the Muppets sing a surprisingly heartfelt rendition of “Lean On Me,” which stops Lincoln’s rampage, showing that through her compassion, Abdul was the true hero all along, and Sam praises her as the number closes. (I guess every celebrity can’t be a weirdo!) 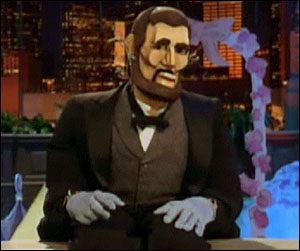 Overall, I’ll chalk up the episode’s shortcomings to the writers and staff still trying to find their way at that point since it was one of the first episodes produced. The Coolio and Don Rickles episode is an improvement, as the storyline is stronger and the recurring sketches that didn’t work had died off by that point. Unfortunately, the second season, which was commissioned by ABC, was thrown to the Disney Channel, where it was usually packaged with a rerun of a previous episode, which may have hurt ratings. It’s sad to see a show actually starting to hit its stride relegated to the reject pile, with no hope for renewal. Hopefully, ABC wouldn’t do that a second time…would they?