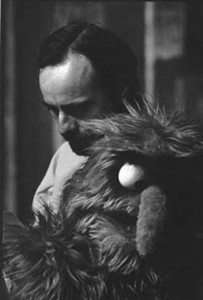 The remainder of our interview will continue in a “Lightning Round” style, where we’ll shout out Jerry’s best-known characters and productions, because asking real questions is so passe. Now let’s get this part-three-party started!

ToughPigs: Do you have any favorite moments from Sesame Street?

Jerry Nelson: One that stands out in my mind, and I’m not sure who wrote it, was with Herry Monster. I think it was “I Can’t Help It“, where he demolishes the whole Fix-It Shop. I love that one. Jon Stone shot it, and he did a great job. 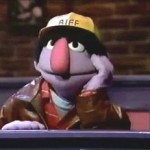 JN: To me, it was always Burns and Schreiber. Sully wasn’t so much Schreiber, but Biff was the Jack Burns character. 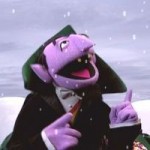 JN: Probably of all the Sesame Street characters, the Count is my favorite to do because of all they’ve written for him. He’s a lot of fun, and probably the most consistently written-for character. Although I love Sherlock Hemlock an awful lot. He’s always been a favorite. And I love Herbert Birdsfoot too, he was very pedantic and teacherly in his way, and he was the straight man for Jim and Frank’s characters. But that’s okay, that was my delegation in the early days. Announcer and straight man. 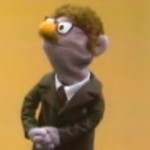 TP: Why do you think Herbert Birdsfoot didn’t stick around?

JN: I don’t know, maybe he was too pedantic (laughs). 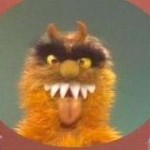 TP: Where did Frazzle come from?

JN: I’m not even sure. I think they just wanted a monster who made unintelligible noises, and that’s what I came up with. 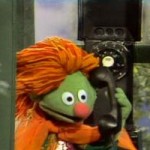 JN: Little Jerry was Jeff Moss’ thing. I think deep in his heart he wrote that because he loves to sing bass. They were wonderful pieces. They were so much fun to do. 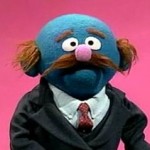 JN: I think Grover just needed a foil, just a guy that was impatient and never got what he wanted. It obviously was a good one.

TP: Why do you think he kept going back to Charlie’s restaurant if the service was so bad? 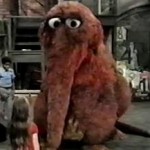 JN: That was fun, it was interesting. I was not loath to give that character up. But the reasons for giving it up were because at that time we were doing The Muppet Show and he was a real part of the show, and they needed his presence. So they asked if I’d mind giving it up. So for a while other people did it and I continued to do the voice, but eventually they let somebody else do it. 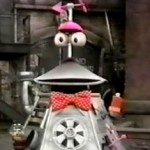 JN: I love Sam the Robot. I always thought they missed out on a good thing with Sam, and I thought a better way to do Sam was to let the little screen he had help segue into animation. I brought that up, but nobody seemed to think it was a good idea. I always thought that would’ve been a good way to use him, other than just going haywire. But that was probably me wanting my character to not be totally bogus. 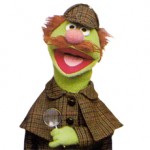 JN: I love Sherlock Hemlock. I think the most clever pieces were later when Kevin Clash did Watson the dog. Sherlock would come in and get it all wrong, but Watson knew what was happening and would be trying to get his attention. I thought it was a funny way to use the character. 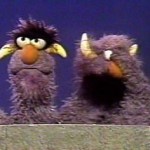 TP: Did that happen a lot where you’d accidentally create characters?

JN: I think it did. Because we’d do a take, and then we’d have to wait for them to reset the lights and the props, so we’d goof around. Play time. And I think that’s often the way that happens, the writers see us play and say “Oh, that’s funny”. 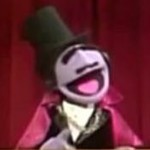 JN: I don’t know where the character came from. I think somebody just thought of a magician who always got it wrong. And they said, “He needs something to say,” so I said “A la peanut butter sandwiches.”

TP: So you came up with that?

JN: Yeah. Because what does every kid love but peanut butter sandwiches? And the character was funny, and he worked for quite a while. 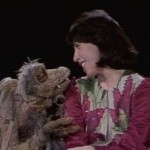 JN: Saturday Night Live was an interesting experience. It was a three-hat-trick for Bernie Brillstein, because he got to use all of his people in one production that became a smash hit. I think we did twelve or thirteen shows, and they were the first shows of Saturday Night Live. Different writers wrote the scripts. We never found a happy marriage. I think the best three shows were one that Chevy Chase wrote, and he never wrote another, one that Jim wrote, and one that I wrote with Lily Tomlin where we sing “I Got You Babe?”. Usually what would happen is that they would write a script and they would bring it to the Muppets. We would read the script, and then Jim and Frank would give notes. Then we would do it again on Friday, and we would go in, of course, on Saturday for tech and dress and the show. So we would tweak it until the last minute, that’s just the way the show worked. It was continually fluxing and flowing and ebbing and doing all the things to get it in the shape it would finally be in. Chevy’s script was very funny, where they were coming out of boxes, and Jim’s was similar to that one. The reason mine was different was because Jim and Frank were away, and I went every day to NBC through the week to work out some things, and Lily and I worked it out just like any other sketch. That’s also one of my favorite things I’ve ever done, that piece with Lily. At the time, I was studying Tai Chi, and I’d gone out to dinner with Richard and my daughter Christine, and we passed by a flower shop and I bought a rose. I kept it hidden when we went out on stage, so when I presented it to Lily, we had never rehearsed it, and you can tell by the look of surprise on her face. And it worked. It was one of my favorite things because of the performance. I worked with Lily on Sesame Street, and she’s such a joy to work with as a performer and a person. So that’s always been one of the heavenly performances to me. 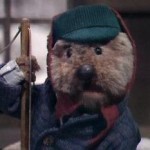 JN: That’s one of my favorites. With Paul Williams, which was a marriage made in heaven. I just got the sad news that Bill Beeton, who designed the set, just died. He was a wonderful designer and a gentleman. He contributed a lot to a few of the things we did over the years. Faz Fazakas built some beautiful remote control things that we’d never seen or worked with before. We had the whole river rowboat scene, it was a fantastic thing. Jerry and Sue Juhl brought the book to life in a wonderful way, staying very true to the original work. I thought it was just a beautiful thing. 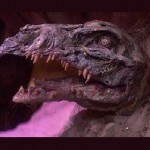 JN: I only did two voices in that, and some other little skittering noises too. But I didn’t work on any of the fantasy films, and I’m not quite sure why, but I think Jim knew that I wouldn’t have liked working on those films. Plus, they were mostly heavy costumes, they were hard puppets to work. They did that during the summer of 1980, so I spent the summer off in Cape Cod. Richard had a house up there, and I rented a house for the summer and fell in love with it, so I kept going back. And in 1996 I bought a house up there and I’ve been living there ever since. 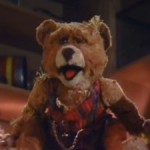 THE CHRISTMAS TOY/SECRET LIFE OF TOYS

JN: Christmas Toy was a wonderful story. And someone in Germany wanted to do a co-production for a 15-minute show. It was sweet, but it was rushed and it was difficult because a lot of the German crew didn’t speak English. There were generally two songs in every show and we would go in every day, and it was intense. I think we tried to do two shows a day. It was doable, but sometimes it was a little rough. We had to trust the directors because we didn’t have the luxury of going back and looking at everything like we normally would. He would say “We have what we need” or “Do it again.” 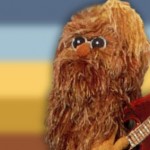 JN: There’s one that I’m surprised didn’t get better ratings. I don’t know why. Maybe it would have done better as two separate shows. But both elements to that show were wonderful. Some of the story stuff with trying to be a TV station was a little thin, but all in all there were lots of good pieces in there. The Storyteller things were real good, and the ones we did were real good too. I just watched “Dog City” again not too long ago, and it’s full of wonderful stuff. That show and Muppets Tonight, I’m surprised they haven’t shown up more. Though thanks to YouTube, you can see a lot of this stuff. I’m not sure how Jim Henson and Disney feel about it, but it’s a boon to everyone else.

JN: I was never really happy with my Tiny Tim. I feel like I could’ve done so much better than that. I loved Statler and Waldorf, Marley and Marley. And Christmas Present, working with Don [Austen], that was another costumed thing. I loved working with Brian [Henson] on films. There was a chance to play with things a little more. With Jim and Frank, you had to stay exactly where the script was, so this sense of play was not playful. But with Brian, that was always there, so I enjoyed working on that and Muppet Treasure Island. Although Mad Monty was another character I never felt highly comfortable with. I don’t know why. Some things I liked about him, but other things never came together as a character. And that was totally my fault. And I realize too that nobody else might’ve noticed that.

TP: I never noticed. I thought your Tiny Tim was great. And I also loved Blind Pew. I was disappointed that that was his one and only appearance.

JN: That was so much fun to play. And to work with Billy Connolly, he’s so funny. He just gives you everything you need to play. 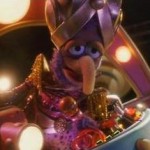 JN: I did the Ubergonzo. And that was kind of weird. We did that down in North Carolina. I liked Wilmington, the town. It was a whole different feel to that because Brian didn’t direct it. Somehow it felt weird, and I can’t really pinpoint it.

TP: When was the last time you actually performed with the Muppets, other than voice work for Sesame Street?

JN: Something in California, but I can’t remember what it was. It may have been the last movie.

TP: Do you miss performing?

JN: I miss seeing all my friends, but I couldn’t physically do the work now. I still love vocal performing and doing characters and the Count. I just did a takeoff on True Blood called “True Mud,” so I still get to create new things.

TP: Is there a message you want to pass along to the fans?

JN: Watch for my CD! I’m hoping to have it out before Christmas.

TP: Let us know when it’s available, we’ll promote the heck out of it for you! 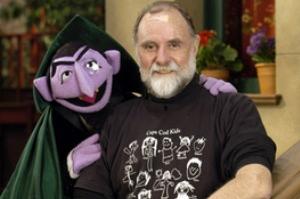 Many thanks to Jerry Nelson for agreeing to sit down with us for this interview. It has been an absolute honor.

Click here to stick your arm in the air on the ToughPigs forum!