The following article was written by Whitney Grace.  If you missed her previous installments of “The World of Muppet Crap,” click here to read about officially licensed Skeksis-inspired clothing, and click here for a look at a fan-made Muppet-themed undergarment.  Thanks for your dedication to weird Muppet stuff, Whitney!

Welcome to The Wonderful World of Muppet Crap!

There’s a common misconception about when explorers “discovered” Australia (the native inhabitants already knew it was there) and they saw a kangaroo. The explorers asked the aboriginal people what the name of the animal was. They assumed the aboriginals spoke English, because everyone does (duh!) and the response was, “Kangaroo?” Which translated to “What are you saying?

(Did somebody say yeth?)

It’s a fact, though, that Jim Henson and his crew liked kangaroos. They had a few here and there, but none as interesting as this little guy I came across in an eBay auction: 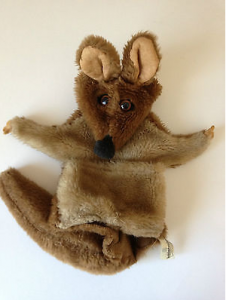 I’ve browsed through tons of auctions that try to pass their ratty, old children’s toy puppet as a “one-of-a-kind Muppet collectible.” Usually it’s not worth the polyester fiber it’s stuffed with, so when I saw a listing for a puppet at $160 my reaction was, “What?”  The kangaroo had a Muppet look, but I had never seen it in any of my Muppet marathons. Just where was this critter from?

Jim wasn’t a stranger to commercialism and consumerism. But he rarely, and I mean RARELY, made a Muppet-branded product for another company. He’d do commercials or advertise his own products, but never used his talents (or those of the Muppet Workshop) to make a Muppet for someone else.

The one instance we have on record is this little guy.

According to the auction, this was a promotional item for Continental Bank in Australia. When I first saw the auction, I believed it was a hoax. Then I saw this picture of the kangaroo’s tush: 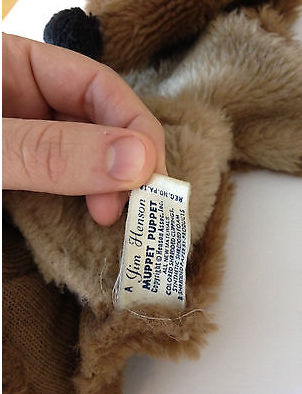 You can’t fake that type of aged fraying! Trust me, my menagerie of childhood stuffed friends proves my claim.

People go to extreme measures these days, so it was worth investigating to see if anyone else had encountered Mr. Continental Kangaroo.  Fortunately, Muppet Wiki came to my rescue again!  Not only was there a thorough blurb on the puppet, but also a few pictures from the 1970s. 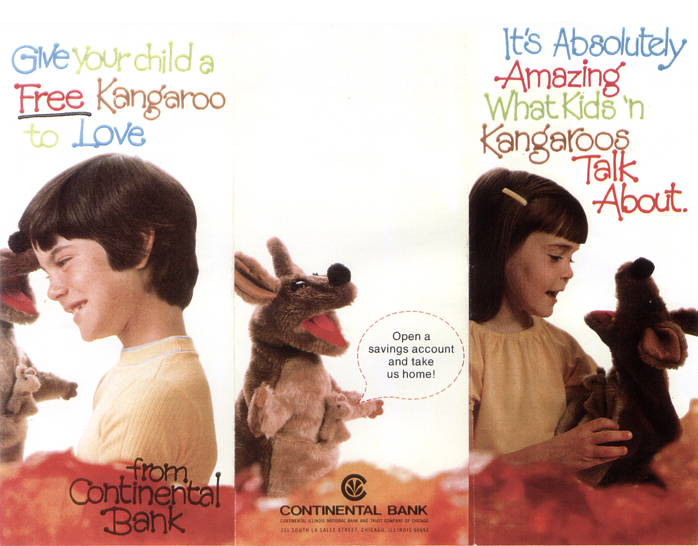 Looking at the images, we see a cute mother kangaroo with a little joey. As the pictures show, the children are engrossed in playtime. They appear to be a few moments from a toy tug-of-war. Then the kangaroo would be ripped in two and the joey would be orphaned.

These kids are also a testament to their time, because nowadays a kid would poke the kangaroo and ask, “What does it do?” No sounds or flashy gadgets, just the power of imagination. If I said that to one of my younger relatives, they’d toss the puppet in my face and shout, “What a rip-off!”  When was innocence lost?

The kangaroo was a promotional item for the bank and had a limited production run. If you deposited $300 or more Australian dollars in the bank you got the toy.  This does make the Continental Kangaroo a rare collectible, like the 1958 Wilkins and Wontkins puppets, except for one thing. Most Muppet fans have heard of the latter, but not the former. Some fans are willing to shell out several hundred dollars for the occasional appearance of Wilkins and Wontkins on eBay. I don’t see the same happening for Mr…. ahem… Mrs. Kangaroo.

(Unless she is a single mother, then it would still be “Ms.” The joey is not included, so maybe it is a mister? “Gender swapped Muppets, this season on Sesame Street!” I’d love to see how they would handle that topic, but the Anything Muppets would make that an easy thing to accomplish. Then again, the Anything Muppets are already gender swapped.)

Back to the original topic.  I don’t see this happening for the whatever Continental Kangaroo at $160. I’ve seen the auction on eBay for over a year now (and its price was originally higher), so no one is rushing up that giant rock in Australia to buy it. Just because an item is rare doesn’t mean it’s worth a lot.

Reading about kangaroos reminds me of the song “Tie Me Kangaroo Down, Sport.” The Muppets have done their own version, so everyone sing it with me:

Click here to deposit $300 or more on the Tough Pigs forum!