Today’s article was written by Whitney Grace.  Thanks for your dedication to weird Muppet stuff, Whitney!

‘Tis the start of a blessed New Year, where all Muppet fans alike can start afresh and work on their New Year’s resolutions. Instead of the usual getting into shape or writing a novel, I have decided that Muppet fans need to take on the tried and true mission of cleaning out their closets. The goal is to get rid of some of that really weird and shameful Muppet merchandise that has been burning a hole in your closet since the Swedish Chef blew the first hole in Muppet Vision 3D.

What is the point of cleaning out the closet? You get a feeling of accomplishment, a sense of less clutter in your life, and lots of more room for BIGGER AND BETTER Muppet stuff. As Kermit would say, “Yeeaahh!”

Since Jim Henson was swayed to license his characters for mass merchandising, there has been a plethora of Muppet goodies. Some fit the requirements of A+ standards like the Muppet Master Replicas dolls, but a lot of it also crap best exemplified by Tough Pigs’ annual Ugly Muppet Toys Pageant. This is where I come in. Hi ho! My name is Whitney Grace and I am a Muppet crap addict, meaning I spend a little bit of my precious time each week scouring the Internet for Muppet stuff. I am on the hunt for rare, quality merchandise that I can add to my museum instead of paying my mortgage.

During the recent holiday mania, I cornered the Tough Pigs boys, hog tied them (using a method taught to me personally by Miss Piggy), sat back in one of their recliners with a mug of eggnog, and basked in the light of their bedecked Muppet ornament Christmas tree. I explained to Joe and Ryan about my idea to write a column about Muppet crap I find on the Internet, and through some hefty threatening, I mean persuasion, I got my way. After I left, I forgot to release them. Whoops! Hopefully, they have gnawed through the industrial grade iron cables by now and will not hold me responsible for their dental bills. Send an invoice to Disney instead — Bob Iger can spare a few thousand to buy each of you some high-grade dentures, or I can find some on eBay (partially used of course).

Ladies and gentlemen, I present to you the first incarnation of The World of Muppet Crap! And yes, I am using italics, because it is an official thing and italics makes titles sound more important. Whenever I find an amazing piece of Muppet crap or something so truly outrageous that it must be shared to the world, I will be writing about it. This first installment must make a big impression on you, so I present The Dark Crystal dress! 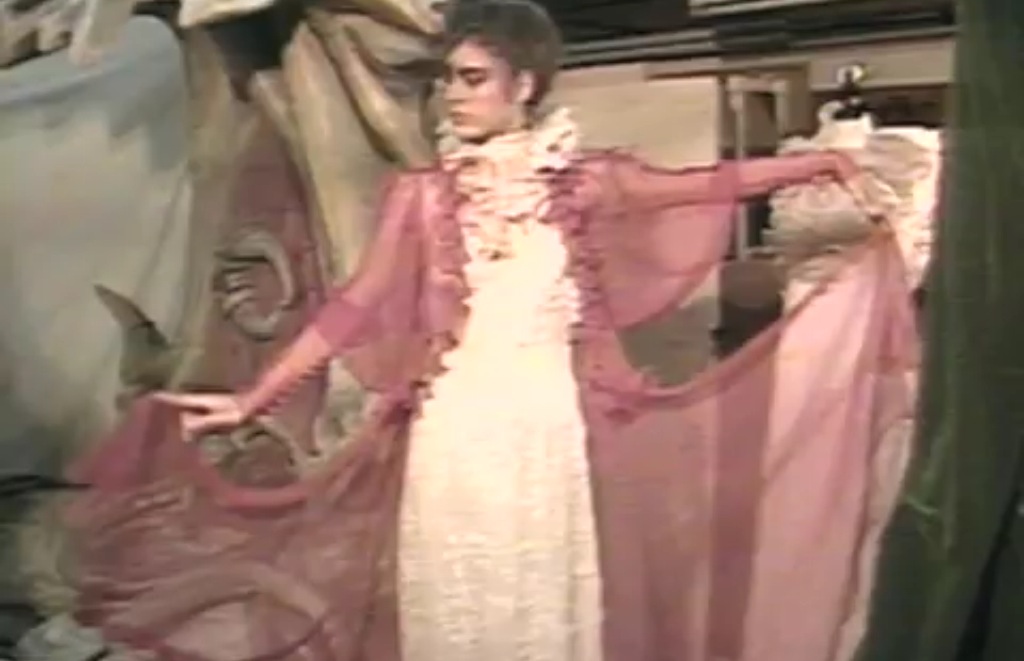 Gorgeous isn’t it? It looks like it was stolen right off the emperor’s corpse when he disintegrated into Skesis dust, except this ensemble was handmade to be worn by a 1980s fashion model or whoever felt like purchasing it from the Jim Henson Company.

It is time for the historical context part of the article, where I explain how the item came to be and place it on the Muppet timeline. Usually I will do that myself with research conducted on the Muppet Wiki, but this time I will leave to this lovely video from he Jim Henson Company:

Many movies have inspired fashion lines, Cruella de Vil’s clothing in the live action 101 Dalmatians movies comes to mind, and so The Dark Crystal is hardly alone. The creative team behind the fashion line had everything going for them: Brian Froud to lend inspiration, they worked on the original movie, and it sounds like they had some really kickin’ resumes. But this particular fashion line was not available at any fancy French designers’ boutique. Most likely due to the movie’s less than happy earnings, and it does sound more like a labor of love. Maybe the designers were plagued by Landstriders dressed in their garments and went into hiding. Did you notice that the six designers’ names are not revealed?

Face it folks! The eighties were not the high point of fashion, with leg warmers, shoulder pads, and more shades of fluorescent pink than Miss Piggy deemed to wear. We only made it into the nineties with Aqua Net holding us together and a streak of neon shoelaces tied together to grasp onto. As the video states, this haute couture fashion line has the best qualities of the present and the future. Ixnay on the last part of that quote, people.

I also love how this video details the fashion line as something people would wear everyday. All right, you can dress as a Podling and not be able to fit into your car! If there is one thing I know from watching The Devil Wears Prada and all four seasons of Ugly Betty, it’s that fashion is about art first and practicality second. 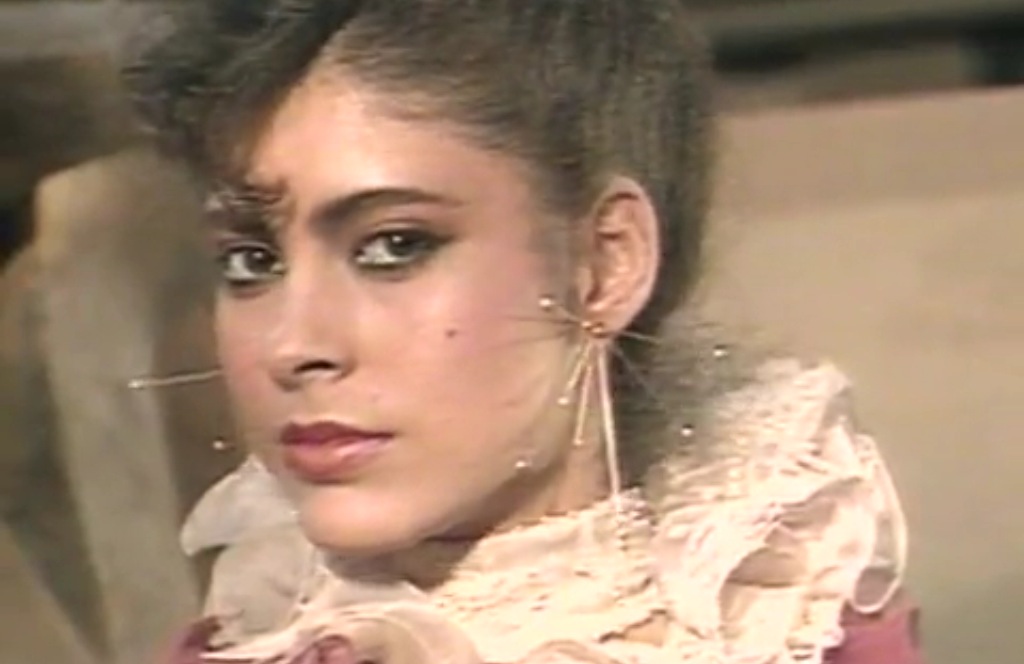 At 3:28 you can see our lovely dress in question. It is apparently made from an antique wedding veil with seed pearls on the frilly collar. In the background you can see there is more than one, so how many antique wedding veils did they buy? Also the model looks like she has acupuncture needles sticking out of her neck as she sways the gauzy maroon robe back and forth. Take off the robe and it actually looks like a dress that might have withstood the age of time, flounces and all, but then the eBay auction portrays it differently.

In the harsh fluorescent lights of modern photography, this dress does not hold up well. I have been searching the Internet for years for an actual piece of the Dark Crystal fashion line to whip out at conventions and say, “Yes, people I am this cool!” I was hoping for the Jen-inspired tunic or maybe a swanky jacket, but not this number. I bet if I wore this, people would think I was cosplaying as a female version of Ron Weasley at the Yule Ball.

It probably does not smell like Ron’s Great-Aunt Tessy.

The seller is asking a steep $1500 or “best offer.” I was thinking of putting in an offer for five bucks, but then again this really is a rare item and the first time I have ever seen a piece of The Dark Crystal fashion on eBay in the ten years I have looked. I’ll make an offer of ten dollars instead and wear it to the Labyrinth Masquerade this year.

The seller is also peddling an official crystal shard replica cast from the movie prop. It looks nice and shiny, made of glass, and it comes with a pretty white box. I have never seen this item before and there is a name “Elfra Haad” on the back. Google failed in returning any relevant results, so maybe this was a prototype or maybe a fan made crystal plucked from a gelfing’s hand with love. 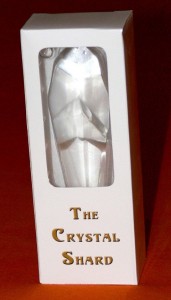 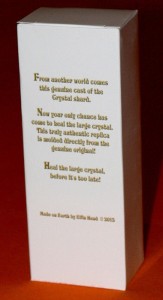 Muppet fans, take note of the dress and its handmade stitching. Most other Muppet merchandise is mass-produced in a factory in China or Taiwan, unless you go the Etsy route. If you feel like shelling out the dough for this fantastic dress, you will probably be spending your entire Muppet merchandise budget for the year. Think about it though, it really is a rare part of Muppet history and it probably be another ten years before another part of the fashion line appears on eBay.

What other wonders will the Internet yield of Muppet crap?

Click here to disintegrate into Skeksis dust on the Tough Pigs forum!