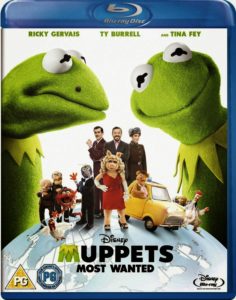 It’s not the easiest thing in the world to review a home video release of a theatrical movie.  I mean, we already reviewed Muppets Most Wanted.  Twice!  What else is there to say?  Thanks to the “Unnecessarily Extended” cut of the film, there’s a whole lot more to talk about.  12 minutes, to be precise, which is an eternity in Hollywood talk.

To start, Muppets Most Wanted is still a great movie.  I’ve seen it four or five times now, and I still laugh, sing, and grin through the whole thing.  Which is why I’m still baffled about the lower-than-expected box office returns.  So I’m pleased to see how well it holds up on a slightly smaller screen, and hopefully the sales of the DVD will be big enough for Disney to consider another film.  Okay, that’s not likely, but it’s these kinds of delusions that help me sleep at night.

My first complaint (which, unfortunately, has to be mentioned first because it is first) is the menu screen.  The last few Muppet Blu-ray releases have had vibrant menu screens, with impressive artwork or fun Easter eggs or Muppets popping up to tell jokes.  This one takes place in the interrogation room, and features the Muppets’ stock video (sort of like their stock photos, but with some motion that they can stick anywhere), which we’ve also seen in commercials, iPhone apps, billboards, wall projections at the Disney Store, and just about anywhere Disney wanted to promote the movie without paying the performers for new content.  It’s the same complaint I’ve been making for months (Years? It feels like years.) about the stock photography.  Other than photos of Constantine and the human stars, the majority of photos used to promote Muppets Most Wanted were taken for the last movie, or maybe even earlier.  Nobody wanted to invest in quality promotional materials, and so everything looks slightly dated and stale and amateurishly pasted-together.  Maybe the movie would’ve performed a little better if Disney had made a little more effort in their artwork than glorified clip-art.  Anyway, my point is: The Blu-ray menu is super lazy and not all that entertaining.  But thankfully, that’s not why anyone’s buying this thing.

The quality on the Blu-ray is out of sight.  I mean, it’s perfectly in-sight, which is out of sight.  You know what I mean.  The colors are crisp, you can see the background details very clearly, and there are tons of asides, tiny sound effects, musical cues, and other sounds that I missed before.  But that may also because, as it probably was for most of you, this was my first chance at seeing the movie without an audience.  So that means: No ambient laughter (except from myself), no candy wrappers (except for the king-sized Baby Ruth I was eating), no screaming children (just screaming neighbors, begging me to turn down the volume), and no distractions whatsoever.  It is truly the only way to enjoy a Muppet movie (along with every other way of watching a Muppet movie). 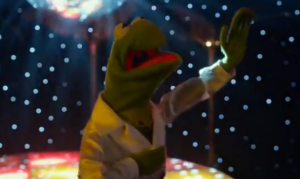 If the only reason for buying Muppets Most Wanted was to see Constantine’s chest hair in HD, then it was money well spent.

The real highlight of the Blu-ray set is the extended version of the film.  Those extra 12 minutes really make a difference.  Some changes are not so good, but most of them are fantastic.  I’m a little (okay, a lot) surprised that some of the new gags got cut, as they provide some big laughs or important information.

The most obvious additions are the ones we expected from the soundtrack: Most of the songs get extra verses, gags, and instrumentals.  “We’re Doing a Sequel” has both of Rowlf’s missing bits, in which he disses Godfather 3 and pitches a movie about a dog who’s seen something that cannot be unseen.  “I’ll Get You What You Want” has the missing verse in which Constantine promises a Hollywood star (Milton Berle’s Hollywood star, so it appears) and a potential trip to the moon.  “The Interrogation Song” revived the best verse (Gonzo’s), as well as the Swedish Chef’s translator (who, in a brilliant, I-can’t-believe-they-never-did-that-before gag, is different from the unidentified voice on the soundtrack). 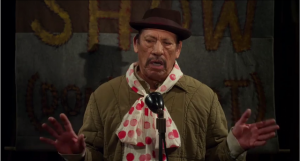 There are some terrific jokes, which I can’t believe got left on the cutting room floor for the theatrical release.  Some of my favorites included: Kermit and Fozzie’s Muppet Movie callback of “Bear left” “Right frog”.  Dominic stepping on Fozzie’s foot, followed by Fozzie’s “Ow! I mean… nothing!”  More footage at the train station.  Bunsen explaining his bomb-attracting suit (“Because it’s there, Kermit. Because it’s there.”)  Scooter confusing Christoph Waltz as Australian, rather than Austrian, to Beauregard’s dismay.  Constantine knitting his scarf for… someone.  Dominic, followed by Walter, on an escalator and skating rink.  Danny Trejo telling a joke, Fozzie-style.  Breaking the fourth wall (of the prison).  All of this stuff is gold, and none of them took up more than a few extra seconds of screentime.  Were they so pressed to cut down the length of the movie that they had to let these awesome jokes go?  At least they’re now preserved in what I’m sure will be the only version of the movie any of us will ever watch again.

We also got some scenes that were important to the plot put back into the film.  Nadya gives some important exposition of Constantine’s backstory (which, admittedly, was not as important as Tex Richman’s deleted scene from The Muppets, but it still seems necessary).  Kermit gets caught on his way to the Tower of London by Dominic, and we’re treated to his Constantine impression (which is surprisingly spot-on, since he’d never heard Constantine speak before, aside from a brief “Boo” in Plotspointburg).  Kermit gets tough with his fellow inmates, helping to showcase why they listen to him as well as why Nadya begins to fall for him.  I guess I can understand why a lot of this stuff was cut for time or for pacing, but these all seemed pretty important to the story itself. 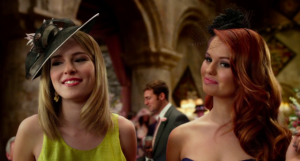 Of course, not all of the new scenes are great, and you can see why they were taken out in the first place.  There’s an instrumental in “We’re Doing a Sequel”, which features a bunch of human dancers, no Muppets at all, and no jokes or gags.  While I’m sure it’s some very impressive choreography, it definitely doesn’t need to be there.  There’s a long sequence of Jean’s car “Le Maximum” driving from London to Madrid, which stalls the scene to a standstill.  There’s a good joke about some Disney tween stars at Constantine and Piggy’s wedding where they explain that they’re there because of corporate synergy, but that’s a little too on-the-nose to be funny (especially since none of us at ToughPigs HQ know who any of them are).  ToughPigs’ Anthony Strand had the clever idea to have the wedding attendees be a Disney star, Darth Vader, and Iron Man, thus really playing Disney’s corporate synergy game to its nth degree.

The worst victim of “scenes that deserved to be cut, but didn’t need to be added back into the film” is Constantine and Dominic’s “Number One/Number Two in the bathroom” joke.  Not only is it an obvious one, and not only is it overly sophomoric, but it’s pretty much stolen from Austin Powers.  I honestly believe that there’s a good time and place for potty humor, but this one just didn’t land.  But I still have to admit that Scooter’s deadpan reaction to the cruse scene made me laugh.  Not the poop joke itself, just the unblinking stare of a Muppet with no eyelids. 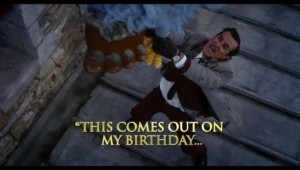 Assuming you already read our article about deleted scenes from Muppets Most Wanted, you already knew about a lot of the new stuff.  But that also means that you were just as disappointed as us to see that some of them are still missing.  We correctly predicted most of them, but the most suspiciously (and disappointingly) are in the helicopter sequence near the end.  From what we’ve heard, they filmed some scenes where Constantine kicks Kermit out of the helicopter and into the river.  Kermit gets angry (I love angry Kermit), tears off the mole, and runs up the Muppet ladder, which gets two extra rungs in the form of Sam the Eagle and Jean Pierre Napoleon.  That could’ve been a much more exciting, action-packed, and satisfying scene in which Kermit gets to play more of a hero role.  This is the most glaring missed opportunity in the film.

Also missing from the extended version of the film: More Annie Sue.  They went to the trouble of hiring Louise Gold and left her signature character in the background.  For shame, James Bobin.  For shame.

The Blu-ray also has a few cool bonus features.  Bret McKenzie’s “I’ll Get You What You Want” music video is awesome, and makes me wish we could hear him sing all of his Muppet songs in his own voice (and not his weird character impression voices, which are on the soundtrack).  The Statler and Waldorf Cut is a pretty funny gag, which only works because it’s so brief.  Rizzo gets his own little spotlight, doing his best impression of a ToughPigs writer and complaining about the film.  And there’s a long Blooper reel, which is super flub.  I mean, fun. 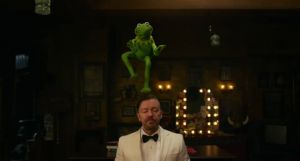 But that doesn’t mean there aren’t glaring omissions in this department either.  How great would it have been to see a behind-the-scenes look at the making of the film?  They did some awesome Bunraku-style puppetry (like Constantine’s “I’m Number One” dance), as well as scenes like the Muppet Ladder and the prison break.  Disney thinks they’re preserving the magic by keeping this stuff a secret, but they’re really just disrespecting the performers and artists who put so much time and effort and love into the project.

Also missing is the previously announced “I’m Number One” Frog-E-Oke track when you pause the movie.  Apparently this feature still exists on the digital copy, just not on the disc itself.  And in the UK, they were told that the movie would come with an “On Set with Walter, Inside The Gulag” featurette, which nobody seems to have gotten on either side of the pond.  Yet another Thing We Don’t Get to See.

Speaking of which, and I hate to sound like a broken record every time Disney releases a Muppet movie on DVD or Blu-ray, but where are the commentaries???  Sometimes we get lucky enough to get one from the director, and in even more rare cases, we get a character commentary.  But this time around: Nothing.  No James Bobin, no Nick Stoller, no Kermit the Frog, no Matt Vogel, no Joe and Ryan from ToughPigs, no nothing at all.  My disappointment (and theirs too, I assume) knows no bounds.

But in the end, none of that negative stuff really matters.  What we got was a truly great Muppet movie in brilliant quality with extra stuff that we’ll surely be watching over and over and over again.  I’m so incredibly pleased with the film, and I’m proud to own my copy of it on Blu-ray.  And I’m gonna watch it again tonight. 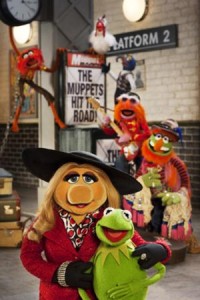 Click here to add commentary to the ToughPigs forum!