Muppets Most Wanted: The Not-Very-Spoilery Review 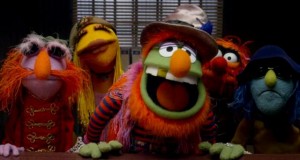 I abhor spoilers.  When there’s a movie I’m excited about, I stop reading reviews and predictions and I don’t watch trailers or previews about a month before the premiere so I can experience the film fresh.  Unfortunately, I run a Muppet fan site, so it might be irresponsible of me to do that for, say, Muppets Most Wanted.  It’s part of my job to watch all the videos and listen to the interviews and collect all the assorted data you all might be interested in knowing, while sorting out the spoilers for those of you who think that might be too much, too fast.

In that spirit, the following review will be as spoiler-free as I can manage.  I’ll be revealing certain details that we already knew from the trailers, but I’ll try and keep it to that.  On the Muppets Most Wanted premiere date, we’ll share a second, totally-spoilery review so we can finally say all the things we’ve ever wanted.

To start: Muppets Most Wanted was awesome.  I laughed through the entire film, the songs were catchy and incredibly well-written, and it was all very much in the vein of the Muppet spirit.  So, you won’t be disappointed.

The plot, as you know it, involves an evil doppelganger of Kermit the Frog named Constantine, along with his Number Two sidekick, Dominic. The criminal duo swap out Kermit for Constantine and Kermit gets thrown into a Siberian gulag. The rest of the Muppets continue on their world tour, being followed by an Interpol agent and CIA’s Sam the Eagle as they try to uncover the thief (or thieves).

One minor worry was that a Muppet movie taking place in Europe and culminating in a priceless jewel robbery would be derivative. But don’t fret, Muppets Most Wanted has very little in common with The Great Muppet Caper.  And considering that the last Muppet movie had a huge amount in common with a previous Muppet production, it’s a relief that Muppets Most Wanted contains a much more original story.

In The Muppets, we got a huge thrill out of spotting the many, many (many) celebrity cameos.  While this movie does have its fair share of celebrities (thankfully, including some that haven’t been revealed yet), I got much more of a kick from spotting the Muppet cameos.  They really upped the ante in choosing the best C- and D-list characters for background roles or one-liners, some of which will only be recognized by Muppet fanatics like us.  I can’t wait to see the movie again, if only to try and spot more monsters in the gulag or wedding guests or characters hanging in the wings of the theater.  I won’t say much more about that, but I guarantee that at least one of those cameos will make your Top Muppets Most Wanted Moments list.

Let’s talk music.  Again, not revealing anything about the songs themselves (unless you want to listen to the first song, which you can right here).  They’re all great, with a few guaranteed instant classics mixed in.  (Feel free to skip the rest of this paragraph, unless you’ve already seen the soundtrack listing or if you don’t consider song titles to be spoilers.)  My favorites included “We’re Doing a Sequel” and Constantine’s “I’ll Get You What You Want”, which is easily the most Flight of the Conchords-sounding song.  But the real winner is Miss Piggy’s “Something So Right”, which is my pick for the Academy Award nomination. Piggy has never sounded better, and Eric Jacobson absolutely knocks it out of the park with his performance.  The worst song, in my opinion (which was not necessarily shared by the people I saw the film with) is Ty Burrell’s and Sam the Eagle’s “Interrogation Song”.  Don’t get me wrong, it’s absolutely hilarious and well-written, but it’s almost entirely spoken, not sung.  So it’s the only song on the soundtrack that you can’t sing along to, nor will it ever get stuck in your head (in the good way).  But don’t worry, it’s not a clunker, just the weakest link.

Speaking of music, you’ll also be pleased to know that “Moves Like Jagger” and “The Macarena” are both only heard briefly, and neither song is played as a “Look how cool and hip the Muppets are!” moment.  However, you will have to deal with them on the soundtrack album. So.

One of the hardest parts about writing for decades-old characters like the Muppets is probably the challenge of building character growth while keeping them in the status quo.  For example, in The Muppets Take Manhattan, if Kermit and Piggy get married, their entire relationship changes, and that could be kinda weird.  So they kept it ambiguous and danced around it in interviews and everything ended up fine.  I won’t say what happens, but I was incredibly impressed as to how the Kermit and Piggy relationship danced around that line again.  It may be the best writing their on-again-off-again situation has had in 20 years, and Miss Piggy really shines with a new dimension to her personality.

How about those guest stars!? Ricky Gervais was, thankfully, reined in just enough so he could be funny and not obnoxious (not that I find him annoying, but I totally realize why a lot of people might).  Ty Burrell’s relationship with Sam the Eagle was one of the highlights of the film for me.  And Tina Fey was unsurprisingly the human MVP of the movie.  Not only does she deliver every line with perfect comedic timing and poise, but she also happens to have a lovely singing voice (with a Russian accent too!).  I was also pleased to see that none of the humans overshadowed the Muppets at all, as Gary and Mary did in the previous film.  This is the Muppets’ movie with a Muppet villain and Muppet stars.  The human beings are just decoration.

I know, I’ve probably already said too much.  So I’ll wrap things up by saying: Muppets Most Wanted was great.  Really, really great.  I don’t think any of us expect it to surpass The Muppet Movie or The Great Muppet Caper, but it’s definitely on par with The Muppets.  Maybe even better.  It’ll be hard for me to really say for sure until I see it a few more times (which, of course, I will).  But with the great music, amazing character work, and hilarious script, there’s no way you won’t be walking out of the theater without a smile on your face.

Stay tuned for more Muppets Most Wanted coverage, as well as our spoiler-filled review on or after the film’s release on March 21st!

Click here to break out of prison and into the ToughPigs forum!

A Totally Spoilery Review of Muppets Most Wanted