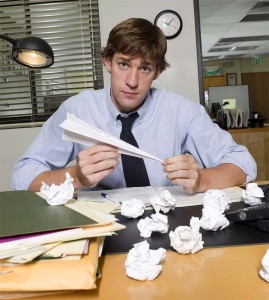 Unless you’ve been living under a rock (or if you’ve been watching CBS on Thursday nights), you’d recognize Krasinski as “Jim” on The Office. He has also appeared in films like Leatherheads, License to Wed, and (one of my recent favorites) Away We Go.

Krasinski confirmed his appearance in an interview with Collider.com. Here are the relevant bits:

COLLIDER: John, are you in the new Muppet movie?

KRASINSKI: I am, yeah. I did a small part in that movie, and it was an honor like I?¢‚Ç¨‚Ñ¢ve never had before. That was my very childlike self and my 31-year-old self, at both ends of the spectrum, being totally thrilled to be a part of that.

KRASINSKI: I think I?¢‚Ç¨‚Ñ¢m playing myself, really. I don?¢‚Ç¨‚Ñ¢t even know if it?¢‚Ç¨‚Ñ¢s deciphered. It?¢‚Ç¨‚Ñ¢s just a quick little thing. I?¢‚Ç¨‚Ñ¢m not a major part of the movie, but it was just so much fun to do. And, I really hope that this movie triggers a return of the show. I think the Muppets, in general, are a presence that are not only missed, but vital to everything else that?¢‚Ç¨‚Ñ¢s happening. They?¢‚Ç¨‚Ñ¢re a great added piece of the pie.

COLLIDER: Which Muppets did you get to work with?

So, we don’t know much about what his cameo will involve, but it’s probably safe to assume that it will include some sort of eye contact with the camera.

Click here to discuss this article on the ToughPigs forum by way of Scranton, PA!