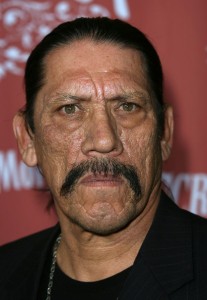 A while back, one of the many, many (many) names on our list of rumored celebrity cameos was Danny Trejo. The rumors said that he would be playing an inmate alongside Jane Lynch as the warden. Since Lynch’s role has since been debunked, it might’ve been safe to say the same about Trejo. But then we would’ve been wrong. Dead wrong.

In a recent interview for his upcoming movie “Death Race 2” (can it really top the success of Death Race 1??), he confirms his role by saying, “I am in the Muppets. Isn’t that cool?” Can’t get much clearer than that!

Trejo didn’t say what his role will be, but he did say, “I want to play one of the Grumpy Old Men! I want be like ‘Shut up!’ – one of those guys sat up in the balcony.” Hey, if Trejo wants to be one of the hecklers, then he should play a heckler. I mean, I wouldn’t want to be the guy to say no to him.

The Muppets are Ready for Their Closeups