Statler & Waldorf never got a chance to become old men, and that’s heartbreaking.

For the past 25 years, Jim Henson and Richard Hunt have been inextricably linked by their early deaths (Jim was 53, and Richard was just 40). Jim’s death would have been a huge blow to the Muppets no matter what, but losing Richard made it so much worse. I truly believe that if the Muppets had still had Richard’s lively, infectious spirit, the 1990s would have looked very different (and probably a lot funnier). But before their sad demises, Jim and Richard did a ton of incredible work together, and that’s what we’re here to celebrate today. 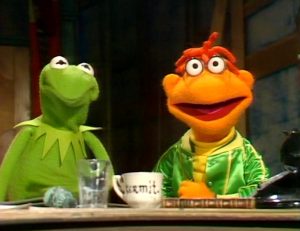 The two old men in the balcony are their best-known pairing, but as equals, they’re also an outlier among the characters Jim and Richard played together. In real life, Jim and Richard had something of a mentor/mentee relationship, and a lot of their best on-screen work shared that same dynamic. Over and over, Jim played the man in charge and Richard played his assistant, his employee, or his devoted servant.

Without question, Kermit and Scooter are the Muppet duo that best reflect reality. In both cases, Jim/Kermit was the boss and Richard/Scooter was the young, excited employee. Scooter was Kermit’s right-hand man, and Richard literally performed right hands for Jim’s characters. 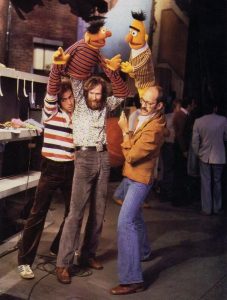 More importantly, Richard really was a teenager when he started performing with the Muppets, and Scooter was intended as a reflection of that youthful enthusiasm. In real life, Richard called Jim and asked him point-blank for a job interview. Similarly, Scooter just showed up and told Kermit that he worked at the Muppet Theatre. Richard Hunt wasn’t Lew Grade’s nephew, of course, but Scooter’s confidence and chutzpah came straight from him. 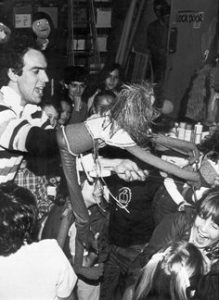 In Of Muppets & Men we hear a lot about Richard’s antics behind the scenes of The Muppet Show, entertaining visitors and keeping the mood light during filming. Scooter serves a similar purpose within The Muppet Show itself, easing the guest star into the Muppets’ world at the beginning of almost every episode. Jim trusted Richard to put on a show for anyone who came to visit, and Kermit trusted Scooter to make humans comfortable in the Muppet Theatre.

In his role as the Clown Prince of the Muppet performers, Richard injected his work with his own sensibility. Other performers, such as Dave Goelz, have talked about how Richard was the best improviser of the troupe. Similarly, Scooter spent a ton of time backstage pushing his own schemes, from getting Muppy in the show to leading the Sylvester Stallone Fan Club. Kermit, meanwhile, spent a lot of time keeping Scooter on task. I imagine that paralleled reality as well.

When Kermit and Scooter presented at the Oscars together in 1986, host Jane Fonda called Kermit a movie star while Scooter was “still waiting for that big break.” She wasn’t wrong. Scooter got very little to do in the movies, but for precisely the same reason he was so important backstage on The Muppet Show. More than any other character, Scooter was built for the Muppet Theatre specifically. Kermit doesn’t need a gofer when he’s on a road trip to Hollywood, writing for a newspaper, or working at Pete’s Luncheonette. But in the Muppet Theatre, Kermit couldn’t quite function without him.

Jim and Richard’s real-life mentor/oddball apprentice relationship is reflected in other places as well. The Oklahoma! sketch is one of Sesame Street’s all-time classics, and it’s all about Kermit trying to keep control while Forgetful Jones stalls through the entire half-day before lunch. Richard wasn’t in the habit of actually wasting studio time, of course – by all accounts, he was a consummate professional – but he was always a much looser, sillier presence than the more work-minded Jim. 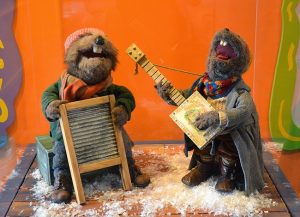 In Emmet Otter’s Jugband Christmas, the two play Harvey Beaver and Charlie Muskrat, the less-important members of the group. When we first see them, Jim’s Harvey is clearly in charge, with Richard’s Charlie as his hype man and sidekick. Harvey comes up with the idea for the Jugband and assigns all of the parts, with Charlie mostly on hand to talk about how good he is (at least according to his mom). Charlie doesn’t get to show off much of Richard’s signature humor, but he’s still faithfully by Harvey’s side.

It even shows up in places that don’t really make much sense. In the Up and Down Opera, Placido Flamingo pledges his allegiance to Ernie, singing “And if you go upstairs, that’s where I’m going too/And when you go down, there’s where I will follow you.” Even though Richard was the better singer, and Placido does all of the heavy vocal lifting, he still defers to Jim’s leadership. 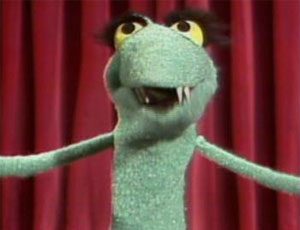 When Don Music can’t think of lyrics for new hits like “Twinkle, Twinkle, Little Star,” he turns to Kermit the Frog for help. Kermit’s gentle guidance ends up turning into Kermit re-writing every single lyric. Don Music takes all the credit for himself, but even that could be a reflection of the way that Jim was always happy to let his fellow performers take the spotlight (let it be noted that Kermit isn’t nearly as happy about it as Jim would have been).

In the Steve Martin episode of The Muppet Show, Richard plays Lenny the Lizard, a snarkier, cruder stand-in for Kermit. Richard’s spiked delivery seems to be poking fun at how straight-laced and straight-forward Kermit was as an MC. Matt talked the other day about Steve Whitmire carrying on Jim’s legacy, and how Steve has made Kermit his own. It’s easy to imagine that in an alternate universe where the role went to Richard, he might have remolded Kermit in his own image, giving him a Lenny-style harder-edge. 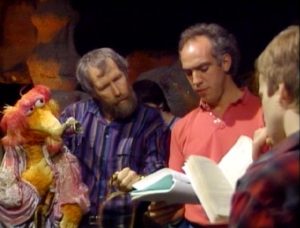 That didn’t happen, of course, but in 1987, their roles did reverse. Richard directed “Honk of Honks,” the last Fraggle Rock episode that Jim performed in as Cantus. After nearly two decades as one Jim’s most trusted accomplices, Richard was the one calling the shots. In this behind-the-scenes photo, both men (and Cantus) look quite serious. I’m sure Richard was thrilled to be given this responsibility, and Jim was equally happy to see Richard achieve it.

In a very real way, this was what Richard’s entire career had been building towards. He was the youngest of the five core Muppet Show performers, and was always kind of the “kid” of that group. But he was also a key presence behind the scenes on The Muppet Show, so he was a natural to take on more off-camera responsibility. It’s a real tragedy that he didn’t get to continue down that path. We can only imagine what he would have brought to the Muppets in the 1990s and beyond, but I’m sure it would have been wonderful. He learned that from Jim. 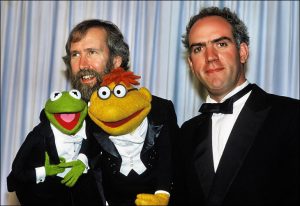 Click here to bring up “Danny Boy” by the Leprechaun Brothers at the last minute on the Tough Pigs Forum.