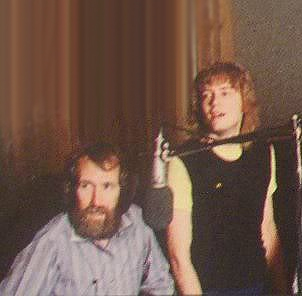 I was just a few days away from my fifth birthday when Jim Henson died. I remember distinctly the moment I found out. My mom woke me up early, much earlier than my not-yet-in-school self was used to. She gently shook me and told me to come downstairs, that there was something on t.v. that she and my dad wanted me to see. My older sister was at school and my younger brother was less than a year old, so I assume he was there, or he could have been sleeping – either way I don’t remember him being in the room. In my mind, it was just the three of us, my parents and me.

I was disappointed at first that it was a news report and not a cartoon that they wanted me to see. What could have possibly been so important that didn’t involve Goofy? But as the images flickered across the screen, and the talking heads of The Today Show were replaced by Muppets, I thought to myself, “Yes. This is worth being awake for. Thank you, Mom.” It took a little while for it to set in for me that they were talking about Jim Henson. And even longer that they were talking about him in the past tense. 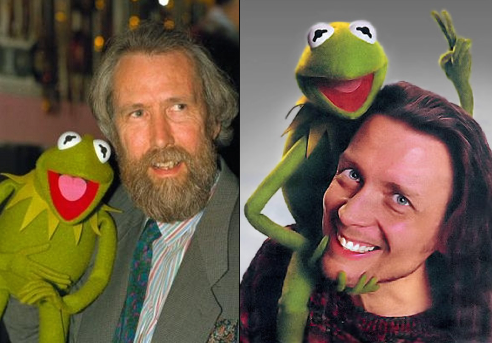 Both of my parents, and my father especially, never hid from us the fact that the Muppets weren’t quote-unquote real. I’ve always had the feeling that they appreciated the craft and hard work of puppetry in their own way, and wanted their children to grow up with the knowledge that yes, magic can be real, and wondrous things can happen in life, but there are also things that take skills and practice to do, and those should be celebrated just as much.

I also remember the many times I had seen Jim Henson on talk shows and in interviews, and at that point in my life I knew his face just as well as I knew Kermit’s. The late 1980s was still a time when puppeteers like Jim would appear on t.v. without a box to hide them, talking frankly and openly about the talent it takes to manipulate these characters, unlike nowadays when Miss Piggy appears on a talk show and there’s never a single mention of the person underneath her. I have very early memories of what must have been prime-time reruns of Johnny Carson on The Tonight Show remarking to Jim that when he has Kermit on his hand, and he can still clearly see the tall, bearded man who created him, he only talks to the frog. Keeping the magic alive while still showing these talented individuals seated in plain view is something myself and others have preached for many years, so I’ll do my best to not go too far down that path. It’s not very important to this particular story.

Back in 1990, as I’m watching this news report and putting the pieces together, hearing the newscaster talk about what a tragedy it is that the world lost such a loving soul, it hits me that Jim Henson has died. And it hits me hard. Harder than I think my parents thought it would. I had experienced some forms of death already in life – an aunt and a cat, if I recall correctly – but this was someone that I had never met and didn’t know, so I’m not sure that they realized how sad the news would make me. 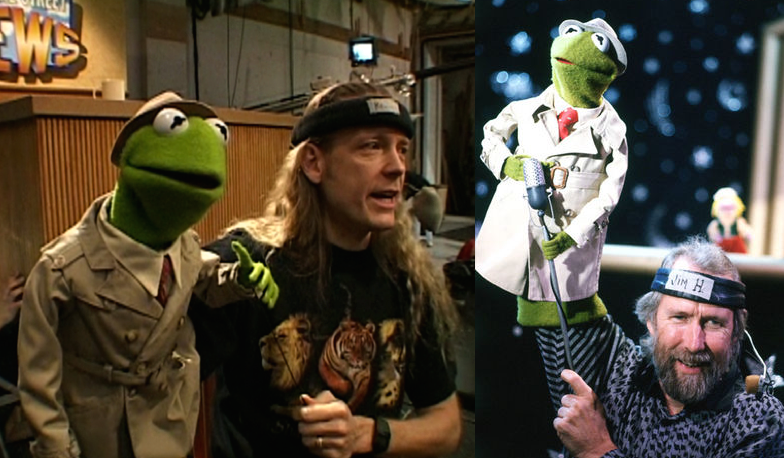 But the thing is, I did know Jim. In my own way – in everyone’s own way, whether or not they were alive when he was, and whether or not they’d ever met him – everyone knows Jim Henson. We know his spirit, which encourages and inspires and uplifts in ways that we might not see but can always feel. We know his words, which have carried on long after he’s left us to make us laugh and feel and cry and think. We know him. So that moment, when I learned that he would no longer be around to create new movies and t.v. shows and specials, or charming creatures, or magical worlds, is a moment that I will carry with me forever.

Later that day, our local newspaper boy came to collect the money for our subscription. As my dad looked for his wallet, I came out on the front porch and talked to him. With fresh tears in my eyes, I looked up at him and said, “Our friend Kermit died today.”

“Cute, Matt. Cute story. But I thought this week was going to be about pairings. What does all that have to do with Steve Whitmire?”

Good question. Allow me to explain.

At that moment in time, there wasn’t a person alive who hadn’t considered the distinct possibility that we might never again see Kermit the Frog. Voice actors being replaced as they retire or pass away has been a constant ever since characters like Mickey Mouse and Bugs Bunny became long-running perennial favorites. But there’s a sense of removal for cartoon characters – a step back between the animated figure and the voice in the booth. Puppeteers are more present and at this time were making regular appearances, so there was still a connection made in the public’s eye. And let’s not forget to stress that puppeteers are not just the voices, they are the actors and embodiments of the puppets they manipulate. And Jim Henson, especially, was well-known to the world at large. After all, he created the whole ragtag group, and no matter how much he said he used puppetry to hide himself, he was most certainly just as well-known as his creations by the time he passed away. So the idea that anyone else would take on the role of Kermit – an idea that most people in the world never saw as a role, but more as an extension of Jim himself – was jarring to say the least. 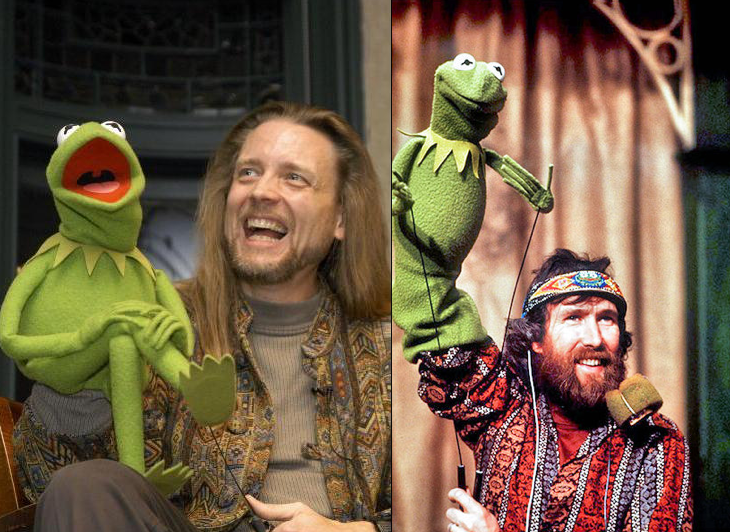 Jane Henson commented once that Jim told her that if anything happened to him, Kermit must go on right away, and that because of Kermit’s significance, Jim had already chosen a replacement for him. In interviews, Steve Whitmire has talked about how the idea for him to perform Kermit was floated around internally before Jim passed away, not to Steve directly but between Jim and Frank Oz and possibly a few others at the Muppets and within the Henson family.

Jim and Frank had been so busy with so many things, and their careers both within and outside of the Muppets were taking off in exciting ways, that they knew that there might come a time when they were too busy to play their characters every time they were needed. So they had talked about the idea of replacement performers, and Steve was on the short list (and for all we really know, the only one on the list) to perform Kermit should Jim be busy. I don’t think anyone would have guessed that this would also be the plan if Jim passed away. This is an excellent indicator that Jim trusted Steve – deeply. You don’t hand off a character that you’ve been performing for 35 years straight, a character that embodies so much of yourself and that the entire world identifies as belonging to you and you alone, to just anyone.

Brian Henson was the one to formally ask Steve about it, at a meeting he set up with him and Jane and Frank, and the Henson children were all in full support of Steve taking over. Heather Henson arranged for a Kermit puppet to be sent to his home in Atlanta, and when he received it, he noted that it still smelled like Jim. He put it on in front of a mirror, and stood silent as Kermit looked back at him, seemingly encouraging him to say something, anything. But he couldn’t. It scared him, and he put the puppet away on a shelf in another room and didn’t look at again for almost a month. One day, Brian called him and asked for a recording to see how it was coming along, and Steve sent him a tape of himself singing “Bein’ Green.” Then a short while later, Steve made his debut as Kermit on the special The Muppets Celebrate Jim Henson. And ever since then, Steve has been Kermit’s main performer and has taken him to amazing new heights.

As we all know now, my almost-five-year-old self’s statement that Kermit had died is not true. Thanks to Steve Whitmire, Kermit the Frog has so far outlived his creator by 26 years. And in that time, Steve has performed Kermit in five feature films and two t.v. shows, as well as in television specials, music videos, webseries, and more. He’s received an honorary doctorate and a star on the Hollywood Walk of Fame, and has evolved in a way that no frog has in 4.5 billion years. He’s gone far beyond simply doing an impression of Jim’s Kermit – Steve has taken Kermit leaps and bounds beyond what he was in 1990. You’d be lying if you said that the Kermit on The Muppet Show and in The Muppet Movie was the same Kermit in The Muppets (film) or The Muppets (TV show). Steve has added layers to him that no one could have predicted, to the point where I think even Jim himself would be surprised. And delighted.

So yes, I could’ve followed the format that other articles on Tough Pigs will take this week and told you about how there will never be a pairing as great as Kermit and Waldo C. Graphic performing together in Muppet*Vision 3D, but that would’ve been shoehorning in a subpar pair to fit the theme. At one of their last meetings together, Jim mentioned to Steve that he didn’t really have his own character within the main Muppet troupe, and Jim would be working on that. So maybe if Jim hadn’t passed when he did, this article would’ve included some pairings with whoever that character would’ve been. But the bigger picture I wanted to paint was the one of Jim and Steve collaborating on the same character, even if it wasn’t at the same time. After all, September 24th is Steve’s birthday, too. And I think Kermit would want them both to be celebrated today. 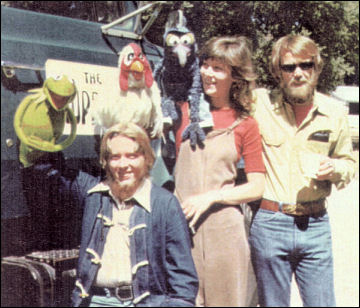 Click here to keep the Frog alive on the Tough Pigs forum!