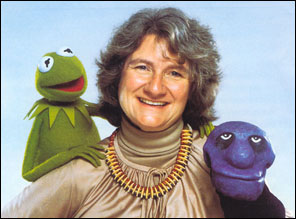 We are saddened today to learn of the passing of Jane Henson at the age of 78.  The news comes via a memorial page on the official Jim Henson Company website.  In the days to come, she will probably be most frequently referred to in the news as “Jim Henson’s widow,” but Muppet fans know she was much more than that.

If you were to ask the average person to name Jim Henson’s first Muppet collaborator, a lot of them would probably guess Frank Oz.  Many fans might even say Jerry Juhl, who was hired before Oz.  But before either of those guys, there was Jane Henson.

After meeting Jim in a puppetry class at the University of Maryland, Jane Nebel worked with Jim on the rarely-mentioned local TV show Afternoon with Inga, and then throughout the run of Sam and Friends and on a bunch of early commercials — as far as I know, she puppeteered the Wontkins to Jim’s Wilkins or vice versa for all of those classic Wilkins Coffee ads (Jim prerecorded the voices).  While Jim was quietly revolutionizing TV puppetry and advertising, Jane was right there beside him.  She was history’s second-ever Muppeteer.

In 1959, Jim and Jane got married and soon started a family, which would eventually include five children: Lisa, Cheryl, Brian, John and Heather.  As the kids were  born and Jim added Juhl, Oz, Don Sahlin, and others to his team, Jane stepped away from performing.  The last production she was credited for performing in was the Joel Grey episode in season one of The Muppet Show, but I would not be surprised at all to learn she occasionally lent a hand or two to one of the various huge Muppet group shots over the years.

And that was far from the end of her contribution to the Muppets.  Jane remained involved in the Muppet organization in what seems to have been a trusted advisor/consultant role, showing up in several of the stories and anecdotes from Muppet history that fans know well.  Before Steve Whitmire met Jim Henson, he essentially auditioned for Jane at an airport, and she gave him her stamp of approval.

Jim and Jane separated in the mid-1980s, but they retained a friendship that lasted until Jim’s untimely death.  As recounted in the Sesame Street history book Street Gang, he called on her for support during what would turn out to be his last night.

Perhaps her most important accomplishments, however, have been more recent and more low-profile.  At the unveiling of the Jim Henson and Kermit statue at the University of Maryland, Jane summed up Jim’s importance:

And for the past couple of decades, Jane worked to guarantee that Jim’s work and philosophy would in fact live on.   She founded the Jim Henson Legacy,  which has ensured that the Henson oeuvre continues to be seen and appreciated by audiences.  The Legacy has been responsible for countless projects over the years, including the recent Jim Henson’s Fantastic World museum exhibit, which no doubt introduced thousands of young people to the man behind the Muppets.  The Jane Henson Foundation was also among the financial sponsors of that exhibition.  A few years ago, she donated the original cast of Sam and Friends puppets to the Smithsonian (inexplicably, the puppets are currently not on display, but it would be a nice gesture for the museum to bring them back out of storage as a gesture to the Hensons’ legacy).

I haven’t even mentioned the Jane Henson Foundation’s non-Muppet-related activity — much of it was for furthering the cause of puppetry, but here’s a news item about a $5,000 gift to a Maryland high school to help them get to a music festival in South Africa.  Mrs. Henson may not have gotten her name in the credits of many movies or TV shows, but she made a lasting positive impression on the world.  Today we mourn Mrs. Henson, but we also celebrate her life and her vital contributions to the Muppets.  Thanks, Jane.

Let’s Get Frank: Frank Oz’s “Ask Me Anything”