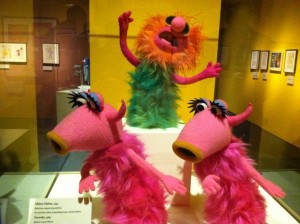 Jim Henson’s Fantastic World officially opens on Saturday at the very sleek and sexyMuseum of the Moving Image in New York City. That happens to be the city in which I reside, so I’m pretty happy about this development, especially considering the fact that the exhibit has previously only been to many of the cities in which I do not reside.

Tough Pigs got a sneak peek earlier this week, and… well, would it be too obvious to say it’s fantastic? As a Muppet geek, I heartily recommend Fantastic World to other geeks. But I would also recommend it just as heartily to civilians — those who have fond feelings toward Henson’s most popular work, but who aren’t as familiar with the stuff in the margins of his career — because those people are going to learn a lot they never knew about the guy who invented Ernie. “Jim Henson worked on a psychedelic nightclub?” they might say. “He sold coffee using violent, 5-second commercials?!” Of course, there’s plenty of Muppet Show material, and a good dose of Sesame Street, but those productions really aren’t given priority over the lesser-known projects, and the point of the exhibit is to present a comprehensive overview of just how crazy brilliant Jim Henson was. 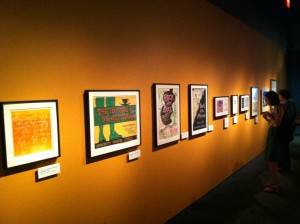 I don’t know how Fantastic World was laid out in other museums, but at the Museum of the Moving Image, it’s set up in a very logical way, so you experience different phases of Jim’s career as you walk through: Early artwork leads to Sam & Friends, then commercials, then the Muppets’ rise to international domination of the entertainment industry, and so on. The story of Jim and his creative process is told through lots of original drawings, scripts, storyboards, and various other artifacts. I had seen images of many of these things before in books like The Works and Designs & Doodles, but there’s nothing like the thrill of viewing the Muppet Show proposal cover page with your own two eyes and letting it sink in that you’re actually inches away from a thing with Jim Henson’s fingerprints on it. 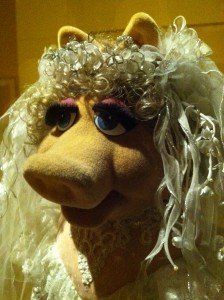 For a lot of visitors, the biggest thrill will be the original puppets sprinkled throughout the gallery. It’s pretty great when you’re walking along and you turn a corner to see Bert and Ernie, or Miss Piggy looking fetching in her Muppets Take Manhattan wedding dress, or, perhaps most exciting of all, Sir Linit. It was an obvious choice to put Kermit at the beginning of the walk-through, but it’s a good one, because everyone will be happy to see Kermit — in fact, Fredi Adelman (of the exhibit’s co-organizer the Smithsonian Institution) told us that one of the few problems venues have reported with the exhibit is that they have to keep wiping down the frog’s glass display case because children are constantly kissing it. I’m not certain, but I believe this fact qualifies Fantastic World as the Most Adorable Museum Exhibit Anywhere. I did not personally kiss any of the display cases, but I wouldn’t judge anyone who does.

By the end of the exhibit, casual fans (and maybe some of the young’uns who weren’t around for the Muppets’ heyday) should have a new appreciation for the constant parade of creative ideas that was Jim Henson’s mind, while the geeks should get a big kick out of seeing so many pieces of Henson history up close. I don’t want to give away too much for those who are planning to see it, but I want to mention a few more highlights:

–Timepiece gets a lot of love in this exhibit. It will be playing on a loop in a viewing room at the museum… 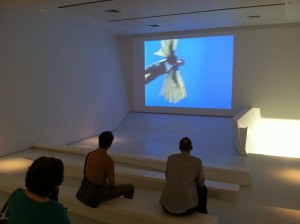 …and in the gallery you can see some of Jim’s storyboards for it… right next to a monitor featuring a side-by-side comparison of storyboard vs. finished film, which shows just how fully formed the whole crazy project was in Jim’s head before he even shot a frame of it. However, it should be noted no artifacts present provided an answer to one of the most pressing Timepiece questions, namely: How the heck did Jim get the permission to paint an elephant?

-It was great to see a banner called “Jim’s Closest Collaborators,” which lists performers, puppet builders, writers, composers, and other creative greats who worked with Jim, but who are too often overlooked by the general public. In alphabetical order, even!

-I love the idea of this beanbag-seating viewing area full of kids watching a montage of Muppet stuff: 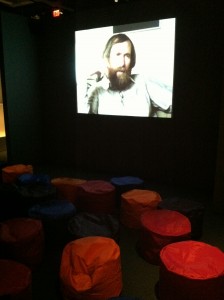 -Hey, did you know “The King of 8” originally had two alternate endings? Here’s one of them, as seen in Jim’s storyboard (click to make it bigger): 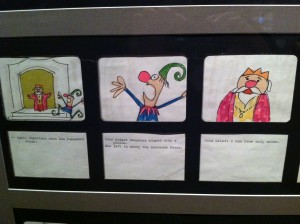 -Here’s a great suggestion made by some of the folks involved in putting on this whole shebang: The museum is doing a ton of screenings in conjunction with the exhibit, from compilations of rare material (“Muppet History 101”) to classic favorites (The Muppet Movie) to more recent stuff that nobody likes (Muppets From Space), and several of these screenings will be introduced by special guests. So for maximum Henson impact, you should schedule your visit for a day that includes one of these screenings. The complete (so far) schedule is right here on the museum website.

-In case all the little signs and displays aren’t informative enough for you, you can download an audio program companion to the exhibit in MP3 format, right about here on the museum’s website.

-A public service announcement: We’ve been told that, depending on demand, the museum may institute a “timed admission” system to the exhibit, just to make sure too many bodies aren’t crammed into the gallery all at once like a can of tuna. Being barred from entering a Jim Henson exhibit due to its huge popularity is the best possible reason I can think of to be barred from entering a Jim Henson exhibit.

In conclusion: If you live anywhere remotely near Queens, New York, you have no reason not to check out Jim Henson’s Fantastic World. And keep checking Tough Pigs for updates on future exciting Fantastic World-relatedgoings-on! 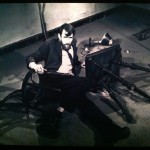 Also: Jim Henson‚Äôs Fantastic World was organized by The Jim Henson Legacy and the Smithsonian Institution Traveling Exhibition Service in cooperation with the Henson family, The Jim Henson Company, The Muppets Studio, LLC, and Sesame Workshop, and was made possible by the BIO channel, with additional support by The Jane Henson Foundation and Cheryl Henson.

REVIEW: Yes, The Muppets Take the Bowl Was Great

One of These Swings: Sesame Street’s Live Jazz Concert