A couple weeks ago, I attended a Sesame Street panel discussion entitled “Making Learning a Funny Affair,” one of the events being held at the New York Public Library for the Performing Arts in conjunction with the “Somebody Come and Play” exhibition.

The event was moderated by Bobby Moynihan of Saturday Night Live, and at one point the conversation turned to Sesame Street‘s success with using YouTube to reach more kids with their content.  Moynihan asked Sesame Workshop’s Carol-Lynn Parente and Rosemarie Truglio to name the most popular Sesame video on YouTube.

Because I’m a robot-like Sesame geek, I immediately tried to guess what the answer would be, considering every possibility in the milliseconds before the panelists gave their response.

There was a good chance it was one of the all-time classics, like “Rubber Duckie” or “C Is for Cookie.”  On the other hand, it could be one of the show’s recent viral mega-hits, like “Share It Maybe.”  Oh, or maybe it would be a popular celebrity appearance… Will.i.am’s groovy tune “What I Am” certainly racked up the views when it premiered.

I was wrong on all those guesses.  In fact, I didn’t even recognize the actual answer at first.  It was “Elmo’s Ducks,” which as of this writing has 74,953,830 views.  Seventy-four million, nine hundred fifty-three thousand, eight hundred thirty!  That’s almost 75 MILLION views!  Why, if you stacked all those views on top of each other, they’d be taller than the Great Wall of China.  As soon as I got home from the panel, I had to watch the video myself.

So there it is.  But why do people like it so much?  Why have YouTube users flocked to it, like… like some kind of animal that travels in flocks?  Why is it the most popular Sesame Street video on YouTube? Well, I have four theories about why “Elmo’s Ducks” speaks to its audience in such a meaningful, profound way.

1. Viewers watch the video for a comforting message about the cyclical nature of the economy.  Elmo had four ducks, the song says.  Then he had three, and then two… and before he knows it, he has no ducks at all.  Does that sound familiar?  It should.  This is exactly what has happened with the U.S. economy numerous times throughout the nation’s history: Periods of great prosperity, when everyone has a lot of money (ducks) are followed by dry spells, when even the most waterfowl-rich citizens are at risk of losing all their ducks.  But if they can hang on and make wise investments, they might just be able to ride it out until the next time things are booming… or quacking, if you prefer.  If you’re not convinced, consider this: Ducks have bills.  If you’re still not convinced, consider this: “Ducks” rhymes with “bucks.”  If you’re still not convinced, consider this: If you change just a few letters, “NASDAQ” becomes “NASDUCK.”  Now you are convinced. 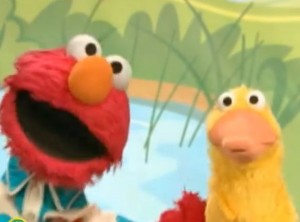 2. Viewers watch Elmo to pick up some guitar skills!  Elmo is not even four years old, but in this song, he plays the guitar like a seasoned pro.  While singing along, he never misses a note, which is especially impressive when you consider the fact that he never moves his fingers on the frets.  How many of those 75 million views do you think are Carlos Santana, Slash, and Jimmy Page hoping to improve their game by learning Elmo’s technique?  At least three, I bet. 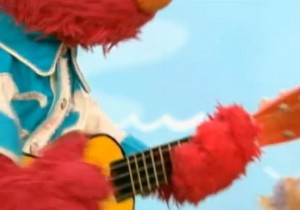 3. Viewers sympathize with the video’s tale of loneliness.  It’s an inevitable part of life: We make a friend, we become close, and we enjoy that friend’s presence in our life, and then one day we find we’ve drifted away from that friend, and the relationship just ain’t what it used to be.  In fact, you’re probably picturing such a friend from your life right now.  Keep picturing that person, but add feathers and a beak, and remove the ability to speak, and it’s exactly like what happens to Elmo in this video.  People just might be drawn to this video because they recognize themselves in Elmo.  Because they ARE Elmo. 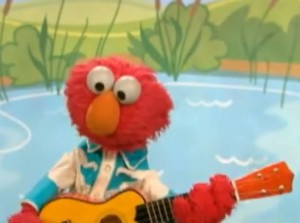 4. Little kids like Elmo and ducks and watching the same videos over and over.  I mean, this is one possible explanation.  But it’s probably one of the other ones. 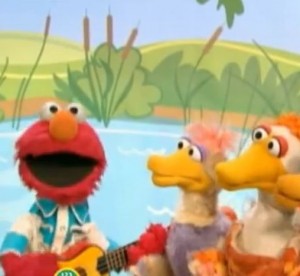 P.S. After I wrote all this, I happened to notice that “The Alphabet with Elmo and India Arie” actually has 9 million more views than “Elmo’s Ducks.”  But let’s pretend we never saw that.

Click here to waddle with me on the Tough Pigs forum!