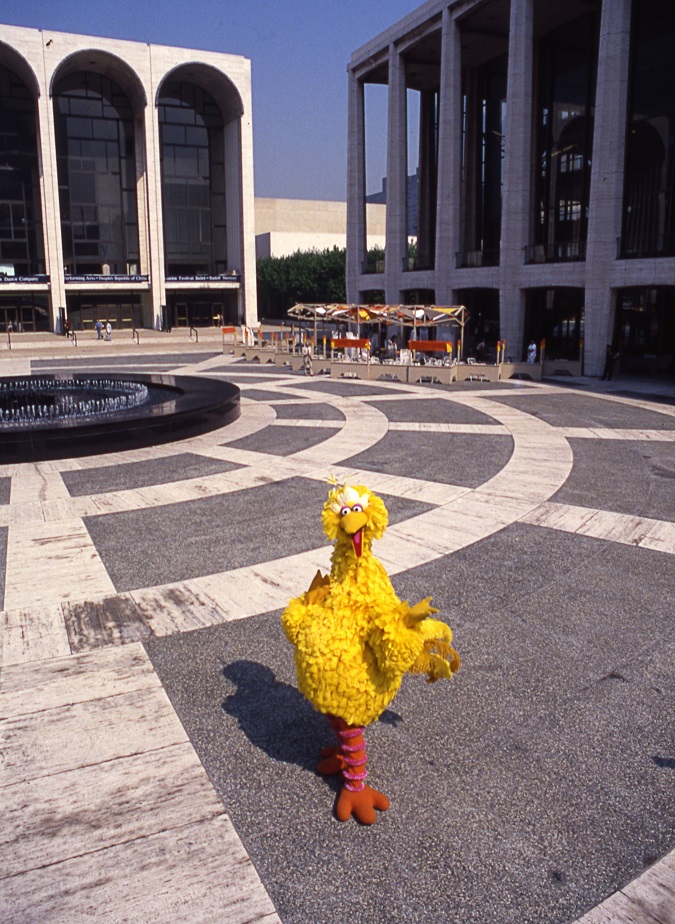 If you follow this here website, you already know about “Somebody Come and Play,” the Sesame Street 45th anniversary exhibition at the New York Library for the Performing Arts at NYC’s Lincoln Center.  And if you live in the NYC area, chances are pretty good you’ve already been there and taken a selfie with Snuffy.  But if you haven’t been yet — or if you’re thinking about going again — you may be interested to know about the following events, panels and screenings.  It starts with Family Day…  which is TODAY!  Hurry!  Run to Lincoln Center with your kids!

The Library for the Performing Arts will open on Columbus Day for families to visit “Somebody Come and Play”. Enjoy storytelling, giveaways, games, plus a visit from a Sesame Street walk-around character. Complimentary goodie bags for the first 50 children under 10 years old.

How do you make teaching letters, numbers, and health fun and memorable? Make it funny! Sesame Street’s Executive Producer Carol-Lynn Parente, Muppet performer and Head Writer Joey Mazzarino and Senior Vice President of Global Educational Content Rosemarie Truglio will discuss how the show blends an educational curriculum with the art of comedy. Get an insider’s perspective on the process behind the scenes at Sesame Street and see how the team delivers learning and laughter for the entire family.

This program is intended for adults. Advance registration required. Visit nypl.org/sesamestreet for details.

When a meddling social worker arrives on Sesame Street, Big Bird is soon sent to live far away with his “own kind,” the Dodos. Lonely and homesick, Big Bird sets off on foot to find his way home, making a lot of new friends along the way. Directed by Ken Kwapis. 1985, 88 minutes.

FILM – The World According to Sesame Street

This documentary explores the complexities behind producing international versions of Sesame Street. The film follows productions in Bangladesh, Kosovo, and South Africa, and examines how producers from New York’s Sesame Workshop take the iconic American television show and localize it with indigenous songs, puppets, and curricula while facing cultural, political, and production challenges. Directed by Linda Goldstein Knowlton and Linda Hawkins. 2006, 104 minutes.

This program is intended for patrons 12-years-old and above.

KID’S FILM – The Adventures of Elmo in Grouchland

Elmo loves his fuzzy, well-worn blue blanket better than anything in the whole world. In fact, they are inseparable…a perfect team. Elmo would never let anything happen to it; until a tug-of-war with his friend Zoe sends his beloved blanket into a faraway land and puts Elmo in hot pursuit. Directed by Gary Halvorson. 1999, 73 minutes.

The creators of Sesame Street pioneered a new approach to early childhood education 45 years ago when they set out to use the power of television to help prepare young children for school. Today, Sesame Street continues to evolve with the media landscape to reach children with educational content in new ways. Join the creative team from the Sesame Street Innovation Lab as they show how they utilize multiple platforms and new technologies to create Sesame Street video games, websites, and mobile applications enjoyed by families around the world. Plus, get a peek at a brand new interactive game created by the Sesame Content Innovation Lab and Gigantic Mechanic.

This program is intended for adults. Advance registration required. Visit nypl.org/sesamestreet for details.

On the Street Where You Learn: The Intersection of Broadway and Sesame Street

What’s Sesame Street‘s most famous cross street? Broadway! Many of the Sesame Street songwriters have also enjoyed careers on Broadway. Join Sesame Street‘s Music Director Bill Sherman, Tom Kitt, and Lin-Manuel Miranda for an evening of song and conversation about the intersection of Broadway and Sesame Street.

This program is intended for adults. Advance registration required.  Visit nypl.org/sesamestreet for details.

“Somebody Come and Play”: 45 Years of Sesame Street Helping Kids Grow Smarter, Stronger, and Kinder will be on display in the Donald and Mary Oenslager Gallery, Shelby Cullom Davis Museum at The New York Public Library for the Performing Arts located in Lincoln Center from September 18, 2014 through January 31, 2015.

Click here to blend an educational curriculum with the art of comedy on the Tough Pigs forum!