A whole mess of tweets, Facebook posts, and blog comments about puppets and chicken have flown around the internet since July 20th.

That’s when the Jim Henson Company announced that, after some recent public comments made by Chick-fil-A CEO Dan Cathy concerning same-sex marriage, Henson would be ending its partnership with Chick-fil-A and donating the profits from their Creature Shop kids meal toys to the Gay & Lesbian Alliance Against Defamation.

Now here’s a new development to keep the wheels of this controversy turning for a while: As seen in a photo posted on the Facebook page Wipe Out Homophobia, at least one Chick-fil-A restaurant has posted a notice stating that the Henson Creature Shop toys have been recalled for possible safety reasons. 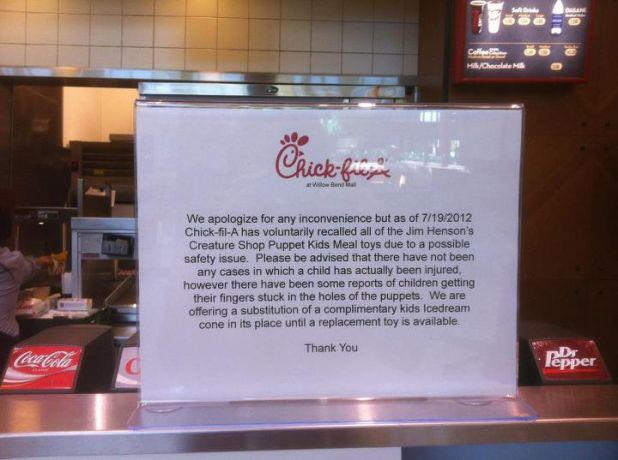 So… they’re recalling them because there’s no problem with them, but there might be?  The timing certainly seems suspicious, although it’s interesting to note that the sign is dated July 19th, a full day before Henson’s announcement.  Did Chick-fil-A corporate headquarters know about Henson’s decision and immediately alert their franchisees to post this notice?  Are all Chick-fil-A’s posting this sign, or did this particular store take it upon themselves to do so?

Or are we just being paranoid, and it’s just a coincidence, and there really was a safety concern?  After all, kids can’t eat chicken nuggets with puppets stuck to their fingers.

Thanks to Tough Pigs’ own Jamie for the alert! Click here to wonder how much these toys will end up going for on eBay, on the Tough Pigs forum!