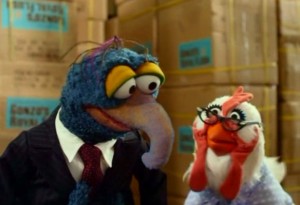 According to a Facebook post made by The Jim Henson Company earlier today, they are getting out of the chicken game.

Due to some terrible statements and actions on the part of Chick-fil-A, which support anti-gay movements and general closed-mindedness, The Jim Henson Company has decided to never work with the fast food chain again, and they will be donating their payment from their partnership to a decidedly less evil cause.  Here’s the statement they released:

The Jim Henson Company has celebrated and embraced diversity and inclusiveness for over fifty years and we have notified Chick-Fil-A that we do not wish to partner with them on any future endeavors.  Lisa Henson, our CEO is personally a strong supporter of gay marriage and has directed us to donate the payment we received from Chick-Fil-A to GLAAD.  (http://www.glaad.org/)

A great move by Henson, I think we can all agree.  You can still get your Creature Shop toys at Chick-fil-A for a few more weeks, but now that it’s been condemned by The Jim Henson Company, ToughPigs, and most of your peers, you might want to rethink that course of action.

Click here to stand up for what’s right on the ToughPigs forum!