The Not-So-Great Muppet Mural: The Artists

Hey, have you seen our latest ridiculous April Fools Day gag? We spoofed our own Great Muppet Mural with the Not-So-Great Muppet Mural: a massive art piece with a ton of obscure Muppet characters and stupid jokes mostly just added to made ourselves laugh.

Let’s take another look at it now, shall we?

As you can tell, a lot of work went into this thing. We had a small circle of ToughPigs contributors draw over 130 characters, and it’s a shame that it’s so hard to see some of them. In the spirit of giving these artists (and their work) the proper attention, we’re excited to share every individual Muppet illustration right here, right now.

First up, we have the background, seen above. Among the many, many references seen here are:

And now, over 130 characters illustrated for our ridiculous Not-So-Great Muppet Mural! Enjoy!

Kermit the Pig by Noah Ginex

Kermit the Protozoa and Fozzie Amoeba by Smig

Andy and Randy Pig by Smig

Beautiful Day Monster (from the “Got Anything Cheaper?” Muppet Show sketch) by Shane Keating

Billy the Bear by Shane Keating

Fozzie, Scooter, and Floyd as chickens (from the Roger Miller episode of The Muppet Show) by Noah Ginex

Cleo from Between the Lions by Zach Kenny

Cow (from “Jamboree”) by Zach Kenny

Dave the Human by Noah Ginex

Fred (from the Munchos commercials) by Smig

“And You Can Get a Free Watch!” by Zach Kenny

Gary Cahuenga and Chuckie by Smig

Grover (from the infamous “Big Boy” comic) by Shane Keating

Horatio and Bozark by Zach Kenny

Jen and Kira by Matthew Soberman

Jim Henson tattoo by (and on) Jarrod Fairclough

Joe and Ryan by Smig

Kermit the Forg by Shane Keating

Leo the Party Monster by Smig

Lothar from The Great Santa Claus Switch by Smig

Luna and the Swinetreck by Kenny Durkin

The Mighty Favog by Zach Kenny

Morton the Elephant-Bird by Zach Kenny

The Ghosts of Christmas Past, Present, and Yet to Come by Zach Kenny

The Newsman, Sally Spingel-Spungle-Sporn, and Gretel the Cow by Zach Kenny

Rowlf the Dog as a Gobagoo from “Sing-Along, Dance-Along, Do-Along” by Ryan Roe

Sammy the Snake by Smig

Snuffy (in his original, terrifying appearance) by Noah Ginex

The Southern Colonel by Smig

Ted Bedderhead from The Country Bears by Zach Kenny

Tennessee O’Neal from The Country Bears by Zach Kenny

The Thought Lion from The Jim Henson Hour by Zach Kenny

Velvet and Penelope Penguin by Smig

Wayne and Wanda by Shane Keating

Wild Impresario from The Ghost of Faffner Hall by Smig

Wild Impresario from The Ghost of Faffner Hall by Zach Kenny

Yertle the Turtle by Zach Kenny

Many, many thanks to the talented artists who helped us put this amazing and silly art piece together! We hope you all enjoyed seeing your favorite and less-than-favorite characters represented as much as we enjoyed drawing them!

Click here to break out the crayons on the ToughPigs forum! 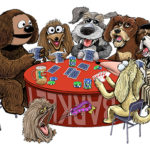 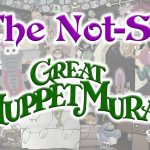 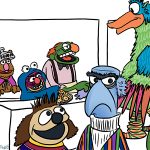