If you stopped by ToughPigs yesterday, you probably saw our big announcement for the sequel to last year’s incredible fan-made Muppet monstrosity The Great Muppet Mural. And hopefully you picked out the fact that it was (deliberately) very, very bad.

Of course, the whole thing was just a fun gag for April Fools Day. And in true egotistical fashion, we decided to spoof ourselves! It’s okay, we deserved it.

What we created, we hope, is a “Where’s Waldo”-esque scavenger hunt of ridiculous gags, jokes and references. Among the things you could search for are:

Many thanks to everyone who contributed to this silly piece of art, especially Zach Kenny who created the background and placed all of the characters. Also to Jarrod Fairclough who edited together the spoof of The Making of the Great Muppet Mural documentary.

And of course, apologies to the dozens of artists who we didn’t reach out to to be a part of this one. As you can imagine, it was important to us that we keep the number of participants small, as to keep the joke secret. But don’t worry, you probably dodged a bullet with this one.

Stay tuned as we reveal all of the individual artwork here on ToughPigs later this week. But for now, check out the mural and the documentary below, along with our original announcement in full! Happy April 2nd, Muppet fans!

Just a few months ago, we at ToughPigs teamed up with over 70 of our favorite artists to bring to you The Great Muppet Mural. It was so great, it broke the dang internet. Hundreds of characters in dozens of different styles, and all created by the fans for no other reason than because we love the Muppets and the creations of Jim Henson.

Heck, we love that thing so much, let’s look at it again:

The Great Muppet Mural was, as you can imagine, a huge hit. And as we’ve learned from The Muppet Movie or Pirates of the Caribbean, when you have a hit, you make a sequel. It’s the law of nature!

So a few weeks ago, we set things in motion to create yet another Great Muppet Mural. A greater one, perhaps? Yes, it is unarguably a more massive feat, as we’ve illustrated another army of Muppets just for your enjoyment.

Now without further ado, we at ToughPigs are extremely proud to present The Great Muppet Mural II! We encourage you to click the image below so you can see it in all its glory.

And that’s not all! We had such a good(?) time putting this mural together, we wanted to document the effort. ToughPigs’ own Jarrod Fairclough spent the last year-and-a-half painstakingly filming and editing a documentary about The Making of The Great Muppet Mural II. We are regretfully proud to share chapter one (of 27) with you now:

Okay, yeah, you probably have a few questions. There are a few tiny details we may have overlooked in creating a second mural so quickly. The fact that all the popular characters were used in the first mural, the fact that most of our “artists” have minimal artistic experience, all those Chips…

Look, nobody said it would be perfect. But don’t worry, we’ll be delivering the full explanation in a day or so, so stay tuned…

Click here to get completely lost in the beauty of the ToughPigs forum! 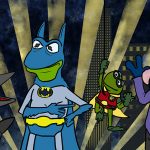 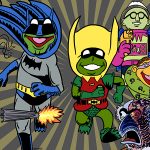