The following Q&As were conducted by Sarah Grace. Thanks for your help, Sarah!

Now that it’s been a couple thousand years since Fraggle Rock left our television sets, it’s great to finally have new Fraggle stuff coming our way every so often from Archaia Comics. And lucky for us, they’ve got some great talent keeping us entertained and keeping the magic alive.

Continuing our grand tradition of chatting with the writers and artists, we’ll be spotlighting some of the folks who worked on the first issue of the second volume of Fraggle comics (read our review here!), starting with artists Chris Lie and Cory Godbey! 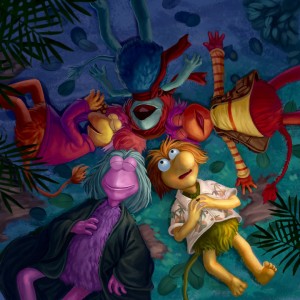 Chris Lie provided the cover seen here, as well as the artwork for the issue’s main story, “Wembley and the Great Dream-Capade!”, written by Grace Randolph!

Chris Lie: I first watched it on TV when I was a kid, and since then I have loved all of Jim Henson’s properties. I’m collecting the DVDs now.

CL: My editor, Tim Beedle, sent me bunch of reference, including screenshots. I also tried to find everything I could on the subject, both in pictures and clips.

CL: Tim Beedle, the editor of the Fraggle Rock comic series, was my editor at Tokyopop on Return to Labyrinth graphic novels. It’s great to work with him again. 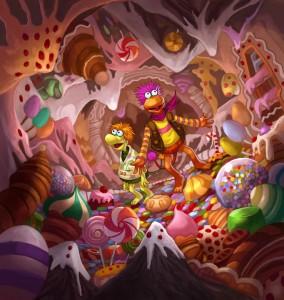 TP: This isn?¢‚Ç¨‚Ñ¢t your first foray into a Henson-owned universe, as you illustrated the Return to Labyrinth comic books. How would you compare the two experiences?

CL: They’re different. I grew up watching Labyrinth almost a hundred times, so I’m more familiar with it. Fraggle Rock wasn’t really exposed in my country as much as the Muppet Show. They are also very different in terms of the production processes. While Return to Labyrinth is in manga black-and-white format with a total of almost 800 pages in four volumes, The Fraggle Rock story that I did is only 20 pages and the final artworks are fully painted. Working on this Fraggle Rock story was so refreshing, fun and had given me chances to explore a new style.

CL: I like Boober a lot. Hmm…no least favorite I guess.

CL: I think they love it…hahahaha…because that’s what I heard from them 🙂

CL: The reader will have a chance to go to many different places, not just in the Fraggle Cave.

TP: You illustrated Barack Obama in an issue of ?¢‚Ç¨?ìDrafted?¢‚Ç¨¬ù in 2009. How do you think Obama would manage down in Fraggle Rock?

CL: I think he’d still be the President in Fraggle Rock, although the problems he’d be facing would be totally different 🙂

CL: They can visit my studio’s website at www.caravanstudio.com. We produce artwork and design for comics, cards, video games and toys.

CL: Please support the book so the series will last long! 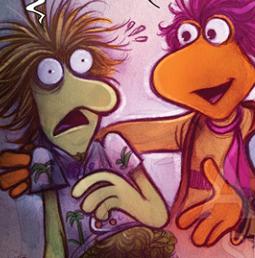 Cory Godbey provided the artwork for the issue’s third story, “Brave Sir Wembley”, which was written by Joe LeFavi.

Cory Godbey: I pretty much grew up on three things: Nintendo, ThunderCats, and Sesame Street. I love Henson and especially the Muppets but I?¢‚Ç¨‚Ñ¢ll be honest, somehow (and to this day I do not know how) I completely missed Fraggle Rock. I?¢‚Ç¨‚Ñ¢m relatively new to the world and I?¢‚Ç¨‚Ñ¢m sorry it took me so long to discover it. After working on my sample character art for Henson I sat there and thought, ?¢‚Ç¨?ìI think I might have been born to draw Fraggles.?¢‚Ç¨¬ù I love the way they look, I love the hair and tails. It felt right up my alley, visually. A wonderful combination of a lot of the thingsI like to draw.

CG: Even though I felt pretty well-versed in most things Henson (Muppets, Dark Crystal), I was new to Fraggle Rock so I read as much as I could find about the characters and watched several episodes from the first season. And like I mentioned before, I had to do several pieces of character art to be approved by Henson.

CG: I was contacted by Tim Beedle, the editor of the Fraggle comics. Also, I met Joe LeFavi, whose story I got to illustrate, at the San Diego Comic-Con year before last.

TP: According to your website, you love drawing monsters. How did you choose when to illustrate your own creatures and when to bring in any of the pre-existing Fraggle Rock species in your story?

CG: It?¢‚Ç¨‚Ñ¢s true, I love drawing monsters. For the most part, though I worked only with Fraggles. I did put in one tiny Doozer in the background of the first panel but it?¢‚Ç¨‚Ñ¢s so small probably no one would notice. Mokey?¢‚Ç¨‚Ñ¢s looking at it. There is a cyclops in my story (it?¢‚Ç¨‚Ñ¢ll all make sense when you read it!) Wembley is imagining something worse than a ?¢‚Ç¨?ìSilly Creature?¢‚Ç¨¬ù and so to illustrate it I thought, ok a cyclops, that?¢‚Ç¨‚Ñ¢s like a person turned into a monster. I did it but it didn?¢‚Ç¨‚Ñ¢t look Henson enough so I figured in all the history of the Muppets there must be a cyclops somewhere. Sure enough I found one in an old Grover story. It?¢‚Ç¨‚Ñ¢s basically a huge, one-eyed, deranged Elmo.

CG: I love Mokey?¢‚Ç¨‚Ñ¢s personality. She?¢‚Ç¨‚Ñ¢s sweet. I also love drawing Boober so it was a plus that he was prominent in the story. I don?¢‚Ç¨‚Ñ¢t think I could pick a least favorite.

CG: It took me a little bit to get a handle on Wembley, he looks a little different I guess, or something. Gobo came pretty naturally I think, as did Boober but Wembley took me a little longer. They all were fun to draw, I love the fuzziness.

CG: This is the part I was most pleased with ?¢‚Ç¨‚Äú as I understand it from the editor, my illustrations were not just approved but ?¢‚Ç¨?ìenthusiastically approved?¢‚Ç¨¬ù and that my work was some of their favorite Fraggle Rock pages yet. I was so excited to be able to contribute to the Henson legacy even in this small way that I still can?¢‚Ç¨‚Ñ¢t really put it into words. It was a perfect project.

CG: Caves. And a pair of mind-controlling Cyclopes (is it Cyclopes? Cyclopi, Cyclopodes?) Also, a phone.

TP: To what lengths would you get a postcard from your Uncle Traveling Matt?

CG: Sorry, if I lived in a little nook in a Fraggle cave I would never leave. That place is awesome.

CG: Keep dancing those cares away.

Many thanks to Chris Lie and Cory Godbey for agreeing to chat with us and for all their great Fraggle Rock artwork!!

Click here to avoid the Cyclopian monster on the ToughPigs forum!