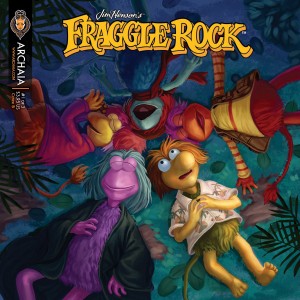 Waaay back in the year 2010, Archaia Comics published a three-issue limited series of Fraggle Rock comics. They were good enough to leave us wanting more, and this Wednesday our wait is over, as issue 1 of a second three-issue volume arrives in comic book stores.

The issue starts out strong, with “Wembley and the Great Dream-Capade,” written by Grace Randolph and featuring art credited to Caravan Studios with pencils & inks by Chris Lie. In interviews, Randolph has been teasing this story as “Fraggles meet Inception,” and that is not because Michael Caine plays Wembley’s father-in-law. It was established on the Fraggle TV show that Fraggles can share their dreams, and in this story that becomes a necessity for Wembley when he suddenly finds himself unable to dream at all. His Fraggle pals offer to let him share their dreams, so he does, visiting each of their subconsciousnesses one by one in the hopes of getting a good night’s sleep. I don’t want to give anything away because I abhor spoilers, but each character’s dream feels perfectly in character, especially Red’s.

Like many good episodes of the show, this story does involve Wembley learning something about himself, although it’s not exactly a universal life lesson. But that’s okay, because this is an entertaining Fraggle story. The art is fine, with some really good facial expressions on Wembley — and he even gets eyelids in a few panels without looking too weird.

Next up is “Boober and the Ghastly Stain,” written by Jake T. Forbes with art by Mark Simmons. The premise is simple: How far will Boober go to properly launder Gobo’s soiled shirt? It’s short, but it contains a musical number — always welcome in a Muppet-based comic — and the art features the best likenesses of the characters of all the stories in this issue.

The final story is “Brave Sir Wembley” by Joe LeFavi, with art by Cory Godbey. Like the dream story, it includes a nod to Fraggle continuity from the TV show… As the story opens, the Fraggles are preparing for the Glory Song celebration, as seen in that episode with the Ditzies. Gobo is supposed to go to Outer Space to pick up a special postcard his Uncle Traveling Matt wrote to the Storyteller to mark the occasion, but he’s busy with party responsibilities, so he asks Wembley to make the trip for him. Wembley has no problem with this… until Boober starts speculating about all the terrible things that could happen on the way. 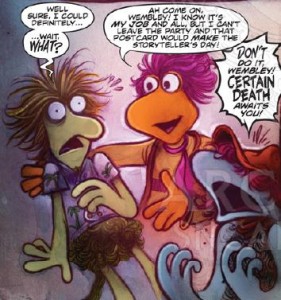 LeFavi really nails Boober’s voice in this story, and while I expressed reservations in an earlier review about the notion of anyone but Gobo venturing into Outer Space, I have no problems with the way this story is resolved. I think this is also the first Fraggle comic story that made me laugh out loud. Godbey’s art is looser and more off-model than the other artists, but it fits the tone of this story.

Then there are activity pages by Katie Cook, and if you’re familiar with her work you don’t need me to tell you that they’re nifty and adorable.

Maybe it’s the novelty of having a new Fraggle comic after the months without any talking, but I think this is my favorite issue yet. All the stories are good, the Fraggles consistently feel like the Fraggles, and the whole thing has the vibe of having been created for fans, by fans. Now, how about a sequel to the dream story? I’d love to know what the World’s Oldest Fraggle dreams about… 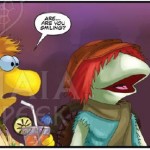 Click here to dance your cares away, volume two on the Tough Pigs forum!