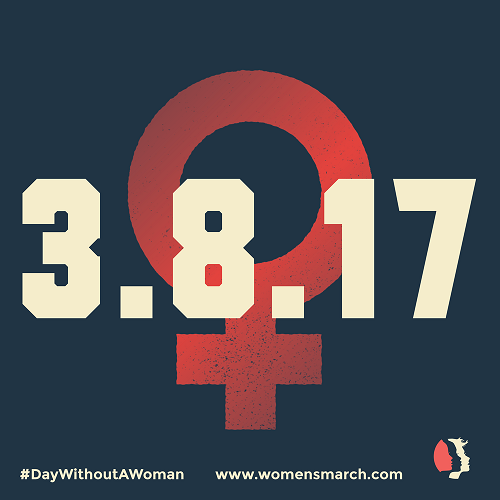 Today, across the country (at least for our US readers!), women are staying home from work. Much like with the Women’s Marches in January, women are taking a stand against a government that seeks to set them back a couple of decades. Some of us, like yours truly, can’t take the day off work because money (blah), but we’re showing solidarity in other ways.

A Day Without A Woman, as the protest today is being called, is to show the power, necessity, and importance of women. It’s no mistake that this protest is happening on International Women’s Day – it’s intended to raise awareness about civil liberties, reproductive rights, violence towards women, and, the big reason behind this strike, economic inequality. On top of being expected to do more emotional labor and clean up around the house, women are a huge asset to the work force and are still, to this day, underpaid in comparison to men.

Speaking of women in the work force! One can’t help but think of the Sesame Street song “Women Can Be”!

This song was released all the way back in 1974 during season nine, and there’s a lot to love about it and a little to critique.

Obviously, the message behind this song is wonderful. It’s very straightforward; you can’t get more direct than the lyric: “There’s nothing we women can’t be.” I think we can all get behind that, right?

The only known Muppet in the chorus is Betty Lou.  Otherwise the rest are various Whatnots (though two are addressed as Margaret and Teresa). The chorus members all have various aspirations – with a showcase on the lion tamer, the surgeon, and the rocket scientist – and at the end come out wearing hats of many of the professions they’ve sung about. 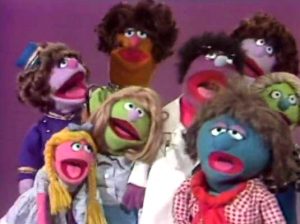 Ignoring the powerful message for a moment, the song is a delightful sounding one. “Women Can Be” was written by Carol Hall and Sam Pottle, two consistent contributors to Sesame’s music. Pottle was also the musical director from season six to nine.

The beauty of this song is that it’s not just directed towards young women, but children of all genders (or non-genders). That said, this is an incredibly important song for girls. It’s a song that tells them, “Hey! Be a surgeon! Be an alligator hunter! Be a roller skater! You can do it!” This is such a vital message, considering this song was released in the 70’s, but even to this day it’s still important. It’s also a significant message for young boys: to not pigeonhole those of the opposite gender and assume they’d only be interested in stereotypically feminine careers.

The critique I have on this song has a bit to do with the ToughPigs article from yesterday; how there have always been wonderful women collaborators in the Muppet franchise but, at the end of the day, it’s a boys’ club. It’s amazing that, for being so early in Sesame’s run, all of the vocals in this song are actually performed by women. The chorus is made up of Marilyn Sokol (Ma Otter from Emmet Otter), Carol Hall (the song’s co-writer), Jane Henson, and – believe it or not! – Rita Moreno. There’s eight puppets in the chorus, so we know that these ladies took on multiple characters. 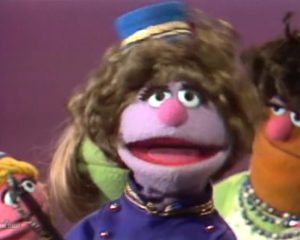 Now, while it’s awesome to see a song about women actually being sung by women in the early Muppet years, what’s a bit of a bummer is when you consider that the puppets are being performed (at least mostly) by men. I wouldn’t be surprised to find out that Jim, Jerry, Frank, and/or Richard are down below the frame. The shame of it is that, in season nine, there were two female puppteers in the cast: Fran Brill and Caroly Wilcox. Perhaps one or both of them got to perform some of the puppets in this number, but neither of these ladies provided voices for “Women Can Be.”

The bright side: progress is a thing! “Women Can Be” brings to mind two other Sesame Street songs from recent years.

The first is “Girls of the World,” which features Rosita, Betty Lou, Prairie Dawn, and Zoe singing about all the things girls are capable of doing, showing contrasting ideals and interests. Some hobbies are “feminine” and others “masculine”, explaining to children that, at the end of the day, gender norms and stereotypes aren’t real. And all four characters are performed by women – both in physicality and voice!

“Change the World”, performed by Segi (best known for “I Love My Hair”), is basically the same concept of “Women Can Be” but a bit updated. Segi sings about wanting to grow up to be a doctor, a judge, an astronaut, and even the president in hopes of making the world a better place. As she sings: “I can be anything.”

In the end, it’s nice to see that, despite the underwhelming number of women on staff, Sesame has always had women’s backs. Women truly can be anything, and maybe that’s a reason to protest today. Strike for the young girls of the world, that they might get to grow up to be whatever they want to be because we stood up and said “no.”

Hopefully a few grow up to be alligator hunters. 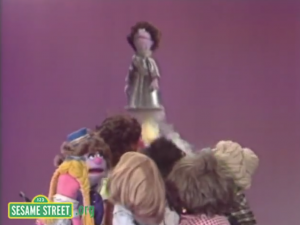 Click here to discuss all the things women can be on the ToughPigs forum!