Jim Henson died on May 16, 1990.  It was a shock, and as seen in the Life magazine feature published just weeks later, everyone from the public to Jim’s colleagues at the company bearing his name were left wondering about the future.  What would happen to the Muppets?  Six months later, on November 21, an answer to that question came in the form of The Muppets Celebrate Jim Henson, a one-hour network special written by Jerry Juhl, Bill Prady, and Sara Lukinson, directed by Don Mischer, and featuring Jim’s creations honoring the man that started it all.

It would have been easy to fill the hour with a current popular television personality talking to the camera and introducing clips of Jim’s work. But since when have the Muppets ever done things the easy way?  Instead, the special not only brings us a tribute to Jim Henson, but also the story of the Muppets struggling to produce a tribute to Jim Henson, which is about as Muppety a premise as I can imagine.

The show takes place in a version of the Muppet Theater backstage area, with a bank of wall-mounted monitors serving as a nod to The Jim Henson Hour. With Kermit on vacation, Fozzie uneasily takes a leadership role, as he and Scooter and the gang try their best to follow Kermit’s instructions for the big Jim Henson production number.  There’s only one problem: None of the Muppets have any idea who Jim Henson is. (Please ignore the fact that they previously performed a musical number about him at the Television Academy Hall of Fame.) 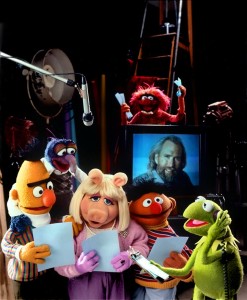 Fortunately, the gang finds clues about this Jim Henson fellow’s identity throughout the show.  Robin vaguely remembers that he was one of those guys “down there” who follows the Muppets around everywhere they go.  Clifford finds a reel of film on Kermit’s desk containing footage of Jim’s early life and work — a sequence which provided many Henson fans with their first glimpse of Time Piece. Rizzo stumbles upon one of Gonzo’s old paychecks signed by Jim, leading them to suspect that he was an accountant and inspiring them to hire the Merrill Lunch Hungerdunger McCormack All Accountant Marching Society.

And throughout the show, celebrities spontaneously appear on the monitors to talk about different aspects of Jim Henson’s career and set up a montage of relevant clips.  Carol Burnett talks about the richness of the Muppet Show characters, Harry Belafonte shares his experience with seeing the lives of children all over the world enhanced by Jim’s work, and John Denver explains how the Muppets can use their sincerity and irreverence to convey real information (which prompts Rizzo to reveal to the viewer that Denver’s real name is John Deutschendorf, Jr).  One does wonder why the Muppets don’t just ask the folks on the monitors for the necessary additional details about Jim, but I guess that would have made the show a lot shorter.

The premise is the perfect way to pay tribute to Jim while demonstrating the scope of his work and the breadth of his imagination.  We learn about Jim at the same time as the characters do, while the clips and the new backstage scenes add entertainment value to the proceedings.  Which is great, because Jim Henson’s Muppets are all about entertainment.  In fact, this special would be a great way to introduce a budding Muppet fan to Jim Henson, the creator and the man.  It demonstrates just how impressive the guy was, and makes you want to run out and watch everything he ever made. 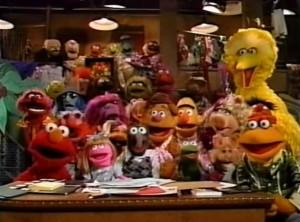 Inevitably, the Muppets learn the sad truth.  When they read a pile of real letters from fans, the knowledge that Jim has passed away hits them so hard that Fozzie is ready to cancel the show, until Robin encourages him to keep going, in the spirit of Kermit and Jim.  There’s a reason this sequence, which leads to a big group performance of “Just One Person,” provokes comments about “the feels” and cutting onions every time it’s posted anywhere on the internet.  It’s genuinely heartbreaking, and it’s clear that it’s not only the characters who are mourning their loss, but the performers as well.

And yet “Just One Person” is ultimately an optimistic song, about friends helping each other persevere in the face of uncertainty.  I can’t think of a more appropriate choice for this moment.  Kermit approves too, praising his pals on a job well done after slipping in unnoticed during the song.  Steve Whitmire hasn’t quite perfected his Kermit yet in this early appearance, but the frog’s brief cameo is just enough to make us glad to see him without being too jarring. 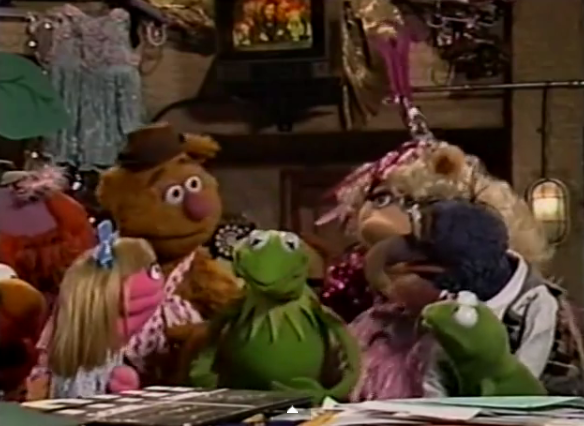 So, back to the question: What will happen to the Muppets?  The Muppets Celebrate Jim Henson provides the answer: They’ll keep going, singing and dancing and being silly, moving forward while never forgetting where they came from.  Jim’s trusted collaborators — the performers, the writers, the producers, the puppet builders, and lots of other people — worked together to make the special a fitting celebration, and the same team would continue bringing Muppet stuff to the world in the years following.

Gradually, new performers and creators would join the Muppet family, working alongside those who had worked alongside Jim.  Today, many of the originals have moved on, retired or passed on, but that lineage remains, remarkably so for a franchise now owned by a huge corporation.  Now we’re eagerly anticipating a promising new Muppet TV series, produced by one of the writers of this special and starring the current talented troupe of Muppet performers. The Muppet family lives on, just as the Muppets live on, because, as Kermit says at the end of this special, that’s the way the boss would have wanted it. Yaaaaay.

The Muppets Celebrate Jim Henson has never been commercially released, but you can watch it on YouTube.  Click here to sing and dance and be silly on the Tough Pigs forum!