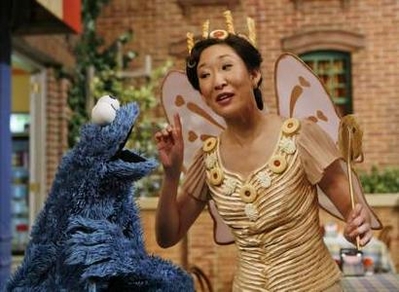 If you’ve been reading Tough Pigs for at least four of the approximately 3,650 days it’s been in existence, you probably saw “What Were We Talking About?“, the Tough Pigs review-quote matching game I posted on Monday.  It was such a smash hit I’ve compiled a sequel.  Actually, I don’t know if it was a smash hit, but I had fun with it, and there are a lot more TP reviews to draw from, so here we go again.

In case you missed Monday’s article, it’s quite simple — so simple a monkey could do it, provided that monkey was familiar with the Muppets’ oeuvre.  Below, you’ll find eighteen quotes excerpted from various reviews spanning Tough Pigs’ ten-year history, and a “word bank” containing the titles of twenty Muppety projects that we’ve reviewed.  Can you match each quote to the review it came from?

Every project corresponds to just one quote and vice versa; there should be no leftovers when you’re finished.   If it helps, maybe you’ll want to print out a copy of the whole thing so you can cross things off the list as you go.  Then tear it up into confetti and use it to practice your Rip Taylor impression.  Just to shake things up (I’m such a crazy guy!), I’ve included several reviews of reissues and older productions this time around.

1. “So what did we learn from this DVD? Magic is not something to mess around with. So I hope all the kids at home who were planning on experimenting with dark forces are paying close attention! We also learned that Chris looks delicious as a cookie (but not as delicious as Sandra Oh in her cookified dress… rawr!).”

2. “But should you watch it? Well, that depends… Do you find the following things funny: Puppets in bondage gear, 13-year-old children drinking beer, jokes about pigs having intimate relations with midgets? If so, this is the show for you.”

3. “It is short, but the flip side is that there’s no boring parts. We don’t get tragic stories of childhood poverty, battles with substance abuse, mystical revelations that all people are one — or whatever else fills up those huge biographies that people buy and never read. Practically all the stories in the book relate directly to Sesame Street and Caroll’s career with puppets, so it’s just one little gem after another.”

4. “References to Bert’s paperclips, Ernie counting fire engines, and monsters that go ‘wubba wubba’ showed that attention was certainly paid to Sesame Street’s lauded 40-year history (save for one mildly baffling line where Bert tells Ernie to ‘put the duckie down’ — wouldn’t it have been easy to switch around the words and pay homage to one of the biggest Sesame Street hits of the 80’s? But I digress.).”

5. “You should probably carry the DVD around with you in case anyone ever asks you, ‘Hey, could give me an account of the Muppets’ rise to international fame in one hour or less??’ Oh, and make sure you also carry a DVD player, so you can show it. Oh, and a TV. Also a really long extension cord.”

6. “I’m planning to show this DVD to my non-Muppet-fan friends (and yes, I have some), to demonstrate why I love the Muppets so much. There’s a short list of Muppet/Sesame projects that you can show to a non-fan without having to apologize for something, or fast-forward past a slow bit. This… DVD is on that list for sure.”

7. “A four-year-old who hears Elmo saying it’s cool to pick up trash is probably not going to run out and adopt a highway. But it couldn’t hurt to plant the seed, much like those Turkish kids planted those trees. And maybe in time, as that seed matures, the kids who watch this video over and over will grow into responsible adult trees who try to reduce their carbon emissions instead of douchebag trees who throw empty bottles out the windows of their tree cars.”

8. “The characters are pretty close likenesses of the puppet, but they’re loose and cartoony enough that their expressions really sing. When Large Marvin licks the floor of the cave, his look of sheer desperation is one the puppet could never make, which makes the sight gag even funnier.”

9. “But after maybe two seconds of trying to imagine people inside the costumes, you’ll forget about the science of filmmaking and fall backwards and upside-down into movie magic. The puppetry was flawless and natural, while the CGI was used lightly enough to be hardly noticeable.”

11. ”In this case, a full booklet is included, featuring a brief synopsis of each song (which is important if you don’t know what ‘Ohgneyat Al Lo’ba Al Sha’beyya’ means) and translations into Spanish, French, and German. The notes are cute and informative, and now I’ve figured out how to say ‘Mr. Noodle’ in four languages!”

12. “So there’s your travel lesson, kids: Run away from your tour group, as fast as your legs can carry you! The tour guide means you ill! Fall in with anonymous locals, and uncover their secret agendas! Spend the night crashing in strangers’ beds! That’s your key to a satisfying travel experience.”

13. “The only real duds on the Volume 2 disc are ‘True Mud,’ which just doesn’t make much sense, and ‘The O Show,’ but that one is mostly due to Oprah Winfrey’s listless performance as the titular vowel.”

14. ”Although there’s more raw information in those first 150 pages than you can shake a stick at (assuming you’re one for stick-shaking), there isn’t much about Sesame Street or the Muppets. And let’s face it, you’re probably on this site in the first place because you’re a Muppet fan. Or because you’re my dad (Hi, Dad!).”

15. ““The Count joins with a version of The Countess played by Fran Brill for “Let It Snow.” I realized while listening to it that the Count is one of the few Sesame Muppets who can pull off a genuinely romantic song. When he says “The lights are turned way down low,” you know exactly what he means. (Okay, he partially means that it’s easier to count snowflakes with the lights off, but still.)”

16. ”Now, as an uneducated Jewish boy, I was admittedly a little hesitant in buying this album. I can count the number of Christmas-related albums I’ve bought on one finger (that’d be Muppet Christmas Carol, for those of you keeping score). Growing up, we felt like we heard the same three Christmas songs over and over, and somehow we still never learned the words to them (seriously, a verse about figgy pudding? You’re making that up…)”

And now, as promised, the word bank:

Did you match them all?  Are you ready for the answers?  Here they are!

Click here to  fall backwards and upside-down into the Tough Pigs forum!