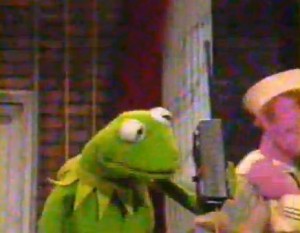 In 1988, the View-Master people introduced a cool new toy called the Interactive Vision, which allowed the user to watch special VHS tapes and press buttons to affect the outcome.  Sort of like a Choose Your Own Adventure book.  I’ve read the description of the thing on Wikipedia three times, and I still don’t understand it completely.

One of the titles released for the system was Muppet Studios: You’re the Director, in which the user gets to boss the Muppets around and tell them how to make their latest movie.  And guess what?  Somebody put the whole thing on YouTube! Of course, because it’s just a recording, you don’t actually get to affect what’s happening as if you were actually playing the game. You’re basically watching someone else play.  But still, it’s lots of material with Kermit, Gonzo, Janice, the Swedish Chef, Link, Dr. Strangepork, Rowlf, et al that you’ve probably never seen before. Check it out:

Thanks to Tough Pigs’ own Anthony Strand and The AV Club’s Erik Adams for the alert!  Press the red button to wear a pizza on your head on the Tough Pigs forum!  And if anyone understands how this magical technology worked, please let me know!

Watch This: In Today’s Toyota Video, Kermit and Pepe Meet the Fans