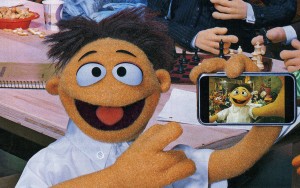 Well, here he is. That guy over there is Walter, the new Muppet character who will be featured in the new Muppet movie, which is now filming and which will be in theaters in just 415 days. That gives us plenty of time to buzz with anticipation, and to speculate and complain and laugh and cry and spin around in circles and get dizzy and fall down.

Walter can be seen, along with the rest of the Muppets and the movie’s co-writer Jason Segel, in a two-page “First Look” photo spread in the brand-new issue of Entertainment Weekly (the one with Harry Potter making a tough-guy face on the cover). You can click here to see the whole thing. There’s not really a full-fledged article to go along with it, but there is some accompanying text with quotes from Segel and director James Bobin. So what can we glean from this?

And now I think I think I’ve written about as much commentary as can be written about one photograph. But it’s exciting to see Kermit and Piggy and Fozzie and those guys getting hype in a major publication, isn’t it? My cautious optimism is burning pretty brightly right about now. How’s yours?

Click here to express cautious optimism or reckless pessimism (your choice!) on the Tough Pigs forum!