Pretty much everywhere we go, we’re on the lookout for some sort of Muppet presence, whether it’s as obvious as a Muppet performer making a rare appearance or as subtle as a hidden reference to something seen in the background of that one episode of Dinosaurs.  So when the worlds of comic books, sci-fi, anime, video games, uber-fandom, general geekiness, and all things pop culture collide, we expect a good amount of Muppet content to satisfy our needs.

Usually, New York Comic Con has a few of those Muppet tidbits, but most years the pickings are relegated to fan art and the occasional cosplayer.  But this year, everything changed.  Dare I say it, the 2013 NYCC was the Muppetiest one yet.

Lucky for you, your pals from ToughPigs were in attendance for all four days of Comic Con, and we got the scoop on everything you may have missed. 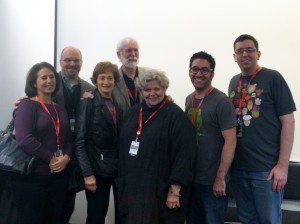 The biggest event by far was the Jim Henson: The Biography panel, moderated by two guys you may have heard of from some website you may be reading right now.  Panelists included author Brian Jay Jones, Jim Henson Legacy Executive Director (and Miss Piggy designer) Bonnie Erickson, Jim Henson Company Archivist Karen Falk, and Muppeteer Fran Brill.  But that’s not all!  We had two more surprise panelists: Longtime Muppet designer Michael Frith and Sesame Street’s own Prairie Dawn!  Our panelists told a packed room all about the early days with Jim, some of their favorite Muppet productions, and the things they were surprised to see in the new biography.  I’d tell you more, but you may as well watch it for yourself, which you’ll hopefully be able to do soon.  We’re pleased as punch to announce that our panel was videotaped by none other than The Nerdist Channel!  Once they finish editing and posting the video, we’ll share it here for your viewing pleasure. 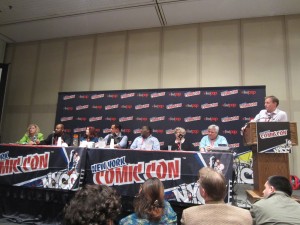 You want to hear about more than just the ToughPigs panel?  I guess there were other panels too.  On Thursday, we attended the “Creatively Energizing Your Students with Comic Books and the Arts” panel, moderated by ToughPigs friend Mike Lopez, and including such panelists as Bonnie Erickson, Noel MacNeal, Louis Henry Mitchell, and Leslie Carrara.  The panel began talking about how the arts can benefit teachers and students, but evolved into inspirational conversations about how it’s okay to be different (and often, it’s a blessing), how the arts are a portal for self esteem, and how the first person in “Just One Person” can often be a teacher.  Noel MacNeal also shared a fun story about this Sesame Street sketch, which had to be re-shot after they wrapped because the Research department didn’t want the audience to see Monsters as the “working class”, since all of the airplane passengers were humanoid and Grover was the only Monster.  As you can see, another blue Monster was added behind Fat Blue to remove any potential prejudices. 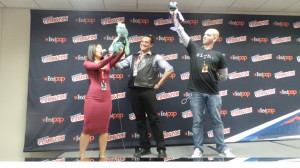 On Friday, Noel MacNeal held a puppeteering workshop, showing off the many ways one can build and perform puppets, ranging from simply putting eyes on a bare hand (as demonstrated by a Bear hand), to sock puppets, all the way to professionally built ones. He also demonstrated the difference between a hand-rod puppet and a live hand, which led to some hilarity when MacNeal dragged his partner around the stage in a desperate attempt to keep up. He also invited audience members (including ToughPigs’ own Matthew Soberman) to try their hand at puppeteering. The workshop’s grand finale came as MacNeal led audience members in puppeteering through a verse of “Sing After Me.” 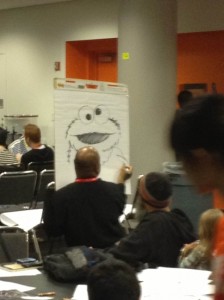 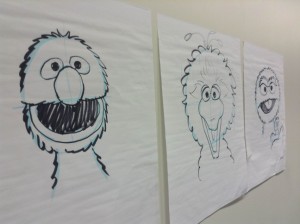 Sesame Street artist Louis Henry Mitchell held a drawing workshop for kids, where he reportedly brought out real photo puppets of Ernie and Grover! Attendees got to watch Louis as he drew a circle or a lined grid and somehow ended up with a perfect picture of Big Bird or Cookie Monster or whoever. At one point, a kid asked Mitchell to draw Slimey. Mitchell responded that no one had ever asked him to draw Slimey before, but when he drew Oscar he added Slimey sitting in the palm of Oscar’s hand.  I could probably handle drawing a decent Slimey, but nobody requests that from me either. 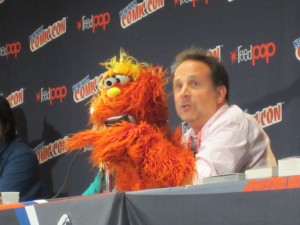 The “Comics for Everybody” panel, which was sponsored by Sesame Workshop, had ToughPigs friend and Muppet comics cover artist (although he’s much more famous for his own comic Mouse Guard) David Petersen, as well as Sesame Street head writer Joey Mazzarino.  Despite the fact that Mazzarino doesn’t write for comic books, the panelists bonded over their careers in writing for all ages.  You know how Sesame Street is so great because it’s entertaining for both little kids and adults?  Turns out that’s the case for just about everything labeled as “all ages”.  Mazzarino compared Sesame to Mad Men (“but replace booze and sex with cookies and counting”), compared writing for young audiences with Jim Henson’s struggle to balance his career as a performer for kids shows and adult fare, and wished for Sesame Street to be translated into Targaryan.  The highlight was a special appearance by Murray Monster, who declared the Word on the Street to be “graphic novel” and denied that Super Grover is his favorite superhero (it’s actually “Y the Last Man”, which isn’t his name, nor is he a superhero, but I digress). 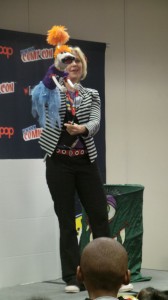 Leslie Carrara-Rudolph and her sock puppet pal Lolly Lardpop had one of the last workshops of the Con where they showed ways for kids to create characters using their voice, body, and a whole lot of imagination (of which Leslie has loads). Highlights included Leslie doing highlights from The Wizard of Oz (where she did a very convincing Judy Garland), an improvisational drawing demonstration, and showing how to build puppets from household items. Unfortunately, Leslie had to cut her show short, which was a testament to how imaginative and freeform this show was, and how engaged the audience was. 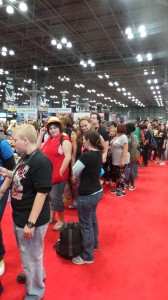 David Rudman made a rare public appearance, and the line to meet him (with a Cookie Monster photo puppet) was long, stretching across several aisles of the show floor.  (Seen above: A small portion of Rudman’s line.  People sure do love that Baby Bear!)  Rudman sat in front of a TV playing the “Pirates of the Caribbean” parody from this season’s “Crumby Pictures” segment.  Rudman was signing photos of Cookie Monster with his own autograph and Cookie’s — for free, no less! Compared to Sylvester Stallone selling his autograph for $395 elsewhere at the convention, that’s downright miraculous. 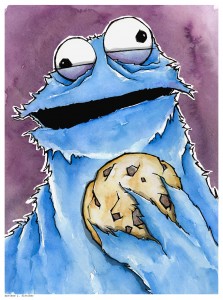 Artists Alley was a bit of a bust this year, Muppetly speaking.  While reliable Muppet artists like Amy Mebberson, Katie Cook, and James Silvani were all there and selling their amazing prints and original sketches, there wasn’t much elsewhere that we didn’t see last year.  However, we did see a few cool things, and we’ll hopefully be featuring them on ToughPigs at a later date.  So stay tuned, art lovers! 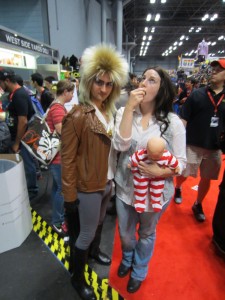 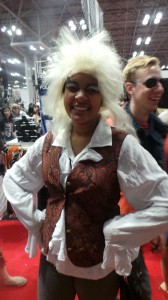 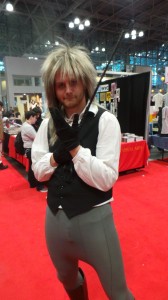 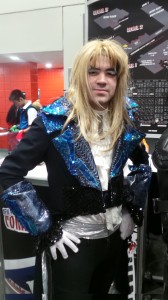 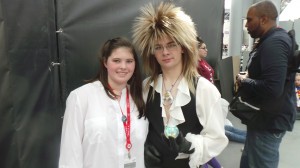 Cosplay was also a little weak this time around, with plenty of Jareths, but not much else from the Henson side of the world.  Come on, not one Dearth Nadir?  No Bert and Ernie/Mario and Luigi mashups?  Not a single Ghostbusting Grover?  I’m disappointed in you, People Who Make Costumes.  For shame. 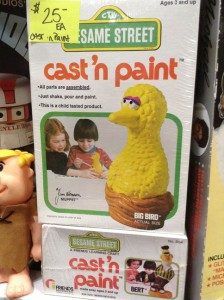 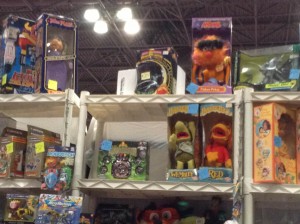 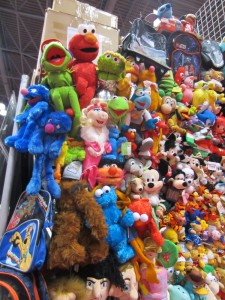 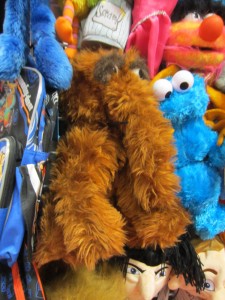 Lastly, there’s the merch.  It seemed like just about every vendor was selling the Funko Pop figures, as we predicted, but not much else from the past few years.  There was some cool vintage stuff though, including a paint-your-own Big Bird, some crazy expensive Fraggle dolls, and a dusty Mr. Snuffleupagus doll that I’m almost positive was also on display at the same booth last year.  (No, I swear! Just turn around right now and you’ll see him in last year’s article… Oh, you just missed him!)

And that’s all from this year’s New York Comic Con! Oh sure, there was probably some news about Spiders-Man or Buddy the Vampire Killer or Jimmy Olsen too, but we all know what’s really important.  Forget the superheroes, and let’s work on raising the Muppet presence at next year’s NYCC!

Click here to stand in line for the voice of Scooter on the ToughPigs forum!

by Joe Hennes – Joe@ToughPigs.com
with additional reporting by Ryan Roe and Matthew Soberman