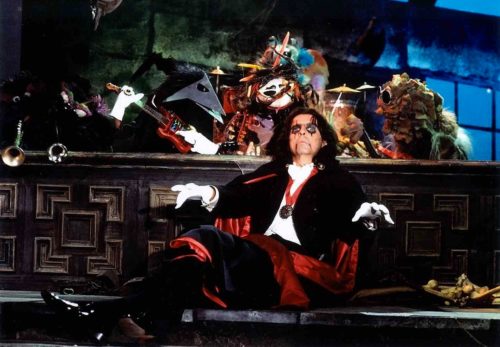 On paper, Alice Cooper and the Muppets don’t feel like a match. With concerts featuring the like of decapitated baby dolls and mock guillotine executions, it seemed unlikely that Cooper’s shock-rock and style would mesh with the family-friendly anarchy of Jim Henson. But when you scratch the surface, and see Cooper dress up in a white tie and tails to sing Rodgers and Hart (and then demolish the set), or lecture about the history of Milwaukee, you start to realize that Alice Cooper is the perfect guest star for The Muppet Show. He has a chemistry with the ensemble that few had over the course of the series. And the best part is, throughout the episode, he never compromises his style of spookiness. 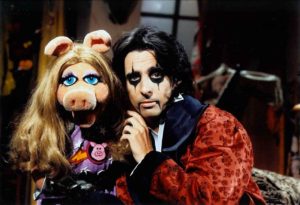 Of course, you can’t really talk about this episode without mentioning the backstage story of the episode. If you haven’t seen it before (and let’s be honest, it’s season three, so you don’t really have much of an excuse), Cooper reveals himself to be an “agent,” working on behalf of someone who can offer wealth, fame, and a dream career in exchange for someone’s soul. It’s a funny take on the Faust story that shows off some interesting aspects of a couple of beloved characters. Gonzo is desperate to take up the offer. Miss Piggy takes it for a test drive. In those moments, we see that running desire to be adored and appreciated that both characters have, yet it comes off differently for both. Gonzo works with reckless abandon in the name of art; he has no regard for his body, so why should it be different for his soul? Miss Piggy, on the other hand, will do anything to be the best (or in this case, the most beautiful), so the ends justify the means. In this case, she’s not a fan of the end product, so she calls off the deal. It’s a funny storyline with some interesting character work. 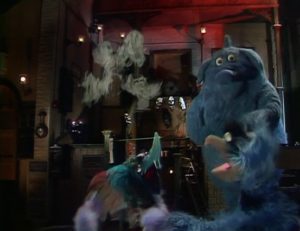 I also want to add that (unsurprisingly, given Cooper’s line of work), this is a very music-heavy episode, with five (including the UK spot) musical numbers, each showing off a different side of Cooper and the Muppets. Over the course of the episode get the eeriness of “Welcome to My Nightmare,” the sweetness and sentimentality of “Over the Rainbow,” the silliness of “Once a Year Day,” the passionate love ballad of “You and Me,” and the glam rock exuberance of “School’s Out.” Each of them is different, yet fits in well with the style of The Muppet Show. And yet, it also feels like we get a lot of sketch material as well. There’s a lot of fun with the background story, we get solid installments of “Pigs in Space” and “Muppet Labs,” and the “Toothache” sketch, which is creepy and funny all at the same time. Brian Henson, in his introductions to the episodes when they aired on the Odyssey Network and in the Time-Life Home Video releases, said that this episode had “a little bit of something in it for everyone.” He’s not wrong here. It really feels like they manage to throw everything and the kitchen sink into this episode. 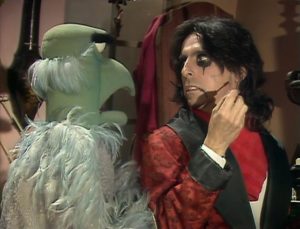 But getting back to Cooper, he seems to get what the Muppets do. He dances with a tape-edited ghost, does a kickline with Sweetums, Mean Mama, and Doglion, and serenades Beakie (who honestly looks like the love child of Fletcher Bird and the original Garibaldo). He laughs at the corny jokes, and isn’t afraid to make a few of them himself. He manages to exude both rock star coolness and vaudeville goofiness at the same time, which is remarkable. In my review of Vincent Price’s episode, I said that one of the best aspects of The Muppet Show was that it allowed guest stars to show off a different side of themselves. But the funny thing about Alice Cooper is that the blend of creepiness, borderline campy theatrics, punk rebellion, and silliness that we see in this episode is what the public saw. He just slightly changes the ratio to blend seamlessly into the cast. And in an episode with ghosts, monsters, and demonic pacts, that may be the most magical, punk rock thing of all.

Best Joke: I can’t decide, so I’ll give both. First, there’s Gonzo’s desperate plea for a pen to sign the Faustian contract: “I’d sell my soul for a pen! No, I have other plans for that.” And then there’s Cooper’s report to headquarters after Miss Piggy opts out of the deal: “Yeah, hello, boss? No, no, I didn’t make a sale. Uh, listen, do I get any commission on hourly rentals?”

Lamest Joke: William Tell: “You just can’t move when I’m shooting. I’ve told you that a thousand times.” Tell’s Son: “Well, you know me: in one ear and out the other.” It’s not that bad, it’s just that in an episode with so many winners, this one isn’t the strongest. But even the lame jokes are funny. 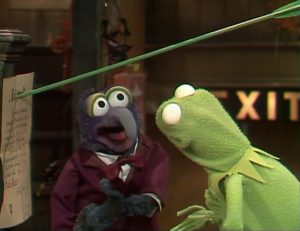 MVM (Most Valuable Muppet): With his desperate plea for a pen and his appearance as “the voice of doom” in the closing, Gonzo’s my pick for this week. He may not have sold his soul, but he did steal my heart.

Most Classic Moment: I guess it would have to be “School’s Out,” perhaps Cooper’s most famous song paired with a team of full-bodied Muppets as backup dancers/demolition experts. Plus, Thog’s carrying a sparkler. That’s just so darned cute!

Should-Be-Classic Moment: The “Toothache” sketch feels like it was pulled straight out of the Muppets’ early years in the best possible way. It’s subversive and experimental in its aesthetic, but still retains the Muppet sense of humor we all know and love.

First Appearance Of…: The Vile Bunch, whose members would pop up in the background (and occasionally the foreground) of future Muppet sketches starring monsters and extraterrestrials. But perhaps most importantly, this was the first Muppet Show episode that Muppet performer Steve Whitmire worked on. Whitmire rose through the ranks to perform Rizzo, Wembley Fraggle, and Bean Bunny, as well as Kermit the Frog following Jim Henson’s passing, but I’m sure you all knew that by now.

Coolest Puppetry Effect: Before “Once a Year Day” begins, Kermit blows out a candle and says “think about that, folks.” A small effect, sure, but still pretty neat to see it all work in sync.

Musical Highlight: I think “You and Me” is one of the most underrated love songs out there. I love how it’s romantic without falling into sappiness. It’s earnest, it’s sweet, and it’s “just enough for me.”

One More Thing: I think this might be the most GIF’ed episode of The Muppet Show, with a couple of popular ones coming out of this episode.

Okay, One More Thing: According to RhymeZone.com, there really isn’t any word that directly rhymes with “innocence.” Cooper did his homework! (Which would mean more if school wasn’t out forever.) 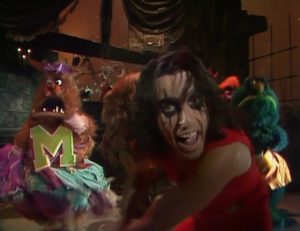 Click here to be a demented, sick, degenerate, barbaric, naughty freako on the ToughPigs forum!