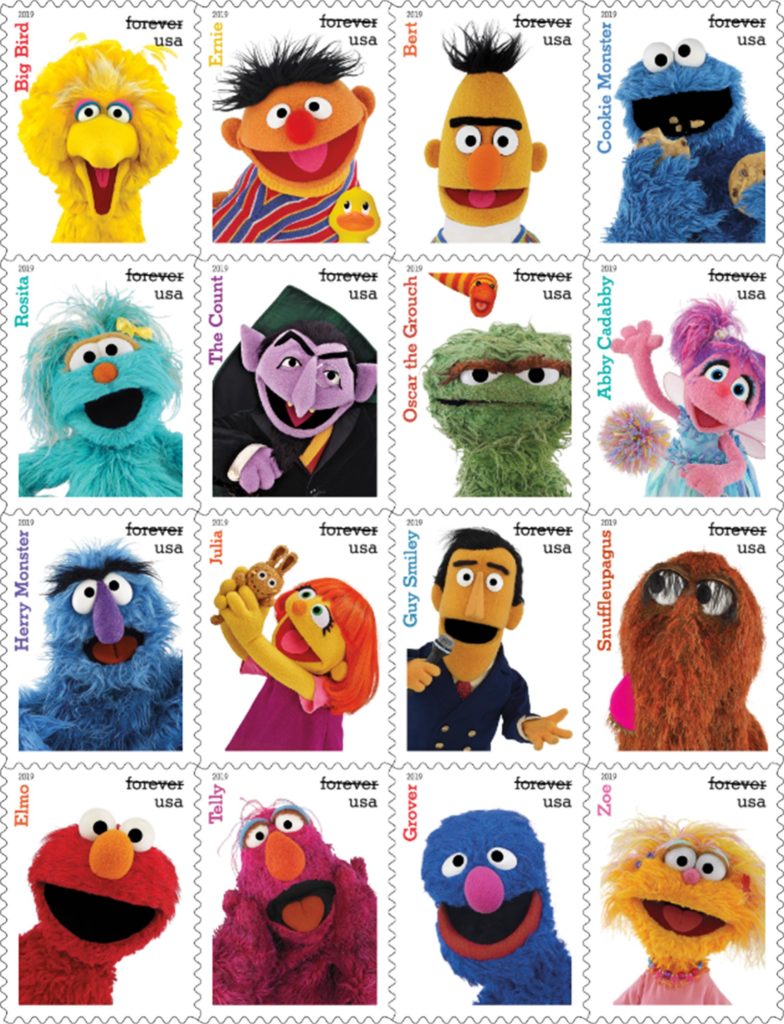 Hey, have you heard about the Sesame Street postage stamps that are coming out soon?

Of course you have. You read about it right here on ToughPigs.com! Or, if for some stupid reason, you didn’t read about it here, you read about it on some other website. Or all of your friends and relatives posted it on your Facebook (“I thought about you as soon as I saw this!”). Or your dad told you that he saw it on Good Morning America.

Yes, everyone’s buzzing about the Sesame Street stamps, which will reportedly be available sometime “soon.” If only anyone sent letters anymore! I guess this will give us a reason to: “Dear Grandma, I hope you like the Grover stamp on this envelope. How’s your budgie doing? Give him my love. Hey, have you ever noticed no one sends letters anymore?” 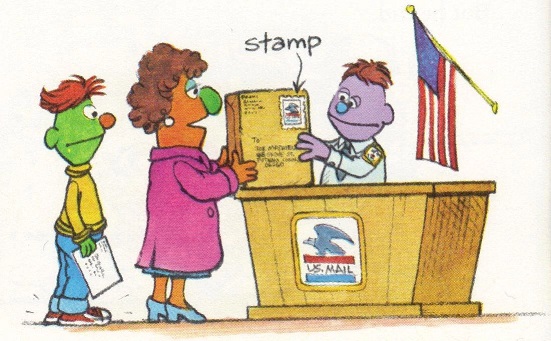 Something like that. Yes, it’s great to see an American institution like Sesame Street recognized by an American institution like the Postal Service, and this is a nifty way to commemorate the show’s 50th anniversary. When I first heard the news and saw the preview of the stamps, I was so excited thinking about all the things I was going to mail — rubber duckies, birdseed, cookies, pigeons — that I almost forgot to scrutinize which characters were included and which ones weren’t. But for the most part, the choices make sense. As Tough Pigs’ own Anthony Strand pointed out to me, there’s at least one Sesame Street Muppet who premiered in each decade from the 1960s through the 2010s. That’s pretty impressive! (I’ll pause here while you match up each character with their decade of origin.)

But the truth is, there’s a gaping hole in this set. As sharp-eyed Muppet fan Dan noticed immediately over on the Tough Pigs forum, there’s one significant character missing. Thus, these first-class Forever stamps will forever be second-class in my eyes, because they have a gaping hole shaped like Prairie Dawn. 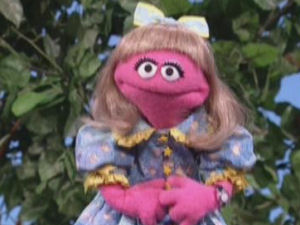 Come on, Sesame Workshop and the US Postal Service! Prairie Dawn has been on the show since the early years, and in that time her character has evolved in delightful ways. She started out as essentially just “little girl,” but the writers and her longtime performer Fran Brill turned her into a multi-dimensional, strong-willed, and – most importantly – very funny character, whether she’s playing straight man to Cookie Monster, spouting off a precocious line of dialogue, or trying desperately to keep her latest pageant from going off the rails.

Under her current performer Stephanie D’Abruzzo, Prairie continues to be one of the stealth MVPs of Sesame. It took Sesame Street until the ‘90s to earnestly start fixing the gender imbalance issue of its male-dominated Muppet cast, but Prairie Dawn was there way back in the early ‘70s, doing her thing and holding her own. Doesn’t that deserve a stamp, for crying out loud?

Okay, so Prairie Dawn should have her own stamp. We’ve settled that. But the sheet the USPS is selling has exactly 16 stamps, so if they were to add her, who would they remove? Let’s take a look.

Several of the characters featured are pretty much non-negotiable. Big Bird, Oscar, Bert, Ernie, Cookie Monster, the Count, and Grover have all been around since either the very beginning or close to it. And people love those guys. If you eliminated the Cookie Monster stamp, nobody would buy these, and the post office would go out of business, and nobody would ever get their Oriental Trading catalogs and the nation would suffer from a severe shortage of paper pretzel eyeglasses. So those guys have to stay.

I probably should have included Snuffy in that last paragraph, because he’s another old-school favorite. He belongs on a stamp too. Hey, you know what would be funny? If you dropped a letter in the mailbox with no stamp on it, and then when it came back to you, you took it to the post office and you were like “But I put a Snuffleupagus stamp on it! It was RIGHT THERE! I saw it! Don’t you believe me?!” And the postmaster would be like “Oh, sure, postal customer. Boy, you and your imaginary stamps!” That would be funny.

There may be a few people over the age of 35 or so who would happily give Elmo the boot, but you can’t argue with the fact that he’s one of the most popular characters in the show’s history, and he’s been a prominent part of it for more of those 50 years than not. (Perhaps the Elmo haters will find some solace in considering their Elmo stamps getting CANCELLED.) Abby Cadabby is in a similar position. She’s been on the show longer than you think – thirteen years! — and in that time, she’s gone from “the new girl” to an essential part of the Sesame Street family, bringing a lot of energy to the show, and once singing a song called “For Broccoli Hurray-Hurrah.” 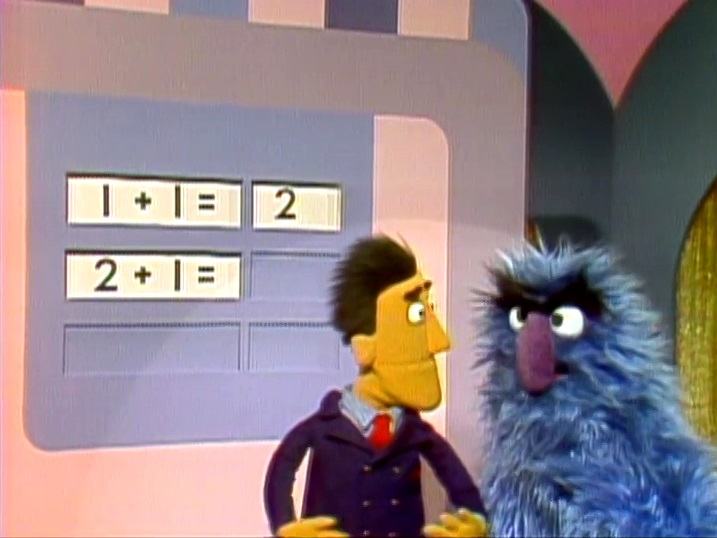 I was pleasantly surprised to see Herry Monster and Guy Smiley on the stamps. The average person might not be able to name them, but they’d probably have fond memories of watching a mild-mannered monster banter with kids and America’s favorite game show host speaking loudly. Also, the inclusion of these characters guarantees additional representation of performers Jerry Nelson and Jim Henson.

Rosita and Zoe were both introduced in the ‘90s, and both of them have outlasted a lot of other characters from the same time period to become Sesame Street mainstays. Rosita is one of the sweetest Sesame Muppets, and she was the first Latina Muppet to become an important regular. I suppose one could make the case that Zoe has never been quite as well-defined a character as Prairie Dawn, but ditching one Fran Brill Muppet for another wouldn’t be a victory. Plus, her insistence on treating her pet rock Rocco as a living creature to Elmo’s annoyance is always amusing to me, so she makes the cut.

We’ve spent less time getting to know Julia than any of these other Muppets, but as the show’s first featured character with autism, her introduction was one of Sesame Street’s most significant developments in years. A lot of fans love her and identify with her – for proof, look no further than the social media reaction when she appeared in the Macy’s Thankgsiving parade last year. 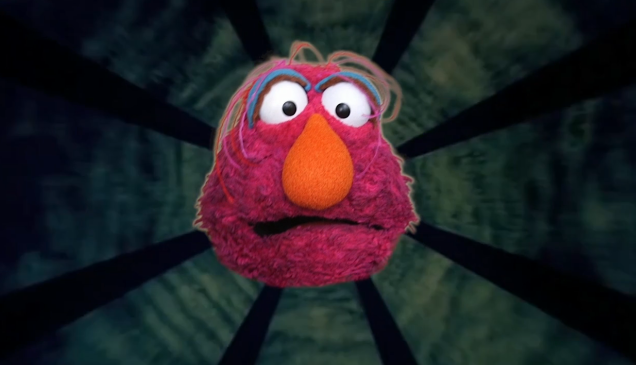 That leaves Telly. And… well… here’s the thing. I don’t know if everyone will agree with me here, but… I love Telly and I’m so happy he’s on a stamp! Despite being a hilarious character and a regular for decades, Telly has never been featured on as much merchandise as his friends. He was even left off the cover of the 40th anniversary book!  Putting him on a stamp is the LEAST the Sesame people can do. They should have put him on all the stamps. That’s right… Each of the 16 stamps a different Telly pose. I would buy 33 sheets.

Well, that’s all the stamps, and I couldn’t figure out a place to put Prairie Dawn. Sheesh. I feel as frustrated as Bert the time Ernie wouldn’t stop talking to him while he was trying to sleep.

WAIT A MINUTE. Bert… Ernie. Bert… Ernie. Bert and Ernie! That’s it! Bert and Ernie each have their own stamps, which is fine — they’re both swell, and “Rubber Duckie” and “Doin’ the Pigeon” are excellent solo numbers – but 99% of the time, the audience thinks of them as a duo, a pair, a matched set. Bert AND Ernie. Ernie AND Bert.

All they’d have to do is let our favorite roommates share a stamp. That reinforces Sesame Street‘s longtime pro-sharing stance, and it leaves room for one more! The Prairie Dawn stamp could look like this: 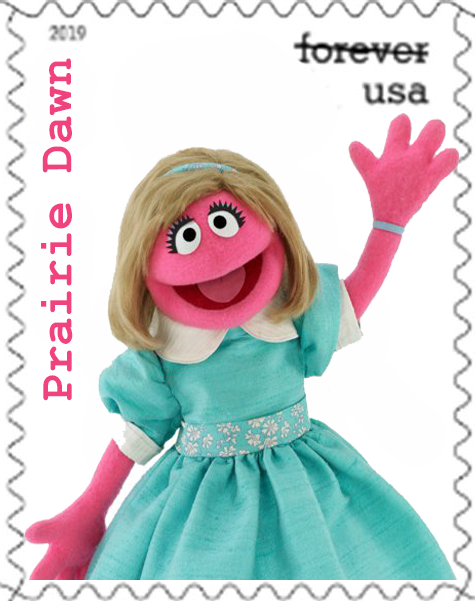 And then the Bert AND Ernie stamp could be something like this: 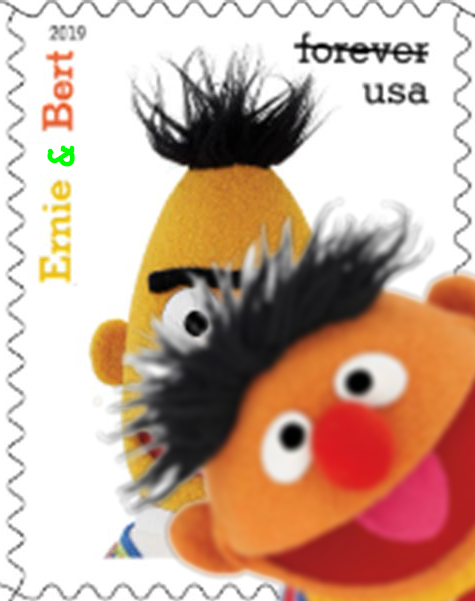 Click here to leave a forwarding address on the Tough Pigs forum!