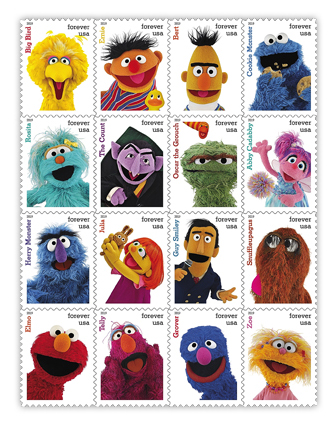 Finally, a reason to go back to using snail mail.

In honor of Sesame Street‘s 50th anniversary, the United States Post Office has announced that they’ll be releasing a set of stamps featuring all our favorite Muppets!

I mean, just look at that cast of characters above.  It’s already amazing that Bert and Ernie will be immortalized on a stamp, but Guy Smiley? Herry Monster??  If only Herbert Birdsfoot could’ve made the cut.

This isn’t the first time Muppets have been honored by the USPS.  In 1999, Big Bird graced a stamp in a set honoring the 1970s, and in 2005 a set featuring Jim Henson and the Muppet Show characters was released in honor of Kermit’s 50th anniversary.

There’s no official release date yet, but we have been assured that the stamps will be available later this year.

Click here to send a self addressed stamped envelope to the ToughPigs forum!

A Muppet a Day…