Ladies and gentlemen, frogs and pigs…

Beauty is skin deep. But ugly goes right down to the bone.

Put your hands together for the Ugly Toy Contest Award Winners!

The nominations were divided into seven categories below. Readers placed their votes for the ugliest toy in each category, plus one vote for the one toy that they thought was the single ugliest toy.

(thanks to Captain Cully)

“This Kermit looks like someone took a mallet to him.”
— Zack the Dog

“I couldn’t believe that (a) Henson would approve of this likeness, and that (b) Disney would even sell something like this. He looks like he’s been squished in a vice and his innards are about to explode from his eyes. When I saw this for sale at MV3D, I told my friend that that is one of the ugliest toys that I have ever seen. I hope this wins the contest.”
— Chris Caines

“Move over, Zsa Zsa. This is Miss Piggy at 80, after several botched face-lifts (and marriages).”
— Kynan Barker

“She looks like she was baked in the oven!”
— Zack the Dog

presented by
The Crocheted Miss Piggy

(thanks to Michael Dixon & Mar Quinn)

“I honestly thought she was one of those ‘novelty mutated vegetables’ that resemble well-known celebrities.”
— Luke Robbins

“She looks like a drag queen dressed as Phyllis Diller.”
— Chris Caines

“I weep for the death of the spirit and the soul.”
— David Beukema

presented by
A Baby Gonzo Doll 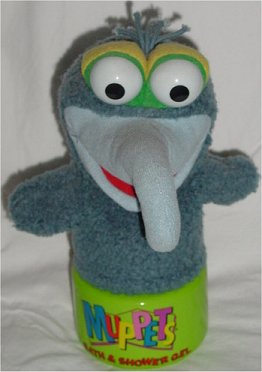 “The eyes push this one over the edge.”
— David Beukema

“He gets my vote, not so much for the ugliness of his Gonzo-ositude, but for being a really terrible toy. Not to mention naked.”
— Kynan Barker

“The Gonzo dolls are pretty much on an equal level of ugliness, but this one is intriguing in that it appears to represent the tragic results of Gonzo’s Chainsaw Juggling act.”
— Mike Horner

presented by
The Pedigree Wembley Doll

(thanks to Michael Dixon & Mar Quinn)

“This must be the caricature Gobo had done at Six Flags.”
— Ryan Roe

“This, ladies and gentlemen, is what would happen if Red and Gobo ever mated.”
— DW McKim

“He isn’t ugly. He just doesn’t look like a Fraggle is all.”
— Kynan Barker

“Ow… wow. Those are all horrible. I’ll go for Herry, because it looks like something my dad would get on sale after Halloween.”
— Carolyn Wiesner

“Looks like Herry was in the Alaskan water when the Exxon Valdez went down.”
— David Beukema

presented by
The Labyrinth Fiery Costume

(thanks to Tom Holste)

“This is my vote for Ugliest Toy, because everything else is ugly, but this one also succeeds in making my skin crawl.”
— Diane Bradley

“Like a toy version of a mean uncle or a neighbor who would terrorize the neighborhood kids.”
— DW McKim

“He’s completely evil. Bendy Piggy I think I could slap to her senses, but Direct Connect Fozzie wants to dump strong acids on my tissues, process my brain into canned meat, and make me eat it on Wheatables.”
— Carolyn Wiesner

This toy was my personal choice for Ugliest Toy.

It only got two votes in its category, and didn’t get any votes for Ugliest Toy, so that shows you how my finger is on the pulse of popular taste. But I have to take a moment to celebrate how amazingly horrible this toy is.

I mean, imagine you’re a German child. (If you are a German child, you can skip this step.) Your grandmother knows that you’re a fan of Das Muppets, so she buys you this Piggy doll as a special treat for your birthday. This set the old lady back 235 deutschmarks, so you can’t just throw it away.

But it’s too big to stuff it under the bed when she’s not around. You can’t hide it in a drawer, or stick it in a box in the closet. You’re just going to have to live with it, squatting malevolently in a corner of your bedroom, staring at you, giving you bad dreams, gradually sucking all the joy out of your life. You’re stuck with it.

Giant, hideous Miss Piggy doll — too ugly to own, not ugly enough to win an Ugly Toy Contest. You are a true loser in every sense of the word. I salute you.

And now, click here for the 2002 Kay Kamen Award for the Ugliest Toy We Could Find.