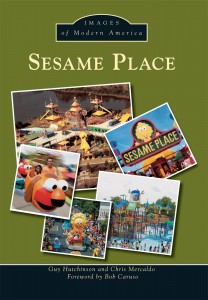 One of the great things about Sesame Street is, hidden within its longevity, there’s still so much to learn about the different branches of the company.  As fans, we’ve been fascinated by so much beyond the show itself, like the merchandise, the artistry, the books, the video games, and so on and so on.  Only in an alternate universe where ToughPigs is a full-time, well-paying job would we be able to devote enough time to cover it all.  And even that would take years and years (and more years).

Among those Sesame Street offshoots is the Sesame Place theme park in Langhorn, Pennsylvania.  Lucky for us, there’s a brand new book out there that covers the history of the park, with tons of photos never before seen by the public.  I’m ecstatic that someone else did all the legwork and research, and all I have to do is share what I’ve learned!

The researchers in question are authors Guy Hutchinson and Chris Mercaldo (note that Guy Hutchinson will be joining us for a series of Sesame Place articles throughout the week!), and they’ve been incredibly thorough in providing information both old and new about Sesame Place.

Backing up, let’s talk about this: Sesame Place is a bizarre concept.  Speaking as someone who considers Walt Disney World as my Jerusalem, how weird is it that the Children’s Television Workshop decided to build a theme park based on a (then) 10-year-old TV series in the middle of Pennsylvania with attractions such as a ball pit and a giant sandbox??  Of course, the park has evolved to keep up with the times, including more preschool-friendly rides and water park attractions, but it’s still strange that it existed at all in 1980.

One of the most interesting parts of the book is seeing how that evolution took place.  The book is split up into five different eras, including the conceptual stages, the early years, multiple additions, and what the park includes today.  As you read it, you can flip back and forth between the sections to see what current attractions used to look like, or how an obsolete ride transformed into something more exciting.

The most impressive thing about the book has got to be the photos.  There are so many of them, it might as well be marketed as a (tiny) coffee table book.  Plus, I’d much rather be poring over pictures of Sesame Place than reading a long-winded history of the park, especially since it’s such a visual medium.  Wouldn’t you rather look at pictures of a Telly Monster walkaround puppet than read about the materials used to build a water slide?  Those are your options. 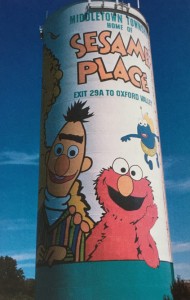 As an adult-aged fan without preschool kids in my life to take to the park, I’ve never been to Sesame Place.  So I find myself wondering what I’d appreciate about it if I went today.  Or decades ago.  The parades would be a highlight, seeing the characters we love march down the street or ride on a float.  Some of the merchandise is incredible and unique to the park, including plush of less popular characters like Telly, Herry, and the Two-Headed Monster (more on this in another article later this week).  I’d love seeing the Sesame-themed rides from afar that feature things like a giant Rubber Duckie, pirate Cookie Monster, and the Count’s castle.  And I’d appreciate the vintage-style stuff that still carries the old Sesame Place logo, the “Big Bird bridge”, or references to forgotten characters from my youth.

As fascinating as I found this book, I’m a little worried that the intended audience may not be very large.  If you’re not someone like me who wants to soak up every bit of Sesame Street history, or someone who loves theme parks as much as we love Muppets, you’d probably never even know it exists, let alone consider purchasing it.  Hopefully people will discover it on their own, because it really is a great in-depth look at a tiny slice of Sesame’s legacy. 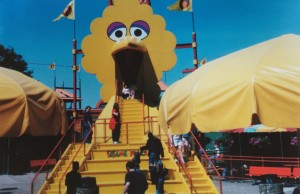 So now the question remains: As a Sesame Street fan, do you need this book?  If your bookshelf looks like mine, with every Henson reference book from “The Works” to Roscoe Orman’s memoir, then absolutely yes, this will fill a void in your life that you didn’t know was missing.  Otherwise: Maybe.  I guarantee that you’ll love the dozens of photos, and you’ll be drawn into the park’s history more than you expect.  But for a casual fan, there may not be very much re-readability.

And as we said at the top of this article, we can help make the decision easier for you by helping with a ToughPigs-exclusive discount!  Save $2, get a signed copy of the book, a park map, and a Sesame Place token!  Just click here and enter the secret code TOUGHPIGS at the checkout!  Many thanks to the authors and publishers for the promo!

Whether you choose to buy the book or if you decide to visit Sesame Place in person, you will be glad to learn more about this 35-year-old institution and yet another piece of Sesame Street history. 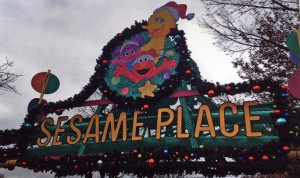 Click here to get a weekend pass to the ToughPigs forum!

**Please note that all of the photos found in this article come courtesy of the Sesame Place book and are owned by their respective copyright holders.