I can’t stress enough how floored we were by your entries to our Sesame Street Comic Book contest.  The creativity of Muppet fans knows no bounds.  Add that to the bottomless pit of comic books, comic strips, and other comic references, and we ended up with some fan art gold.

Earlier this week, we shared a series of the runners-up, which had some incredible entries.  So as you can imagine, the rest are gonna knock your socks off.

Below, you’ll find our editor’s picks, which are our favorites that came close, but didn’t make the cut.

After that, our celebrity guest judge Jay Fosgitt lent his artistic and Muppet fan expertise to help choose the five runners-up (who will be receiving free copies of the Sesame Street comic book) and our grand prize winner (who will get a Muppet caricature by Sesame comic artist Rolo Mallada).  Jay gave solid explanations for each of his picks, so be sure to give those a read.

And hey, it’s worth mentioning again: Go to your local comic shop and check out the Sesame Street comic book!  The first three issues are out now! 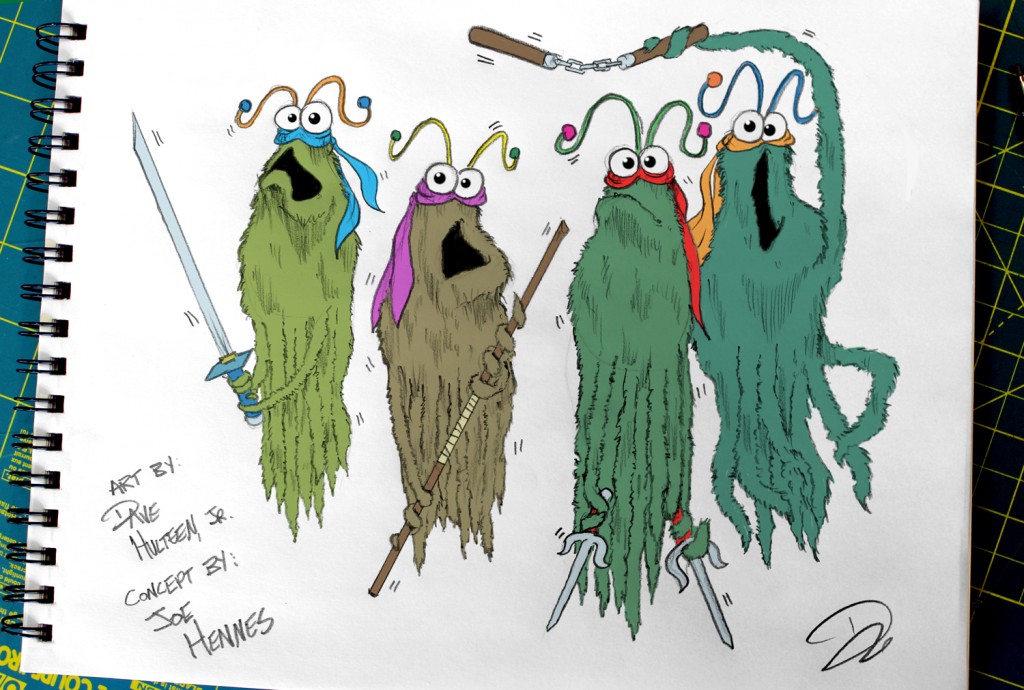 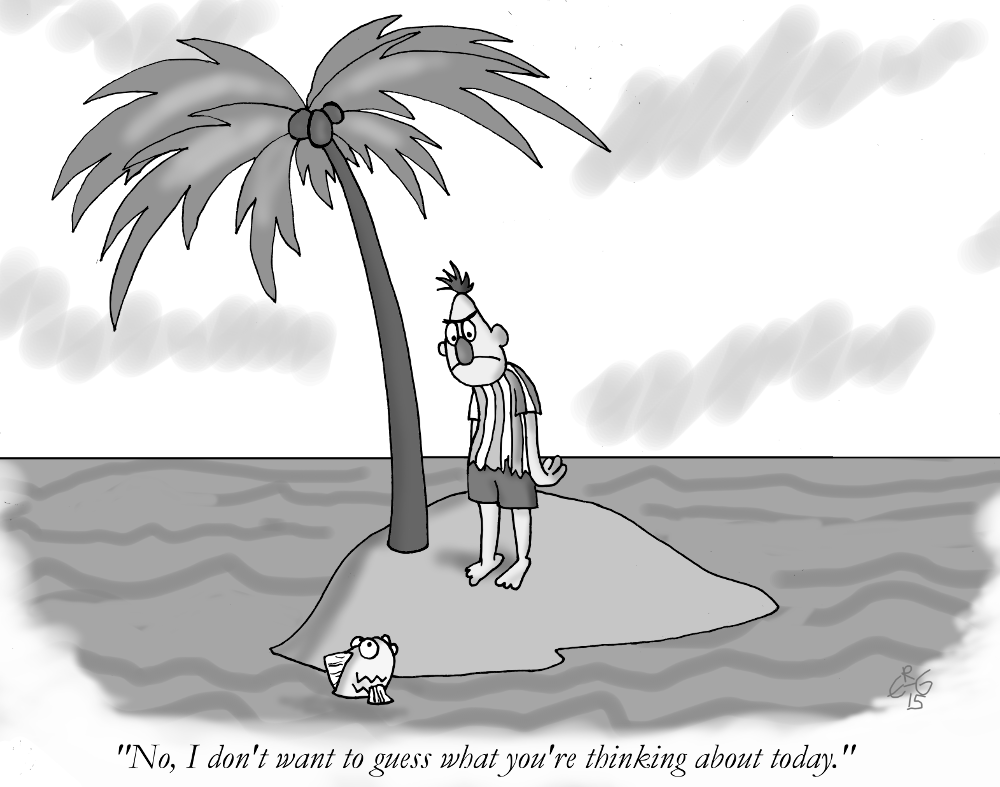 Bert in a New Yorker Cartoon by Evan G. 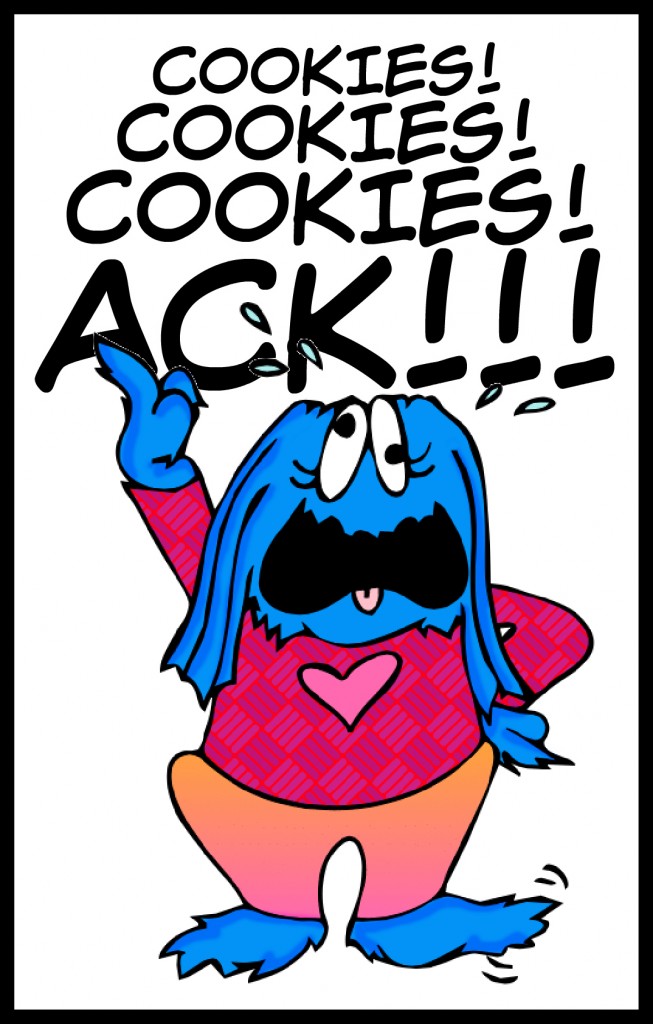 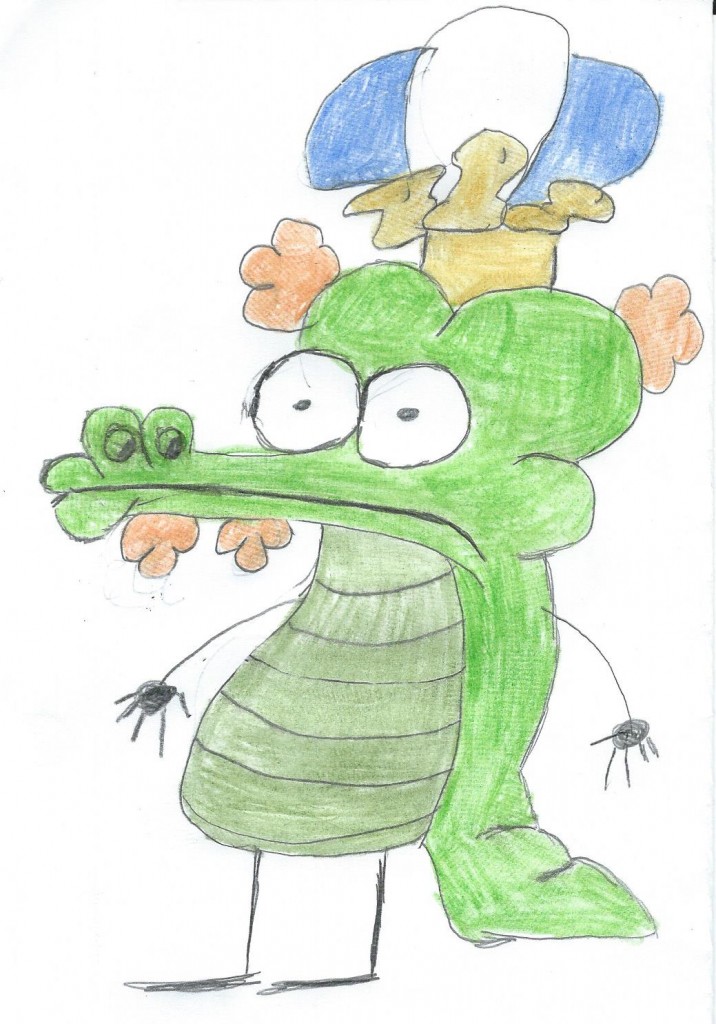 The Alligator King in Pearls Before Swine by Matthew Soberman 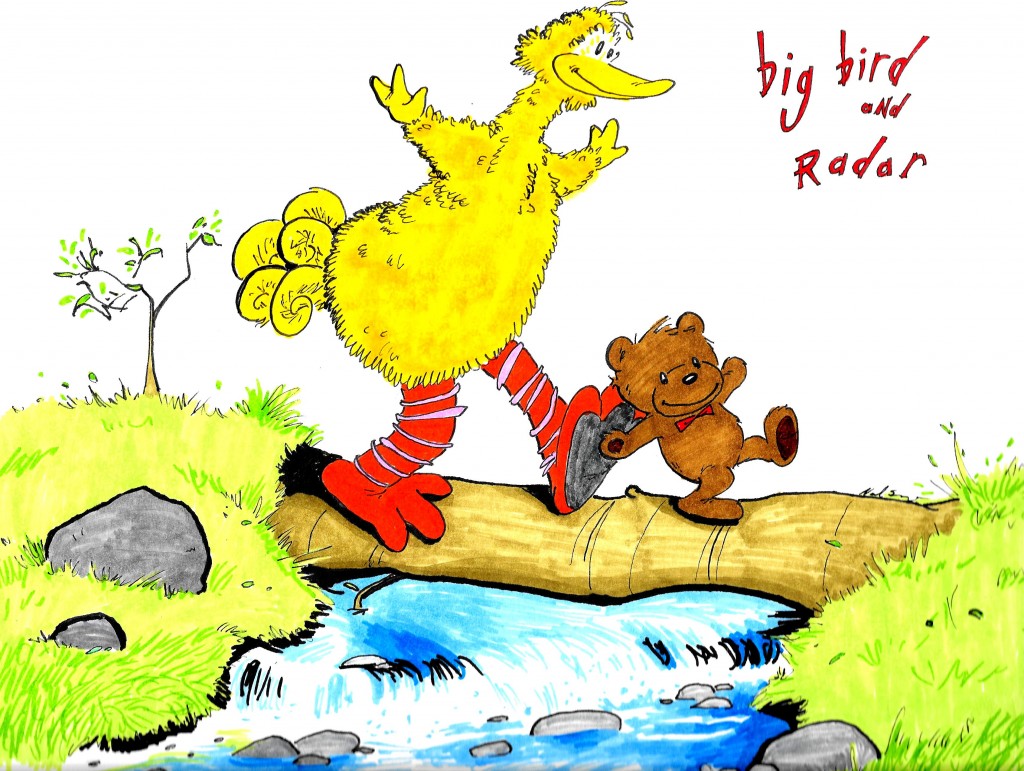 Big Bird and Radar as Calvin and Hobbes by Noel Schornhorst 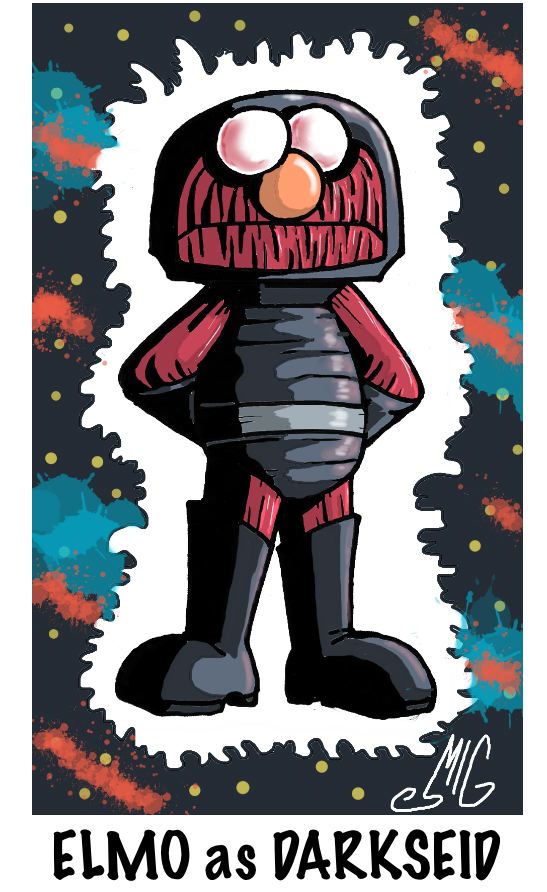 Elmo as Darkseid by Smig 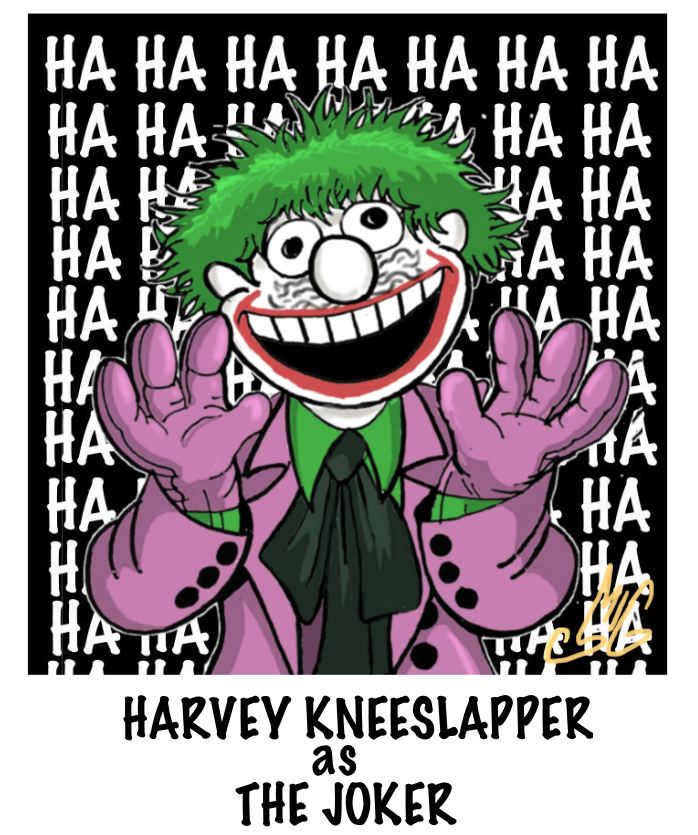 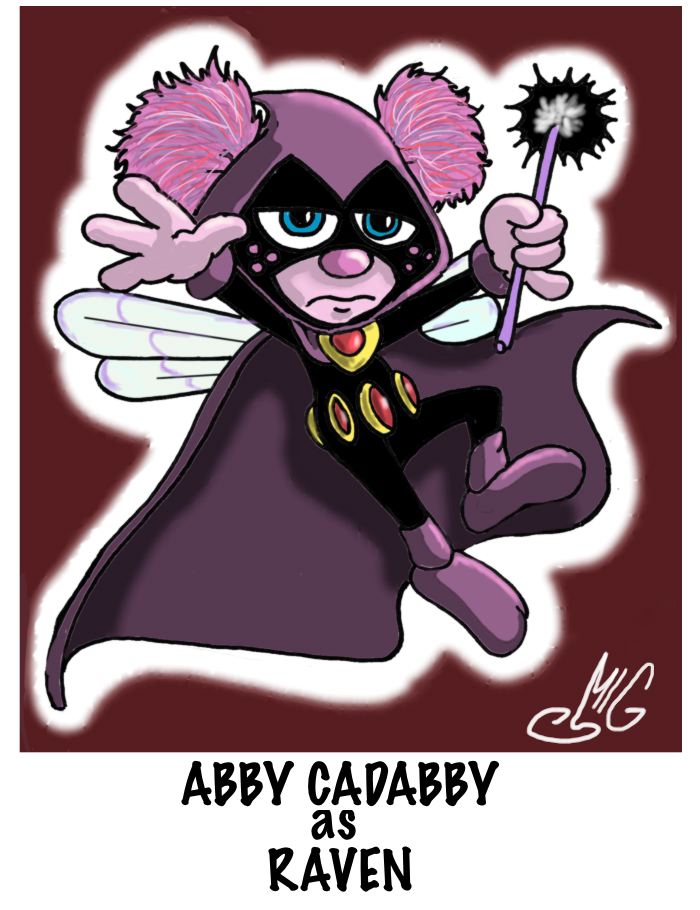 Abby Cadabby as Raven by Smig 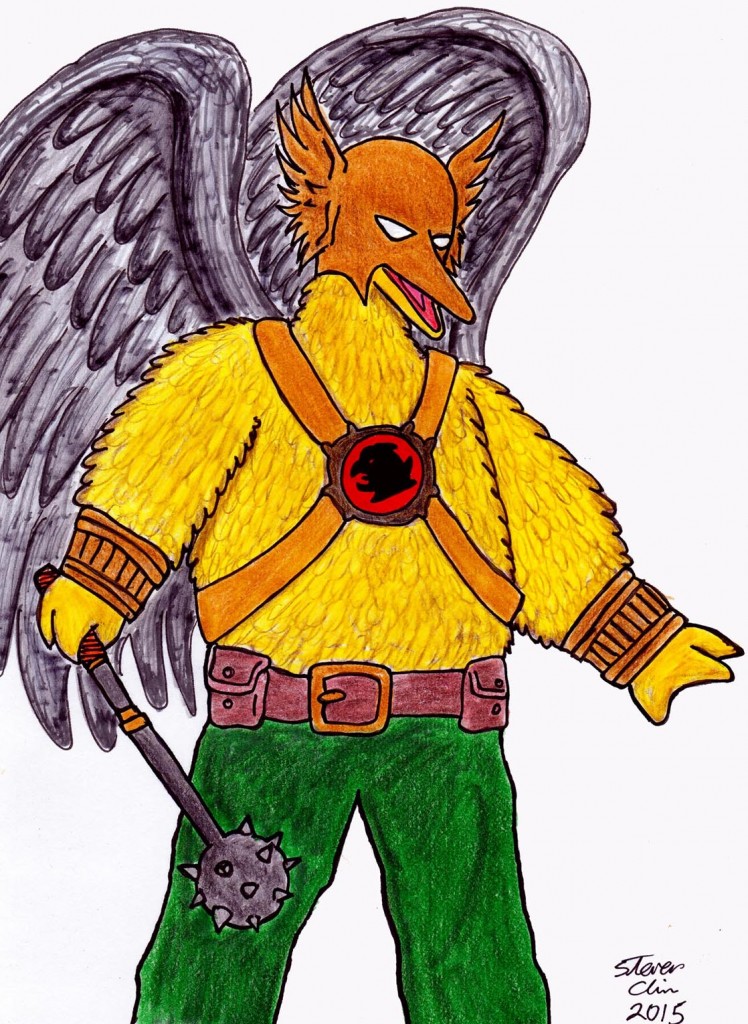 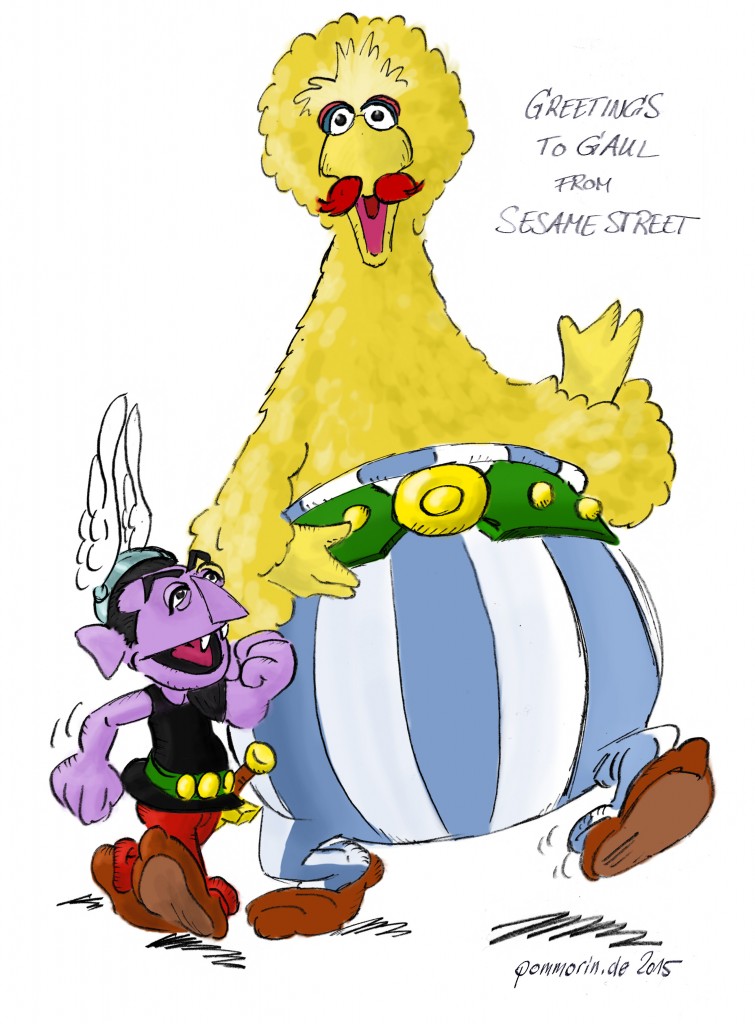 And now: THE WINNERS!  As chosen by Sesame Street comic artist Jay Fosgitt! 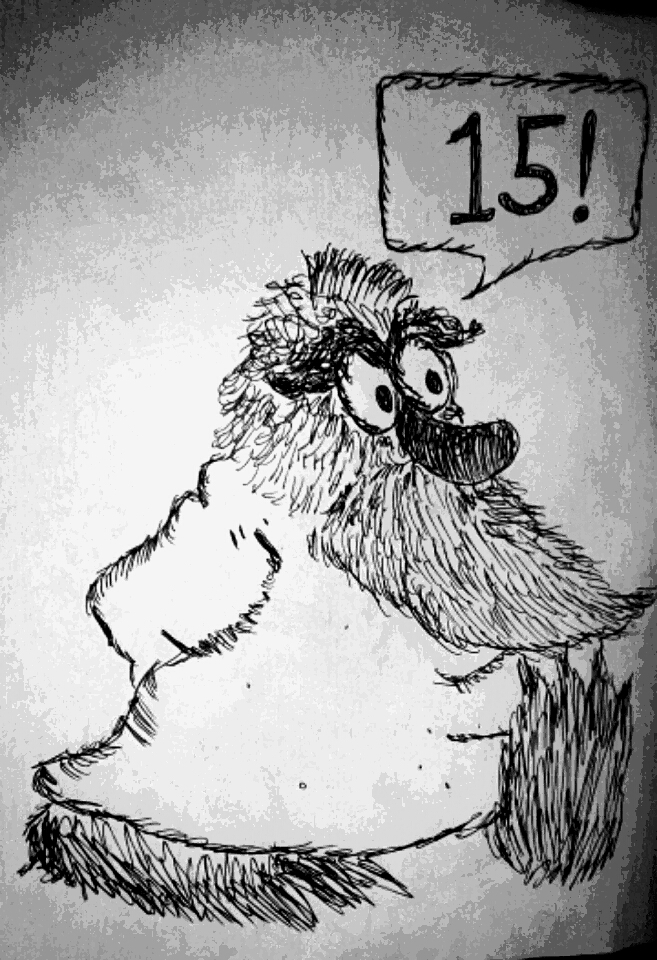 HONORABLE MENTION (prize – free copies of the Sesame Street Comic Book!): Such a unique choice for a mash up. I’d never have thought of mixing Robert Crumb’s characters with Sesame Street–well, maybe the scene in “Fritz the Cat” where Fritz hides from the cops in a trash can. That’s so Oscar. But other than that, just an inspired pairing. And the gritty fuzziness to the piece suggests both Muppet monsters and the prevalent early 70’s underground comix cartooning style perfectly. 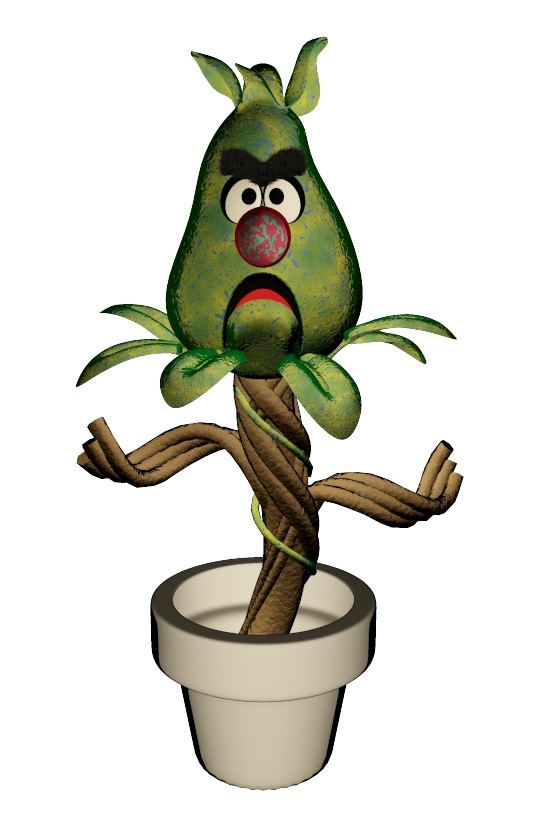 Stinky as Groot by James L.

HONORABLE MENTION (prize – free copies of the Sesame Street Comic Book!): The concept is fun, and such an ideal pairing. The execution is pristine and eye catching. There’s no question which Sesame Street character is represented here. I think a background (ANY background would have been nice to see) suggesting Starlord’s ship would have helped sell the mash up, or maybe even having someone like Fat Blue/Mr.Johnson as Drax in the background to firm up the parody. 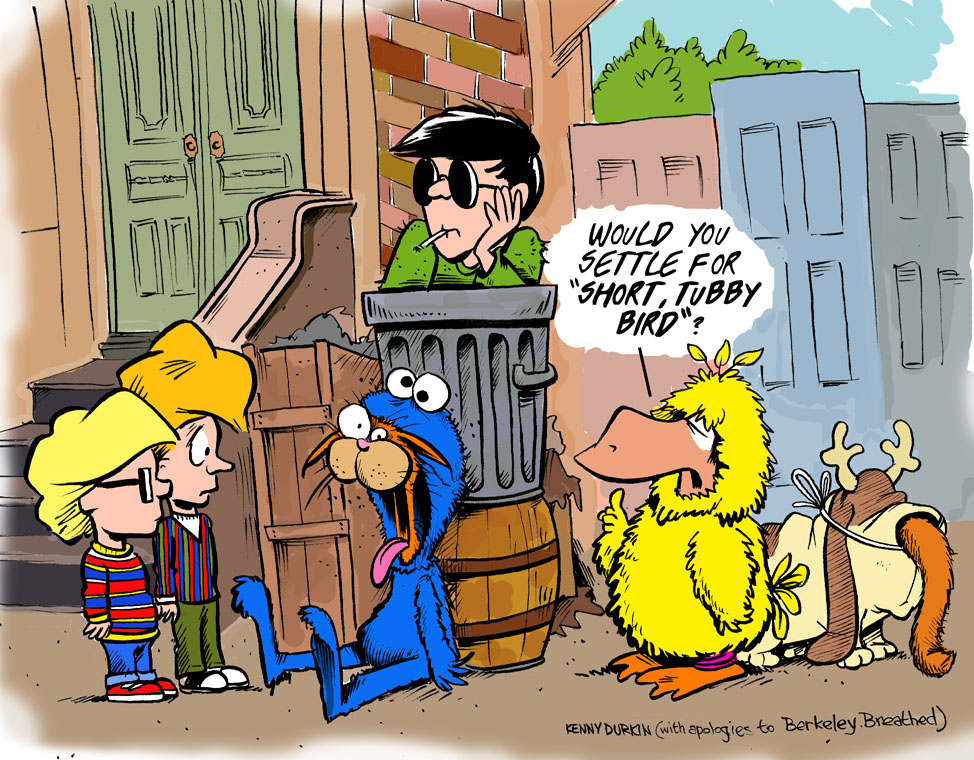 RUNNER-UP (prize – free copies of the Sesame Street Comic Book!): For sheer skill at rendering Berke Breathed’s characters so faithfully, and for coming up with such an original, unpredictable mash up. If this piece had been a little more Sesame-centric than Bloom County-centric, it would have been in the top three easily. 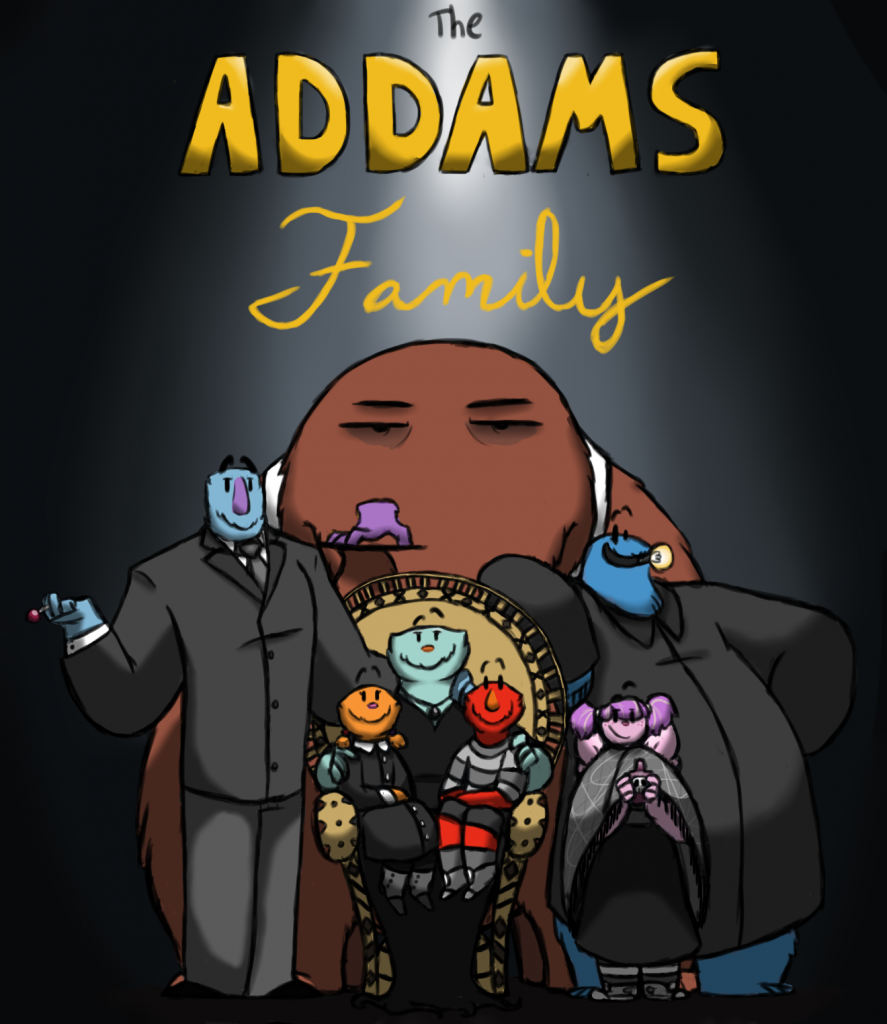 RUNNER-UP (prize – free copies of the Sesame Street Comic Book!): Beautifully executed, and an original, unpredictable concept. I think I would have liked to see the Sesame Street characters carried just a bit further into Addams’ designs to really sell the idea. 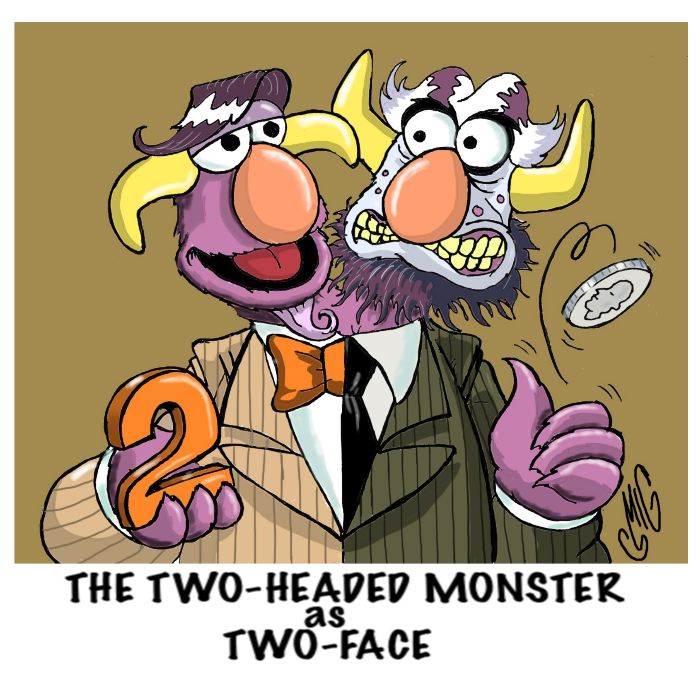 The Two-Headed Monster as Two-Face by Smig

RUNNER-UP (prize – free copies of the Sesame Street Comic Book!): A familiar pop culture pick executed in an extremely original manner. I’d never have thought of using this dual-identity Muppet as Batman’s duel-identity foe, and I’m kicking myself for it. Great line work and coloring, as always. 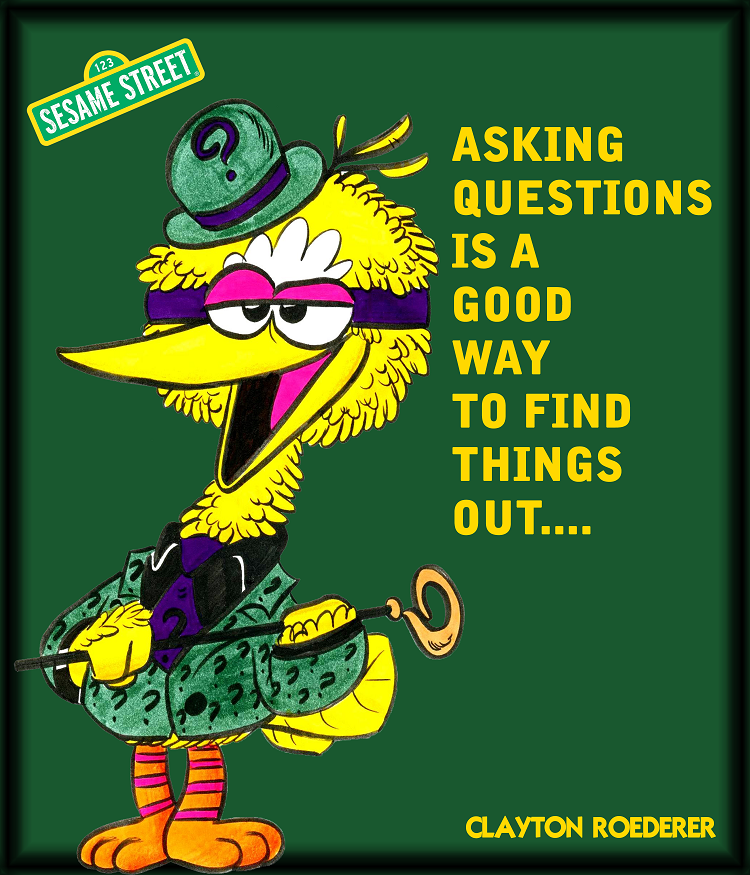 Big Bird as The Riddler by Clayton Roederer

3RD PLACE (prize – free copies of the Sesame Street Comic Book!): Beautiful line work, great gag and dialogue, and an unconventional pairing. I would have liked to see this colored either in all traditional art media (i.e.marker.colored pencil, etc.) or else all digital color, just to give it a more uniform look. If that were the case, I could see this being a professionally licensed sesame Street product (and I would buy the heck out of it)! 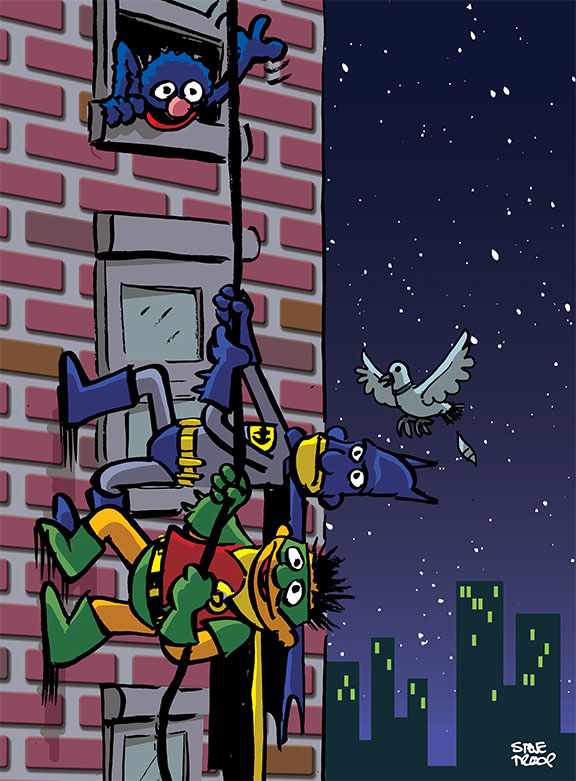 2ND PLACE (prize – free copies of the Sesame Street Comic Book!): It’s possibly the most recognizable reference in all the applicants, but the quality seen here makes it shine. The cartooning style is so wonderfully chunky and free in its lines–the characters are drawn so joyously organic despite the use of a decidedly inorganic technology to create the piece. I love Bert’s expression as Bernice is about to land on his head. And Grover’s exhuberant response to seeing them is endearing and funny. I do wish the artist had continued the organic quality of his characters with the way he drew the building and background (the chunky stars in the sky, however, fit the characters perfectly). The flat, precise digital brick work and city skyline distracts the eye from an otherwise gorgeous cartoon. 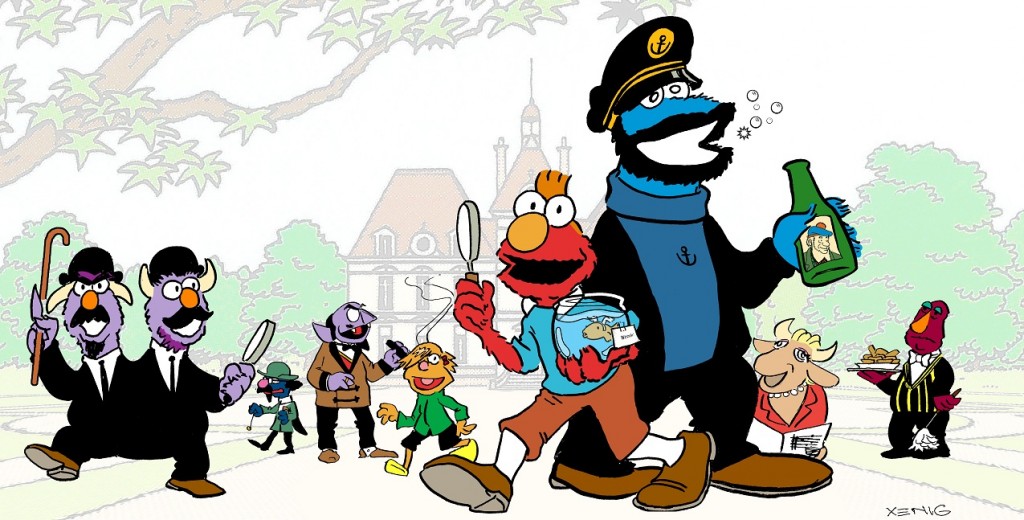 1ST PLACE (prize – your own Muppet caricature by Sesame comic artist Rolo Mallada!): This piece has it all–an inspired, original concept, a slew of Sesame Street characters to play with in TinTin’s world, and a really fun, loose cartooning style that screams “Muppets!” while still having that familiar Herge feel to the design and theme. The Two-Headed Monster as Thomson and Thomson is an extremely inspired choice. And Telly as Nestor the butler really stands out for me in this piece–a lovely little cartoon character unto himself. And the background is superb–a perfect fit alongside the characters in the foreground, and lovingly detailed. While I appreciate fading out the background to make the foreground characters pop (I employ this in my own work frequently), I would suggest a little less fading here, just so that great background isn’t entirely washed out. All in all, a brilliant pop culture mash up!

Congratulations to our winners, and a huge congrats to Noah Ginex for winning our grand prize!  You’ll be getting your very own Muppet caricature!

And many thanks to everyone who entered our contest!  We are beyond impressed with all of you!

And once again, thanks to Jay Fosgitt for joining us as our celebrity guest judge! You can keep up with Jay’s work on his website.

Click here to scale a building on the ToughPigs forum!

by Joe Hennes and Jay Fosgitt