The Worst of The Muppet Show: Rich Little

This article was written by ToughPigs’ own Jarrod Fairclough!  Thanks for suffering through Rich Little for us, Jarrod!

A little after I’d done my review on the ‘My Muppets’ app, Joe and Ryan asked me if I’d be interested in reviewing some of the worst episodes of ‘The Muppet Show’.  This was no easy task.  Let’s face it; the show was almost always fantastic.  And yet there were a couple of episodes which always seemed to be mentioned when trying to figure out which ones weren’t as good.  Today, I’m going to talk about one of them. 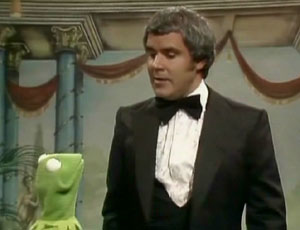 Ugh, even typing that made me feel a little sick.  You can watch it (if you dare) on YouTube here.

Okay, let’s just get this out of the way now:  This is one man’s opinion.  It doesn’t mean I’m right, but nor does it mean I’m wrong.  So if you want to stick up for this episode, by all means, go ahead and do it.  But I’m about to tear it a new one.

Rich Little is an impressionist, who people like me might remember from a Family Guy episode where he pretends to be the ghost of Ronald Reagan on an old ham radio.  According to an interview I did with Seth MacFarlane, that’s actually a true story!  (Note: Interview may have never actually occurred.) 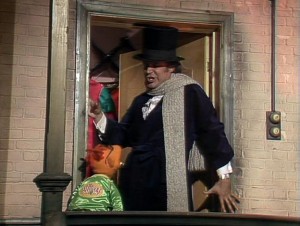 The episode probably loses a lot for me, in that I don’t know what some of the people Rich impersonates in this episode even sound like.  He begins with a WC Fields voice, but having never seen anything WC ever did, I have no idea if it’s good or not.  (Editor’s note: It’s not.)  So while Scooter looks on being ‘wowed’ by all the voices, I’m just sitting there going ‘Okay, next.’  I just have an issue with impressionists.  To me, it feels like a lot of self-serving.  It’s like these guys get on stage and go ‘Look!  Look!  Look what I can do!’.  Now, in all fairness to them, that’s most entertainers, but these guys seem to do it with no rhyme or reason.  At least weave some sort of link in to it.  It’s like ‘Now this guy!  Now that guy!  Now him!’.  This opening bit is quite remnant of that.

Kermit’s opening bit is pretty funny, but he refers to Rich Little as a master impressionist.  Though he says it with no conviction.  Does the frog agree with our complaints? 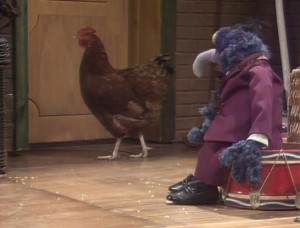 The episode’s plot is pretty good.  Gonzo is auditioning dancing chickens for a number he wants to do.  This is the episode that kicked off the Gonzo/chicken saga, that has culminated in his relationship with Camilla.  So there’s a lot of history in this episode.  Which upsets me, because it suffers from a terrible case of ‘Great Plot / Bad Guest Star’.

Five minutes in, and we get to what is by far the worst segment of this entire episode.  It’s like ripping off a band-aid.  We get the painful part over with quickly, but then we feel sorry for ourselves and feel pretty miserable for the next 20 minutes.  We have come to Rich Little doing impressions of…  THE MUPPETS! 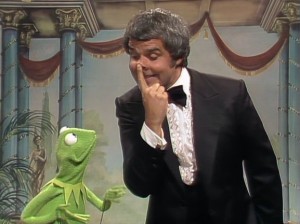 How did no-one at Henson veto this during rehearsals.  Surely they must have known he couldn’t do a Muppet impression to save himself. 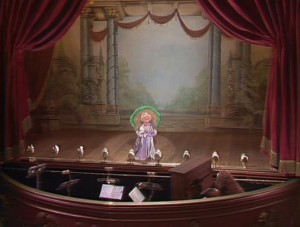 We get a well deserved break from Rich now (thank god) with an At the Dance segment, and then Miss Piggy sings a song.  It is what it is.  The staging looks good, with a full bodied Piggy standing on stage alone. 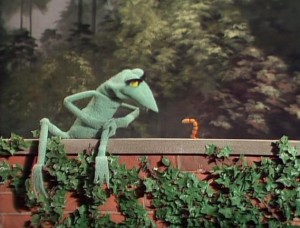 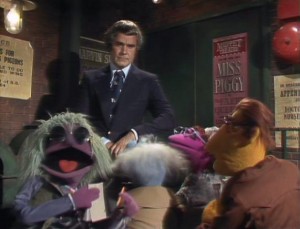 Oh, that’s right.  Rich Little returns to do some more ‘impressions’ for some reporters, including Mildred (being performed by Louise Gold in her first episode), The Newsman, and Fleet Scribbler.  What a champ Fleet is, because while Rich does his voices, Fleet seems to be the only one who realizes how bogus they are, and calls him out on it.  Fleet Scribbler is truly the voice of the audience.  Rich does a Richard Nixon impression, which might be the first one I’ve actually enjoyed in the whole episode so far. Except there’s literally no reason for it – it seems self-serving to me, as I said earlier.  He then does a Liberace impression…  Could this be one terrible guest star foreshadowing another?  (Editor’s note: That was Liberace???) 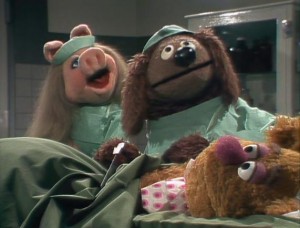 Veterinarian’s Hospital is next.  Funny sketch, same as usual.  What’s strange is Fozzie, who seems to do nothing until the end.  He just lays on the bed, motionless…  Staring in to the nothingness…  Contemplating life, death, the universe, the meaning of it all…  Or, you know, Frank Oz was busy performing Nurse Piggy. 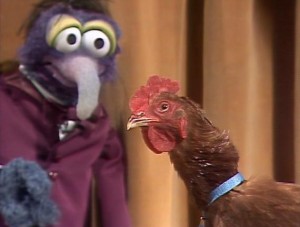 Gonzo dances with his chicken.  It’s pretty funny.  Again, great staging with full body Gonzo standing on the stage holding a leash attached to the chicken.  And the chicken is very lifelike.

Kermit comes out, and introduces a medley of songs from classic musical comedies!  YAY!  As performed by Rich Little!  Oh.  I don’t want to play anymore.  When will this nightmare end? 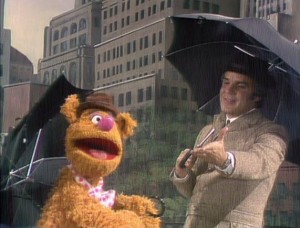 Rich Little impersonates Gene Kelly, with the classic ‘Singing In The Rain’.  But why so nasally?  I went on YouTube and watched Gene Kelly sing it, and Rich sounds nothing like him!  AND NOW HE’S BEING JOHN WAYNE SINGING IT!  WHY?  IT MAKES NO SENSE!  UGH!  SO POINTLESS!

Now he’s being Frank Sinatra.  Look, in Rich’s defense, my favorite singer is Sinatra, so I’m predisposed to hate this, even if it’s great.  So I can’t tell here.  (Editor’s note: It’s not.)  Now Bing Crosby.  Is it good?  I don’t know.  (Editor’s note: You should know by now.)  Please kill me. 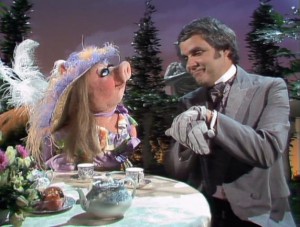 Now he’s singing a duet with Piggy as Maurice Chevalier, the easiest imitation in the history of impressionism.  I just want this to end.  I want to tell my family I love them.  I want to cuddle my niece.  It just won’t stop…  At least he’s not impersonating Muppets anymore…

Okay, I’ll hear this new Muppet voice.  For you. 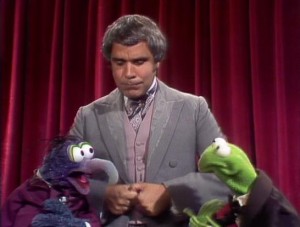 Well, that’s over with.  Thank you for sticking with me during this review.  I think we’re all a Little Rich-er for the experience.  Aaahhh!  Wocka Wocka!

See, THAT’S how you do a Fozzie impression.

Click here to do a terrible impression of the ToughPigs forum!