The following review was written by our pal Jarrod Fairclough, frequent Muppet Mindset contributor and the man behind the @MuppetFanProbs Twitter feed.  He is Australian, which explains some of the funny spellings in the article.  Thanks for all your hard work, Jarrod!

Alright, before I begin, I want to get two things out of the way.

1)      This is weird.  Let’s all just acknowledge the fact that I’m a regular contributor over on The Muppet Mindset, and yet here I am on ToughPigs, a ‘rival’ of sorts.  Truth be told, I’ve been looking to make the leap for a while.  ToughPigs have dental, and bean bag chairs.  The Muppet Mindset has rats in the kitchen, and not in a cute ‘Muppets Take Manhattan’ kind of way

Okay, now that we’ve cleared that up, on with my review of ‘My Muppets’…

This is only the second time I can think of where Australia has gotten Muppet ‘merchandise’ before America, the first being every season of Fraggle Rock sold separately rather than together.   Now you know how I feel here in Australia when you guys get films and the like long before us.  Score one for Jarrod!

Have you ever played the popular iPhone/iPad game ‘Simpsons Tap Out’, where in a kind of ‘The Sims’ fashion, you organize the characters’ lives and their environment, earning things as you go?  Yes?  Well, ‘My Muppets’ is like that!  It’s basically ‘Muppets Tap Out’.  This is a good thing, and a bad thing. 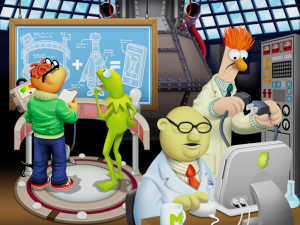 We begin with a very quick back-story, so quick that I barely got a chance to take a screenshot before it moved on.  It seems that Bunsen and Beaker have created something called ‘The Digitizer’, where the characters are transported from the real world, in to a digital Muppet Theatre Stage.  While Kermit and Scooter take a look, Beaker plugs it in, and away we go. 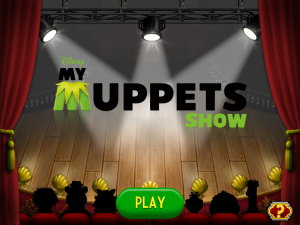 I think the app’s full name is ‘My Muppets Show’, but I’m gonna call it ‘My Muppets’, because that’s what iTunes said.  Also, it sounds less like I’m acting out an episode with my plush toys.  I’ve done that before.  It had ‘our very special guest star, This Piece of Cardboard I Found Under My Bed! YAAAAAAAAY!’.  Here’s the screen we get at the beginning.  Note the guys down the bottom, watching the highly disproportionate Muppet Stage?  That thing’s on a very dangerous slant.  And who’s that next to Beaker?  I have a quick problem with this app already.  Almost every time you exit the game, even for a brief second, you have to sit through this load screen when you return.  It’s frustrating, and unnecessary. 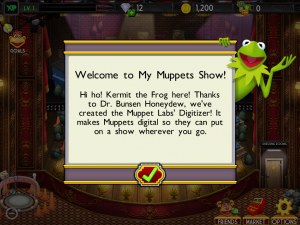 Kermit greets us and sets us up with the general idea of the game, which is to earn coins and diamonds by doing various tasks, like cleaning up the stage, feeding the characters, and making sure the characters are happy.  He then hands it over to Scooter, who is the real star of this app.  Scooter’s always there to let you know what to do.   He doesn’t always explain HOW to do it, which can get a little annoying when you first begin. 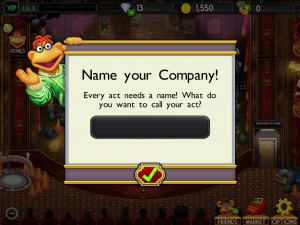 We then come to naming our act.  Most people would put their name in.  I like to put Muppet names in all these sort of things.  My planet on that game ‘Spore’ was called ‘Gobo’.  Here, I’ve named my act ‘Sprocket’. 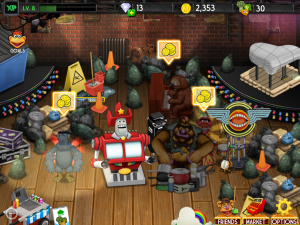 So we begin by adding characters, the first of which is Animal, then Rowlf.  They play some music, and then Sam the Eagle turns up, singing away.  Here’s quick tip 1: In the characters options, you can choose to mute them.  Do it, unless you want to hear incredibly repetitive music played over and over.  This screenshot was taken a little while later, but this is just to show you how messy the stage is at the start, and some of the characters.  I’ll get to the robot and the big thing soon.

Everything you do earns you ‘experience points’, and you move up levels. 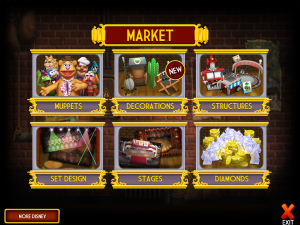 We then go to the Market screen, where you can by Muppets, Decorations, Structures, Set Design, Stages and Diamonds.  Quick tip 2: Don’t bother with the diamonds screen, you have to pay.  I’ll talk about my problems with that shortly…

Everything costs a different amount of either coins or diamonds.  Each Muppet character earns you a certain amount of coins as the game goes on, depending on what ‘Level’ they are on.  You achieve levels by feeding them from a concession stand, which is purchased from the Structures screen.  You also make the characters happy by buying them things they like.  Like a girlfriend.  I had one of those once.  I didn’t buy her things.  She married my best friend.  True story…  Here’s Rowlf’s likes.  There’s a candlestick, some rats playing music, and I can’t tell what that other thing is.

After selecting a character or an object in the market, it can take anywhere from 5 seconds to 2 hours to ‘digitize’ in to the game.  You can select to speed it up with diamonds.  I’ll talk about my issues with this soon. 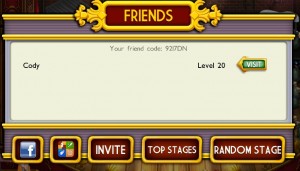 One cool thing you can do is connect through Facebook or that annoying Game Centre that nobody likes, and visit your friends’ stages.  There’s an automatic one there, ‘Cody’, and he’s on Level 20.  I took some screenshots of it, but I think I’d rather hold off and let you guys see for yourselves.  All I’ll say is I’m on level 9 right now, and if I’m halfway to level 20, then a lot’s gonna happen over the next 11 levels. 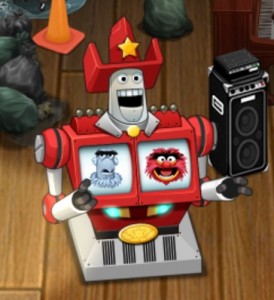 This brings us to Harv-E the Robot.  He’s an agent.  When two Muppet characters reach level 4, they can be selected through Harv.  Harv then, through some weird science that I can’t figure out, puts those two characters together and creates a third!  As I said, I can’t work out the science.  For example, a Snowth is created by mixing Floyd and Animal.  Yeah… 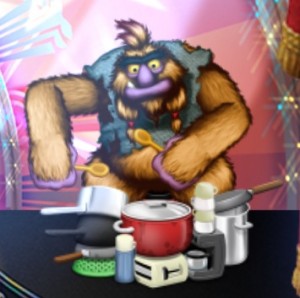 By mixing Sam and Animal, you get a character named ‘Big Mo’, who I swear is modelled off an old Fraggle Rock character.  There are several new characters in this game.  I won’t spoil them for you; you’ll have to play.

I want to point out; this review only scratches the surface.  To review it all properly would mean I’d have to wait for a week or so, until everything was done.   I’ve tried to hit the important points, but if you’ve played this game and I’ve missed anything; whoops. 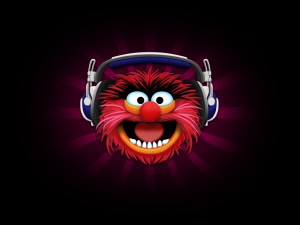 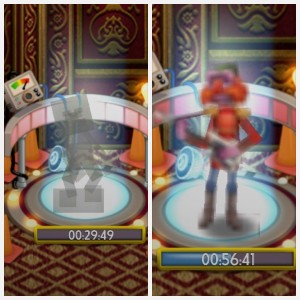 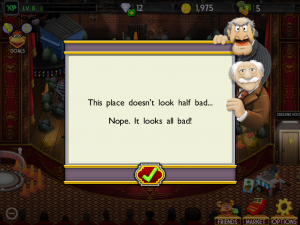 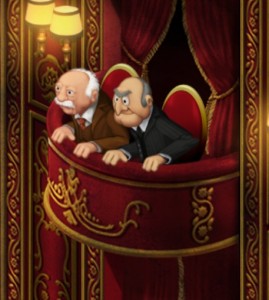 All in all, this app is a no brainer if you have an iPhone or iPad.  It’s free, so why not give it a look (when it eventually comes to your country).  Knowing how some people really got in to ‘Simpsons Tap Out’, I can see this game becoming just as successful.  But I know myself, and I probably won’t end up finishing this game.  Instead, I’ll ignore it for a month, and then delete it.  Then in 7 months I’ll remember it existed, download it, play it for 2 days, then ignore it for a month, then delete it.  I did that with ‘Tap Out’.  Twice.

The app certainly isn’t anything innovative, but it’s fun, it’s silly, and it looks amazing.  Now, I’m gonna go hide under a bean bag chair, because by now Ryan will know I’m here, and he’ll be looking for me.  He’s a scary dude.  Until next time, go follow @MuppetFanProbs. 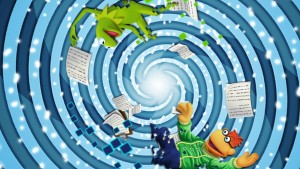 Click here to tap an app on the ToughPigs forum!