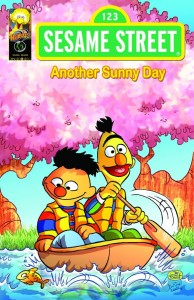 Two years and five months after the first Sesame Street comic book from Ape Entertainment, another issue is finally available RIGHT NOW at your local comic book store.  The digital version will reportedly be available from iTunes, Amazon, and Google Books on November 30th.

“Another Sunny Day” comes with a fun cover featuring best pals Bert and Ernie by Tough Pigs favorite Jay Fosgitt, and it features five stories starring various Sesame Street characters. If I didn’t know any better, I’d say all the stories were deliberately chosen for their focus on working together and cooperation and that kind of junk.

Things get started with the one-page “How to Read a Comic, Part 2.” Readers who have been on the edge of their seats since 2013 to learn more about the proper methods for consuming comic books should be satisfied with Cookie Monster’s big reveal about how to read sound effects.  Although I have to wonder… If a parent read the first “How to Read a Comic” to their three-year-old in 2013, that kid is now five — have they outgrown Sesame Street? 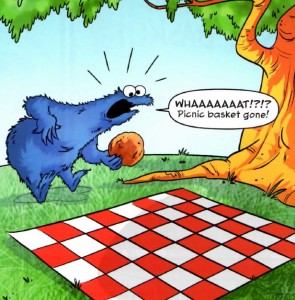 Speaking of Cookie Monster, he’s also the star of “Cookie’s Crumbles,” written by Jason M. Burns with art by Scott Underwood.  The scope of the story is small, but the stakes are incredibly high for Cookie Monster.  His picnic basket is missing!  And you thought the reality-destroying comic book stories Secret Wars and Convergence were dramatic.  Fortunately, a bunch of Cookie’s friends show up, including Bert and Ernie, Herry and Frazzle(!), and even Little Murray Sparkles(!!!).  As happy as I was to see that cat make an appearance, I couldn’t help but feel a very specific pang of Sesame nerd disappointment that he wasn’t accompanied by his old owner Elizabeth.

This story was fairly predictable for a sophisticated media consumer like myself, but I bet kids will have fun following the search for the elusive basket.  Underwood draws some agreeably cartoony Muppets throughout the story, with Cookie Monster especially demonstrating some fantastic facial expressions.

“The Flight Stuff” is a paper airplane-themed Bert and Ernie story by Paul Morrissey with art by Underwood, and it includes a lot of those great sound effects Cookie Monster taught us about in the first feature.  Here are a few of those: FUH-WHOOSH!!  ZIP!!  ZOOM!  SWOOOOP.  HONK!  I’ll stop now so I don’t spoil the story for you. 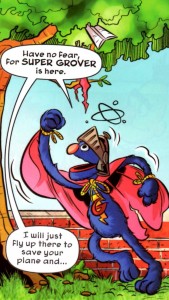 Jason M. Burns returns to write “There’s No I in Super Grover,” which is drawn by Armando Zanker.  I don’t know if it was deliberately planned as a sequel to the previous story, but the premise is based on Ernie having a favorite paper airplane, so I’m going to assume it was.  When Ernie’s favorite paper airplane gets stuck in a tree, can Super Grover save the day? Answer: No, he can’t.  Perhaps not surprisingly.  You’ll never guess which of Ernie and Grover’s friends shows up to retrieve the airplane!  Unless you think for more than one second about who their tallest friend is.  It’s always nice to see original recipe Super Grover, even if the story is only two pages long.

Finally there’s “An Imaginary Lunch” by Jason M. Burns (though the book’s title page lists Paul Morrissey) and artist Rolando Mallada.  In this haunting tale of Abby’s Flying Fairy School, Blogg is startled to find that his lunch bag is moving.  What horrors await him inside the bag?!  Mallada’s art adds a lot to this one, giving the characters texture and earthiness that they lack in their computer-animated incarnation on the show.

Hey, did you notice what character I haven’t mentioned yet?  Believe it or not, Elmo does not appear in this comic book at all.  I don’t have a problem with that little red fellow, but I applaud the Sesame people for releasing something that lets the rest of the ensemble take the spotlight — and gives Bert and Ernie so much to do! 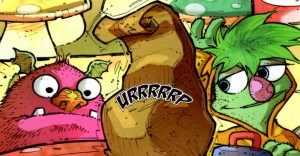 The worst thing about this comic, and the thing that will probably turn off a few potential buyers, is its $3.99 price tag.  But really, that’s just the reality of comic books now.  You get five stories for the money, and if spending a few pleasant minutes reading about Sesame Street Muppets in comic book form interests you at all and it’s worth the price of a latte, you should go ahead and get this thing.

And hopefully we won’t have to wait another two years for the next one!

Click here to search for your picnic basket on the Tough Pigs forum!