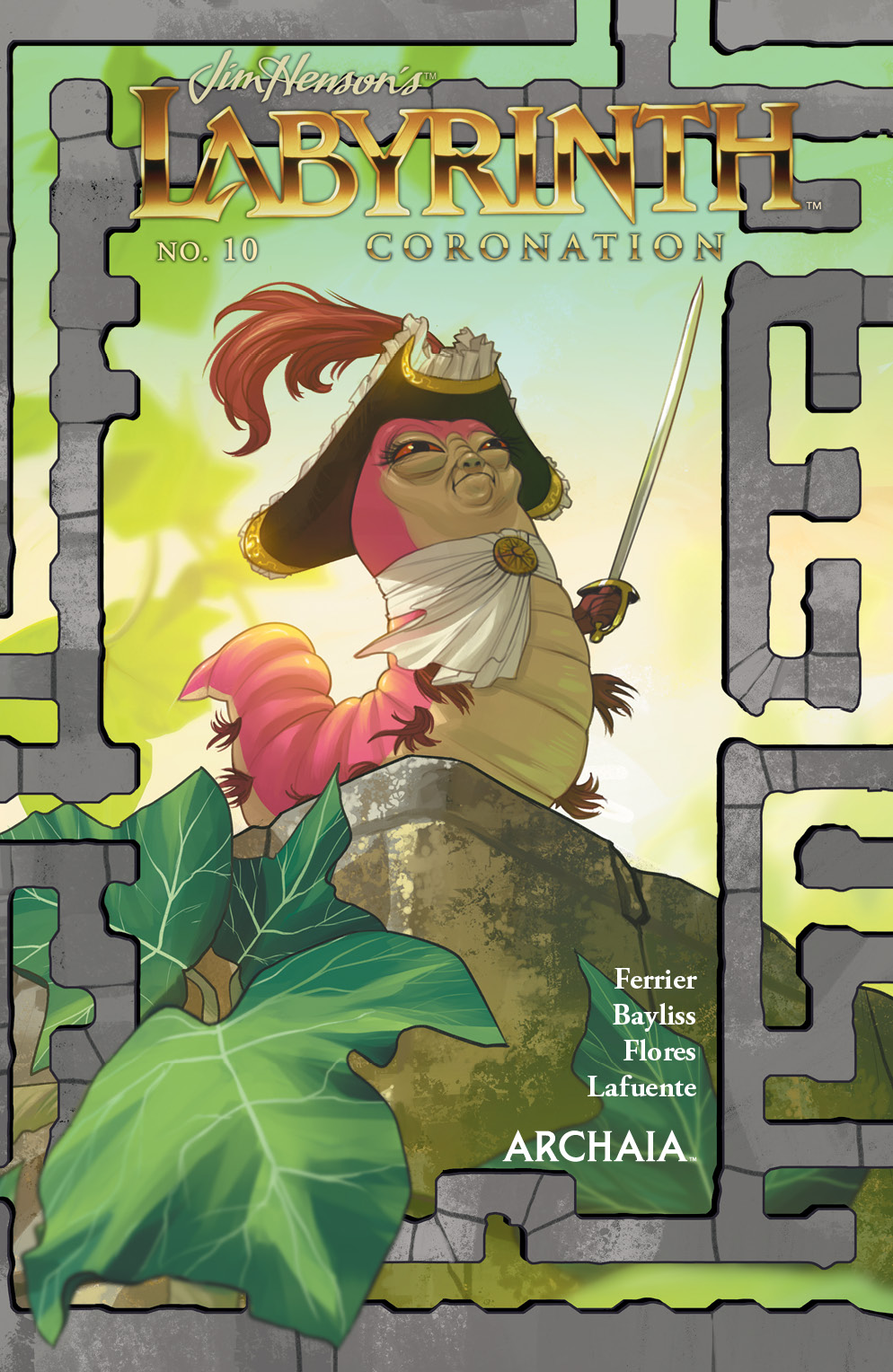 Issue #10 of Archaia’s Labyrinth: Coronation comic book series is in stores TODAY (find your nearest comic book store here!), and is available digitally on Comixology and Amazon. Which means it’s a great time to check in on the series and what’s been going on since our last review!

I’m digging this series, and not just as a new Labyrinth thing, but also as its own story. Most of the beloved characters from the original movie are essentially absent from the comic, but the story of Maria’s journey through the labyrinth, years before Sarah’s, has a life of its own. Even without musical numbers!

Like Sarah, whose progress we occasionally see in the “present-day” framing sequences, Maria has accumulated three strange companions: Skubbin the conflicted bandit with a dark secret, Tangle the talking rose bush who loves hugs, and Cible the headstrong worm who’s itching for a fight. If this were a new story about Hoggle, Ludo and Didymus, I’d be distracted by constantly asking myself “Would Ludo really say that? Is that true to Ambrosius’s character?” like the judgmental nerd I am. But writer Simon Spurrier and scripter Ryan Ferrier have made the new characters compelling and fun to read. Especially Tangle, whose rambling dialogue I hear in a voice resembling a drunk Pete Puma. 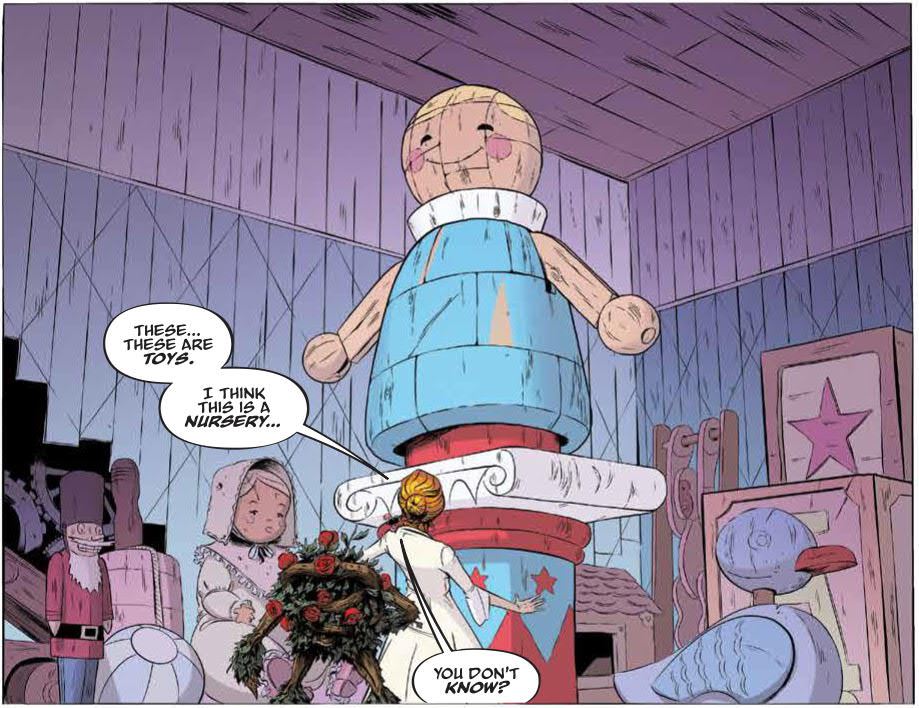 In issues 7 and 8, Maria finds herself trapped in a playroom full of giant toys that turn deadly, and meets an underground militia of goblins who theoretically want to overthrow the Owl King, but are actually more interested in drinking ale. It must be equal parts challenging and fun for the writers of the series to come up with obstacles and creatures for Maria to encounter that feel like they belong in the labyrinth without simply repeating stuff we saw in the movie. So far, so good. The toys are menacing without being too scary, and the goblin rebellion is whimsical and adds texture to the world of the labyrinth.

After Maria learns Skubbin’s secret in issue 8, issue 9 features more startling revelations, and gives Maria her own distracting ballroom fantasy, which we see paralleled with Sarah’s. In this issue, it becomes clear that the mean old Owl King’s plan is not to raise Maria’s baby to become his heir as Goblin King. His true scheme is considerably crueler. Oh, and by the way, the Owl King has built a robot double of Maria’s husband Albert! You may recall that Albert looks just like the adult Jareth in this comic. Wait… Could the Jareth we know from the movie actually be this robot?! Nah. But could he?! Nah. 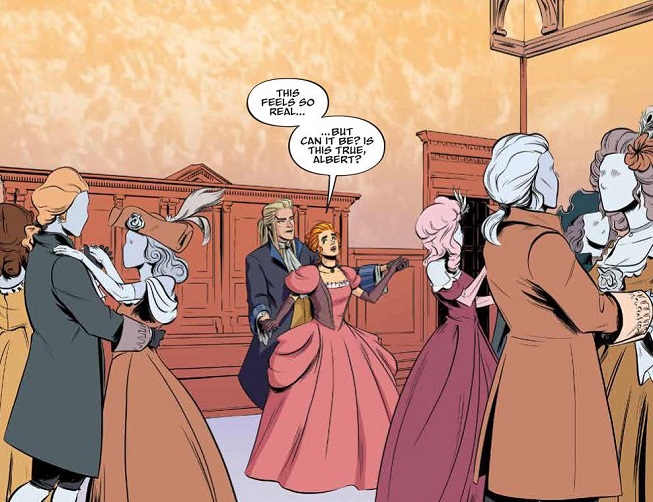 In issue 10, Maria and her friends engage in battle against a goblin army, in a sequence that is reminiscent of the Goblin City scene from the movie, but that ends very differently. By the end of the issue, in the present-day storyline, Sarah has arrived at the castle, where a minor retcon reveals another link between Maria’s quest to save her infant son and Sarah’s quest to save her infant brother.

By the end of #10, Skubbin, Cible, and even Beetleglum (the goblin tasked with taking care of baby Toby) have all gotten their own character arcs alongside Maria’s. The 12-issue comic book format allows the creators to spend a bit more time with each supporting character than in a 100-minute movie, and it pays off. It’s especially remarkable to see how Skubbin develops, considering he was introduced as a goofy failed thief in what seemed like a one-scene joke.

The art by Daniel Bayliss and Irene Flores continues to effectively recall the setting and creatures of Labyrinth without being too strictly limited by it. The goblins look like the goblins of Brian Froud and the Henson Creature Shop, but a little cartoonier, and various other monsters allow the artists to stretch their imaginations further.

Throughout these issues, the series frequently comes back to themes of identity – Maria is forced to redefine herself to survive the labyrinth, Cible endeavors to live up to social expectations, and Skubbin struggles to emerge from the shadow of his past. Even Tangle has to deal with its desire to be a great hugger conflicting with the fact that nobody wants to hug a thorny rose bush. If the dominant theme of Labyrinth the movie is “It’s not easy transitioning from childhood to adulthood,” Labyrinth: Coronation’s dominant theme of “It’s not easy reconciling who people expect you to be with who you really are” complements it nicely.

Hey, wait a minute. That whole idea of people and things not being who they’re expected to be… This whole time we’ve assumed the baby in the story is Jareth. But what if he’s not, and we’re only assuming he is? Can it be that the series will end with Maria successfully rescuing her baby, who turns out to be some other kid who is not David Bowie? If so, who the heck is Jareth, and how does he become the Goblin King? I was joking about that robot thing earlier, but what if I’m right?

And meanwhile, with only two issues left to go in this series, the present-day story has almost reached the moment of Sarah’s confrontation with Jareth. Will it continue on beyond that scene, showing us Jareth’s retreat after his defeat? How will that be paralleled with Maria’s story? At the end of the whole thing, will we realize that Beetleglum was the stealth protagonist all along? And will an epilogue finally reveal whether Sir Didymus ever found anyone to play Scrabble with him?

I’ll be reading along to find out, and if you’re into comics and Labyrinth and fantasy stories, I recommend you do the same. Even without musical numbers!

Click here to hug a thorny rose bush on the Tough Pigs forum!