As of this month, the comic series inspired by Jim Henson’s Labyrinth hits its halfway point.  A part of me is worried that they won’t have enough story to fill 12 whole issues, but the latest two have given me hope that there’s more to mine from Labyrinth than unnecessary origin stories and glorified fan fiction.

“Labyrinth: Coronation” has a few things going in its favor.  It’s not really a story about Jareth or any of the characters we know and love from the film, but instead about Jareth’s mother.  This allows the story to go in just about any direction it wants, as long as Baby Jareth (assuming that’s who the unnamed baby is) eventually crawls his way up to the throne.

But the element I’m mostly interested in is how it finds ways to tie into the film without affecting the original story too much.  If you’ve been following along with the comic, you’ll know that there’s a framing sequence that shows adult Jareth telling his backstory to baby Toby while watching (and sometimes interacting with) Sarah as she goes through the motions of the film.  Much like the short Labyrinth stories from old Free Comic Book Day offerings, this one finds a way to feel important, yet not completely necessary.  Basically, everything a companion series should be. 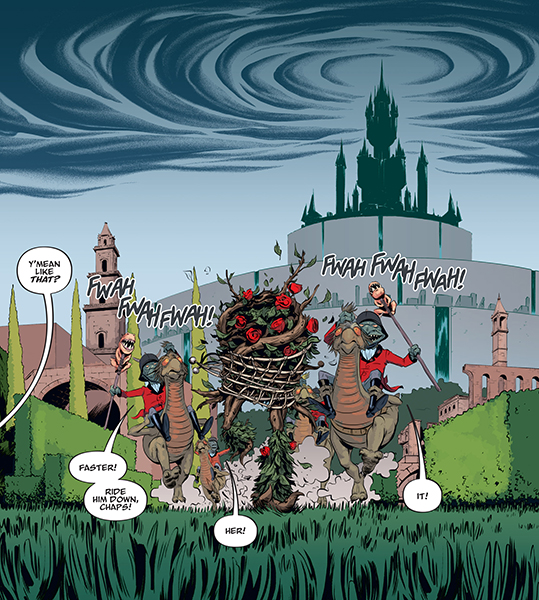 So now the question is, if the series isn’t all that connected to the film, how is it specifically a Labyrinth story?  The latest two issues drive home a few subtle, yet important links, which may or may not answer some pertinent questions raised by the movie.

Now, I’m firmly on record as saying that I believe Sarah’s story in Labyrinth happens all in her head, and that her hero’s journey is a mental one, but not physical.  A fantasy film with an emphasis on “fantasy“.  The main argument for this is Sarah’s bedroom, which has elements from the film like stuffed animals of the characters, a Hoggle bookend, M.C. Escher and Maurice Sendak books, and most damning, photos of David Bowie.  It seemed like too much of a coincidence that these things she has in her world also appear in the Goblin Kingdom.

And yet “Labyrinth: Coronation” begins to explain that maybe the appearance of these things isn’t so random.  The comic follows Maria’s journey into the Labyrinth, and it looks very different from the one in the film.  Previously, we wrote this off as change due to a couple hundred years’ time, but the antagonist, the Owl King, suggests that there’s more to it than this.

In the Owl King’s own words, “the Labyrinth echoes the melodies of her mind”.  He explains that certain things from Maria’s own life and experiences are leaking into this version of the Labyrinth.  For example, there’s an early scene where she paints a mermaid and is told she should paint flowers, and while in the Labyrinth she meets a mermaid and a companion made from a rose bush.  The big difference between Maria and Sarah’s experiences is that Maria actually notices this coincidence.

There’s another big reference to the film in these issues, and it’s so good (yet subtle), I’m hesitant to mention it here at all.  But what the heck, I’m gonna do it!

In the first issue, many readers noticed that Jareth’s father happens to look exactly like the adult Jareth.  That’s not so surprising, what with genetics and all.  Maria, Jareth’s mother, is an accomplished artist.  Several times, she uses chalk to draw an image of her husband on a wall, and in one case she sculpts his bust in stone, which breaks into segments soon after.  Those images and broken stones?  They’re all in the movie, as we revealed here on ToughPigs a few years ago.

Crazy, right??  There was a Labyrinth mystery right under our noses and we didn’t even know how to ask the question, let alone that an answer might be possible.

Anyway, there’s a lot more to these issues than that – a Worm family, zombie Goblins, and reality-shaping chalk keep the story going, and I for one am excited to see what the second half of this series holds.