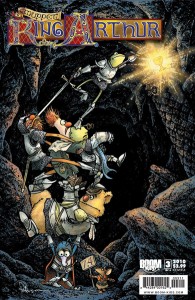 When we last left King Arthur, he had his sword and he gathered his motley crew of knights. So what’s left for him to do other than find some sort of quest? That’s what a good monarch does: he leaves his responsibilities behind while he follows something shiny. I mean, that’s why we’ve got troops in Iraq, right? (Topical!)

In the third issue of Muppet King Arthur, our kingly frog leader is growing bored with ignoring the plights of his people, so he takes his buddies on a vacation to find the Holy Grail. Along the way, they run into (you guessed it!) more familiar Muppets, including a Doctor, a Gofer, and a King. Meanwhile, Piggy/Morgana Le Fay finds a reason to be evil, and (as always) Robin feels completely overlooked (perhaps a rousing chorus of “Just One Person” is in order?). 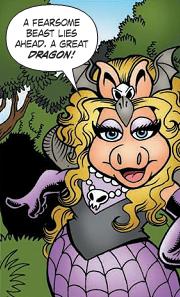 The humor in this issue, brought to us by writers Paul Benjamin and Patrick Storck, stays just as consistent as their first. In particular, I enjoyed how they’ve been doling out the running gags, which are funny but not overused. The characters are so well-written and familiar, it almost feels like they’re copying dialog from The Muppet Show. My favorite bit of the issue is a “Knock-Knock” joke well-executed by Fozzie Bear. Yeah, you heard me right. Fozzie and a funny knock-knock joke. If that’s not worth your $2.99, I don’t know what is.

Since the main cast was nailed down last issue, each character has their own little chance to shine. Aside from Kermit and Piggy, Fozzie gets the most screen time, and a lot of genuinely funny bits (even when he’s only seen in the background). Even Bunsen and Link remind us why they were chosen for King Arthur’s elite squad. I’m hoping that next issue we’ll see more of characters like Gonzo and Rowlf, who had great introductions but are mostly seen in group settings in this issue. 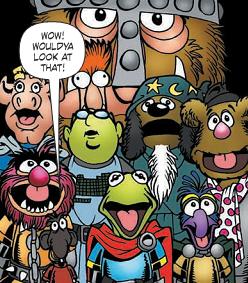 James Silvani’s art also remains high in quality. Though we were spoiled last issue, in which he was allowed to draw audiences filled with new Muppet characters. Instead, since our heroes are on the road for most of the story, we don’t get nearly as many in-jokes and surprise cameos. While I still believe that some of his character designs are a little bit too simple, they lend themselves to a greater degree of expression, so it doesn’t look strange when Fozzie has an embarrassed look on his face, or when Miss Piggy seethes with unfurled rage. His style has a good mix of cartoony playfulness while staying loyal to the essence of each character.

In the end, Muppet King Arthur is good old fashioned fun. And that’s all we ask from both a Muppet story and a comic book. 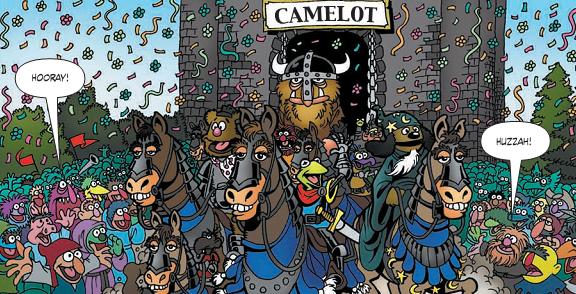