Just weeks ago, the Muppets got launched head-first into the extreme mini golf world of “Holey Moley.” And when I reviewed the season premiere back at the beginning of May, I said that despite a shaky start, there was still potential for these two properties to have a harmonious relationship and surprise us all. Now, we’re eight episodes in, and the nebulous possibilities have begun to clarify. (And that’s typically when you take your clarified possibilities and add them to a half-cup of confectioner’s sugar, a heavy pour of optimism, two cups of heavy cream, about a third of a pound of hindsight, and a pinch of salt to make a quick and easy future-flavored frosting.)

With the show off this week on ABC, I thought this would be the perfect time to reflect on what we’ve seen so far in a sort of halftime report. And then I found out that the season is only ten episodes long, so we’re way past halftime. But I’ve got a bowl full of future frosting, and it isn’t going to serve itself, so let’s dig in.

When we last left co-announcer Rob Riggle, he had made a secret arrangement with Pepé the King Prawn to get the show renewed for another season “by any means necessary.” The following week, we learned that the prawn’s means were to kidnap the show’s executive producer and basketball superstar Stephen Curry* and hold him for ransom, thinking the network would pay them a lot of “monies.” Not realizing that this is what the Muppets do when there’s a desperate need for money, Riggle is mortified, and tries to convince Pepé to let him go. The whole plan goes up in smoke in the fourth episode, when Pepé and Curry become good friends and develop a TV pilot for a cop show starring the two of them called “Yummy Curry Prawns.” The hostage plan ends, and in their negotiations to get “Yummy Curry Prawns” on the air with ABC, they decide to tell the network that Riggle engineered the whole plot. Does Riggle face any consequences? None that we’ve seen so far, thank you for rhetorically asking! In fact, Curry does return to the show, taking up his role from seasons past where he explains the thought process behind some of the courses.

Instead, the Muppet subplots seem to come in multi-episode movements, none of them really connecting with one another. Next, Riggle decides that the show may have better odds at survival if his co-announcer, Joe Tessitore, is replaced by a Muppet. First, he asks Kermit to take over on a phone call, but in keeping with a recent rash of wishy-washiness, he decides after he’s hung up that he won’t do it. But to keep Rob happy, he does audition several Muppets for the job, including Sam the Eagle, Bobo, and Joe the Legal Weasel (who notes that they wouldn’t even have to change the first name on the dressing room door). Of course, none of them go well, so Kermit decides that he won’t betray Tessitore, and instead attempts to broker peace by helping them announce a hole in episode seven. And as yet, that’s the only time a Muppet has actually had something to do with the meat of the show. You know, the actual mini golf.

In the most recent episode, Rob focuses his attention on recruiting Miss Piggy to appear in the series finale, visibly showing his affection for her. And by this point, I’ve gotten the sinking feeling that in the process of bringing the Muppets to this show, something got lost in translation. As I pointed out in my first review, the interstitial bits have never really played into the main action, but this feels especially disconnected. In fact, not too long ago I came to a very dark realization: this is starting to feel like “Lady Gaga & the Muppets’ Holiday Spectacular” all over again. There’s enough Muppets to make it feel juuuuuust enough like a Muppet project, but it feels like the ensemble was an afterthought. The potential I admired in the season premiere is running out quicker than contestants have to run to stay on the spinning moon on Full Mooney.

So, with two episodes left in the season, how can this be saved? If I can play armchair producer for a moment, I may have a radical solution: less Muppets. And once you’ve wiped the drink that I assume you just spat at your screen, I’ll explain. If you’re going to make the Muppets such a big feature of the show, you need to make them costars, and not just in the billing and the very persistent marketing. They need to be fully integrated into the show and treated as equals. We should be seeing Fozzie Bear, Uncle Deadly, Beauregard and the like on the courses, interacting with contestants and commentators, every week. Don’t shoehorn the Muppets into a subplot, especially if there isn’t a plan. We shouldn’t be jumping from plot to plot each week. They’ve been around for decades and can carry a show on their own. They deserve better. So when I say “less Muppets,” I suppose I really mean “make a commitment, one way or the other.” “Holey Moley” is great. The Muppets are great. But if you’re not really ready to mash them up, what’s the point of having them together at all?

But for all my complaints, strangely enough, I still have a little bit of hope. There are still two episodes left, which means that there’s still time to right the ship and close this out strong. It’s been teased that the Muppets will finally have their moment of glory on “The Distractor” in the final episode. Basically, the course is a simple putt, but in the golfers’ way is some sort of performance or celebrity doing something silly to try and throw them off their game. Perhaps we’ll get a mini version of “The Muppet Show?” That might make up somewhat for all the frustration I’ve experienced. Or for the final round, with a quarter of a million dollars on the line, maybe an entirely Muppet-themed hole? For hardcore Muppet fans with only a casual interest in ridiculous physical challenges for what’s generally an uncomplicated sport, it may be worth tuning in for the last episode. After all, as both Rowlf and Kermit sang, it’s not where you start, it’s where you finish, and the Muppets definitely know how to stick the landing. But right now, all I’ve gotten is a season of frustration, and a cute bit where Lew Zealand throws Kermit like one of his boomerang fish. That was pretty good.

*And 2022 NBA champion! Congrats, Stephen! And sorry about the kidnapping.

Click here to demand a full season of “Yummy Curry Prawns” on the ToughPigs forum! 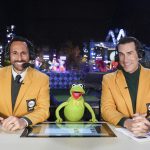