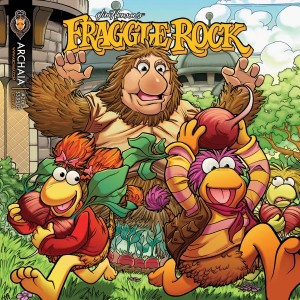 After every issue of the Fraggle Rock comic book that we’ve gotten so far, I’ve said to myself, “Joe, you are one handsome devil. Also, wouldn’t it be great if we didn’t have to wait an entire month before the next issue??” And lucky me, both of those things came true!

After only one measly week, Fraggle Rock v.2 #2 is out in stores. And with all the fanboys flooding the comic book store gates to find out which member of the Fantastic Four is going to kick the bucket, there’s bound to be a lot of nerds picking this one up (including yours truly).

The issue contains another three stories, kicking off with “”The Meaning of Life”, written by Joe LeFavi and illustrated by Heidi Arnhold. The story involves the Fraggle Five searching for the Meaning of Life. No, really. It turns out that the Meaning of Life is in a cave somewhere, and no Fraggle has ever made the journey and survived! Well, no Fraggle had ever made the journey at all. So of course, Gobo being Gobo, he heads off in search of everlasting truth, Wembley follows him because of his invisible tether to Gobo, Red follows suit so she can claim some of the glory, Mokey tags along to gather inspiration for some artsy-fartsy reason, and Boober’s reason for going had something to do with laundry, I think. 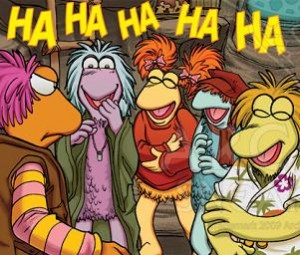 Fraggle Rock the TV show had several episodes like this, where the gang would spelunk into the abyss in the name of adventure/friendship/competition/curiosity/laundry and return with a newfound philosophy on life, but it still feels original every time. The fun part about this version of the tale is that the Fraggles have to travel through lots of familiar caves, all of which harken back to memorable episodes of the show. So you’ll see the Singing Cave, the Crystal Caverns, and more. Speaking of “more”, I’ll touch on this point again in a minute.

Heidi Arnhold does a great job at capturing the likenesses of the Fraggles, illustrating them more on-model than most artists. Some of them tend to look a little chubbier than their puppety counterparts at times, but it’s hardly noticeable. She also manages to bring a lot of emotion to their faces, notably Red and Wembley, who I’m sure are difficult to draw considering they have no eyelids.

The downside to this story is that Gobo takes a break for a page to read a postcard from his Uncle Traveling Matt. Not that I’m against a postcard break, but it shows Matt boarding a city subway, which he did in the episode “Boober Rock“. I know, I’m nitpicking, but I’m allowed. I run a Muppet fan site.

Story number two (in issue number two of volume number two) is “The Fraggle Who Cried Monster”, written by Jason M. Burns and illustrated by Chandra Free. After a spooooooky (and kinda generic) ghost story around a campfire (is building a fire really a good idea when you live underground?), Boober freaks out and starts seeing monsters under his bed. And not the cookie-eating kind! Cue the patented Dave Goelz panicked scream!

Of course, there are no monsters in Boober’s room, but the truth is far more interesting. In fact, the climax involves yet another callback to a memorable Fraggle Rock episode (one which, because I am a sympathetic host, will not be spoiled in this review). And hey, remember when I said I’d come back to that one point? Well, I’m gonna come back to that in another minute.

Artist Chandra Free takes a very different approach than the other artists in this book, opting to illustrate the characters in a much more cartoony fashion, with colors that seem very earthy, yet manage to pop off the page. I honestly can’t think of a better way to draw this story, since it’s mainly about over-the-top panic, creepy monsters, and Boober, who is the least expressive (physically) of any of the Fraggles. I also enjoyed the way the panels are separated, making each page look like the wall of a Fraggle cave. I really like Free’s take on the characters, and I’d love to see her tackle a longer story.

The final story is “The Perfect Words”, written by Tim Beedle and illustrated by Ross Campbell. This one is Mokey-centric, and delves into her creative process (and her subsequent discombobulation) when trying to write a poem about her friends. It’s a cute story, and it’s nice to see a Mokey spotlight that doesn’t involve her just wearing rose-colored glasses and ignoring the plights of those around her.

Once again, I won’t spoil the ending to this story, but I was once again pleased (and surprised) to see more references to past episodes of the show! This entire issue was like a love letter to the series, not just as a whole, but as individual moments that we fans fell in love with. All three stories were chock-full of them, and yet none were so strong that the story couldn’t work without prior knowledge. It was the perfect balance of continuity and originality. And hey, remember that thing I kept saying I’d come back to? This paragraph was it.

Ross Campbell’s art style works really well for this story, although there’s something about it that makes the Fraggles look like tween versions of themselves (think Muppet Kids). It might be the oversized eyes or Red’s giant pigtails or Wembley’s diminished nose, but they seem small (which really is something when you’re talking about Fraggles). I did enjoy Campbell’s Mokey, who goes from serene to frazzled and back again over the course of the story. She seems almost alive, which is possibly the greatest homage an artist can give to the Fraggles.

Finally, Katie Cook brings us another activity page. This time, she teaches us how to draw Fraggles and Doozers with just our fingerprints! I’m gonna try it the next time I get arrested!

The best thing about the Fraggle Rock comics is that each one is better than the last. I’m consistently surprised as to how they never talk down to the audience, they never make the humor too highbrow, and they show a deep, sincere respect for the fans. And they do all of this while illustrating their stories with fantastic and brilliant artwork, any of which I’d be proud to hang on my wall. I honestly can’t think of a better companion to the TV show than this.

Click here to visit the Crystal Caverns by way of the ToughPigs forum!