So here it is. The last-ever issue of Roger Langridge’s Muppet Show Comic Book. We were fortunate enough to get this one last arc after an absence of nearly two years. But now it’s all over, with an issue appropriately named “Winter.” Yes, friends – now is the winter of our Muppet-comic-reading days.

While I would have happily bought Langridge-penned Muppet comics every month for the rest of my life, part of me really likes that this is the final issue. This was the perfect time to do it. Like Matt mentioned in his review of the Summer issue, these comics are closer to being a sixth season of The Muppet Show than anything else the Muppets have done since 1981. And this is the 24th issue that Langridge has written, which means that “season six” has exactly the same number of installments as the five actual seasons. That’s perfect! That’s stupendous! That fills me with delight!

You know what else fills me with delight? Christmas! That’s right, faithful readers – not only is this another hilarious Muppet Show comic, it’s a hilarious Muppet Show comic about Christmas (and make no mistake, despite being called “Winter,” this is a Christmas issue through and through.) Some people might argue that there are enough Muppet Christmas specials, and there’s no need for them to ever revisit the holiday. 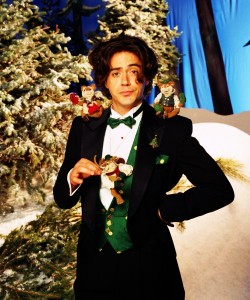 While I understand and respect that position, I also think it’s stupid and hate it a lot. I’m always up for more Muppet-y Christmas material. I don’t always succeed, but each December I try to watch every single Christmas production they’ve done, even the terrible ones like Mr. Willowby’s Christmas Tree and Letters to Santa. So, naturally, I couldn’t wait to see what Langridge would do with the characters in a holiday setting.

But does this issue fill me with delight? Does it stand alongside the others as a worthy addition to the Muppet canon? Yes, of course it does! By combining the regular format of the series with a December setting, Langridge gets to explore what a Christmas show looks like at the Muppet theater, which is something that we’ve never really seen. There are no Christmas-themed episodes of TMS, and the only holiday special set in the theater is It’s a Very Merry Muppet Christmas Movie. That movie gave us a fine glimpse backstage, but the format of both the on-stage show and the movie’s alternate-universe-heavy plot were very far removed from The Muppet Show itself. 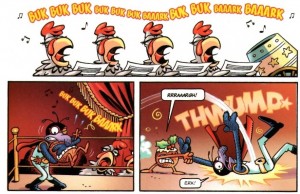 That’s not the case here. Why, right there on the splash page, Crazy Harry lights a giant mistletoe bomb! That’s a new, funny idea, but it feels exactly like the kind of thing that would happen during a Muppet Show performance. I can’t imagine a better way to get into the Christmas spirit.

The issue has the usual complement of hilarious sketches – the Swedish Chef tries to capture a runaway Christmas pudding*, that same pudding comes back to wrestle with Gonzo with the chickens cluck “Good King Wenceslas,” Sam the Eagle conducts a reading of “Twas the Night Before Christmas,” and the Swinetrek crew has a run-in with space Santa Claus. All of them made me laugh, and the wrestling sequence in particular feels remarkably like a TV sketch. Langridge’s skill for capturing that TMS staging will be one of the things I miss most, so I’m glad we got such a fine example of it in this issue. He also, as always, add touches that would be impossible to execute with the puppets, such as a snowball fight where most of the participants would have rod hands.

(*A cursory Google search reveals that a Christmas pudding, in England, is a firmer, more cake-like dessert than the pudding familiar to an ugly American such as myself. The creature Langridge draws here looks more like a piece of fruit – maybe a large, hairy orange – but at least now I know why “a pudding” is a solid object instead of a globby mass. My apologies to our British and/or educated readers for whom this aside is unnecessary.)

The backstage story is ostensibly about a Secret Santa gift exchange, but it mostly serves as an issue-long build-up for the final line of the closing number. It’s a good gag, to be sure, but the real focus of the backstage plot is on the characters’ relationships with one another as they try to find gifts. It serves as one last wonderful reminder of how well Langridge knows these characters. Piggy and Kermit share a sweet, funny story. Fozzie runs around asking everyone for help coming up with holiday gags. Gonzo and Rizzo get to recapture that old chemistry, which we’ve hardly seen in the last decade outside of this comic book. Langridge even briefly revives an odd pairing last seen in The Muppets at Walt Disney World.

My only major complaint with the issue has nothing to do with Langridge – it’s the cover by Elisabetta Melaranci and Gianluca Barone. I haven’t been crazy about any of the covers for these Marvel issues, which generally feature on-model but bland renditions of the characters with none of the charm or life of Langridge’s cartoonier versions. This one makes a much worse mistake, as it features a tall, slender, Kermit-eyed Robin (a character who doesn’t actually appear inside). Right away I thought there were accidentally two Kermits, but nope, it’s a mutant Robin for some reason.

So don’t judge this book by its cover – buy it as soon as possible, and pick up those other twenty-three if you haven’t yet. I can’t imagine any Muppet fan not enjoying them. 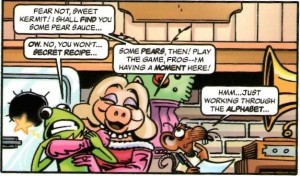