In 2009, Roger Langridge started writing what could be considered an unofficial 6th season of The Muppet Show. It wasn’t exactly like the original five seasons in every way. There were no celebrities of the day appearing every episode (i.e. issue), not for lack of desire but because likeness rights to draw a real person into a comic book are pretty expensive. And while we could hear the music in our heads while reading it, the medium didn’t allow for audio, or moving images for that matter. We had to use our imaginations a little. And yeah, the characters were slightly off-model, illustrated in Langridge’s own style rather than looking exactly like puppets. But everything else was there. The characters were just as lively and entertaining as ever and their personalities were intact. Fozzie was still trying to make us laugh, sometimes alphabetically. Piggy was still karate chopping in fits of jealousy while trying to maintain (or steal) the spotlight. Gonzo was still doing dares of derring-do. And Kermit was still trying to keep it all together, with the occasional arm flailing flip-out. And while they didn’t always stay in the Muppet Theater, they were always the Muppets. 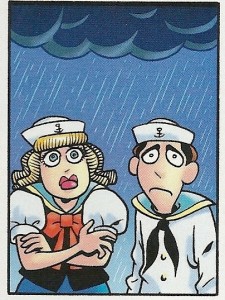 Leaving the theater behind to tell a story happened more often in The Muppet Show Comic Book than it ever did on The Muppet Show proper (They only did that once, for Loretta Lynn’s episode.). The change of scenery is much less expensive to do in comic book form and gives Langridge a chance to draw new backgrounds for the Muppets to explore. This is especially beneficial for “The Four Seasons” arc. While last month’s Spring story could get away with a “Spring means love is in the air” conceit, Summer doesn’t have a distinct feeling you can easily grasp without seeing a beach and swimming and sandcastles and all the hoopla that goes along with summer. As we join them, the Muppets are loading up the bus for “The Muppet Show Beach Party Extravaganza,” which is worlds better than “Muppet Beach Party” (GO ON! THAT’S RIGHT!). There’s your usual beach-type activity: Animal is drumming on seashells; everyone is wearing Hawaiian shirts and bathing suits (Even Kermit. A frog. Wearing a one-piece bathing suit. A frog.); Gonzo is battling a giant octopus no one else seems to notice. Your standard beach activities. Then after an inexplicably blonde Wanda sings with Wayne, it starts to rain. And man, nothing ruins a day at the beach quite like rain. Except for snow. And in two pages the rain quickly turns to snow for no reason. No one seems to mind that global warming has just been proven and they are facing The Day After Tomorrow – Today! Why did it start snowing? What kind of black magic beach did they drive to? No one says a word about it, just that the closing number “Let The Sun Shine In” (Note: Not The 5th Dimension’s “Aquarius/Let The Sunshine In” from Hair as I’m sure many people, like me, thought.) is going to be ruined. 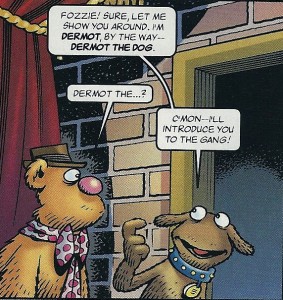 Meanwhile, Fozzie has been invited to perform for the summer at The Whatnot Theater. Here he is introduced to Dermot the Dog and other funny take-offs of our usual gang, including a giant carrot who plays “SPOONS! SPOOOOONS!” Now I’m a pretty smart guy, so I got that Animal’s pastiche was supposed to be Vegetable, but there’s no way a kid reading this story would get that on their own. There are little sprinkles of things like this that bothered me in reading this issue. I’m still not sure if this story was sent to Italy and translated into Italian, then re-translated from that back into English for this reprint, but little bits and pieces of this book don’t add up. For example, Janice’s first line on page one is “ Hey, everyone, like … the bus is here?” Why is that a question? Obviously the bus is there, Kermit just announced it and you’re all on your way to board it. Nothing about this line is distinctly Janice aside from the use of “like” and yeah, she’s a hippie, but she’s usually more observant. There’s also the fact that some of Rizzo’s line don’t exactly gel, and the spaces and pauses in some of the songs don’t work. You have to know inherently where to put the cadence to make them musical.

Anyway, Fozzie’s B-plot wraps itself up nicely and he returns to the gang soon after leaving. After the sudden plummet in temperature affects Gonzo’s stunt and Kermit’s song, it’s suddenly bright and sunny again, with no explanation there either. The Pigs in Space costumes are back to their regularly scheduled colors and the gang puts on their original number with penguins, who were there to fill in when it was snowing mere moments ago. Lastly, and beautifully, Fozzie and Kermit end the issue with a heartfelt exchange as they walk off into the sunset. 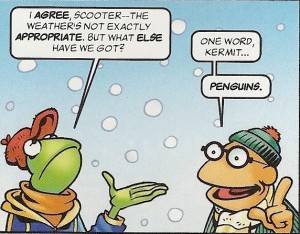 If this is the 6th season of The Muppet Show, the comic book at this point reminds me of shows like Firefly or Wonderfalls. These are both shows that were cancelled before they aired all of their episodes but had a chance to finish their arcs on DVD. These last few issues are the ends of an era and I’m shamelessly gobbling them up. But with the space between the announcement that they existed and finally reading them, as well as the possible language barriers they had to overcome, not to mention the big-screen adaptation of what equated to an episode of The Muppet Show we were given last year, it allowed me to appreciate these stories more because I remembered how much Langridge understood the Muppets from the get-go and let them be themselves just as they were from 1976 to 1981. When I think of my favorite segment, Kermit’s “The Ol’ Swimming Hole,” I liked the sweet tune the most because it harkened back to “The Pond Where I Was Born,” the sweet tune he sang in the very first issue. Langridge had clearly moved forward and developed the characters, letting them grow a little while staying true to themselves and express why they love being a part of the Muppet troupe. And that reminds me of why I love the Muppets. If you haven’t picked up this issue, or last month’s, I wouldn’t hesitate for a moment to tell you to do so. If there is never another issue of The Muppet Show Comic Book, and truthfully I hope there never is unless Roger Langridge writes it, they are ending just as strongly as they started.

Click here to apply sunscreen onto the ToughPigs forum!