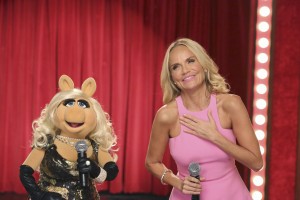 We’re back with another exciting review of the newest installment of The Muppets, “The Ex-Factor,” but first a brief recap:

In this week’s episode, we see Kristin Chenoweth as the guest on Up Late With Miss Piggy, and Denise (Gasp! She’s back! Finally!) is such a huge fan. We learn that it’s Denise’s birthday, but Kermit’s lousy at gift giving. After asking the crew for help and getting lots of faulty suggestions (A scale, Gonzo? Really? And I thought you’d be the perfect boyfriend.), he goes to a Color Me Mine with Scooter – but to no avail. With no other options, Kermit turns to the best gift giver he knows: Piggy herself. Miss Piggy agrees to help, but only if Kermit answers a series of questions about Denise, which flusters the frog to no end.

While this is going on, Chenoweth is off on a road trip with the Electric Mayhem and accidentally stirs up some trouble, which results in the band leaving her in the middle of nowhere. Back in the city, Kermit stalls at a restaurant while waiting on the gift. Piggy finally arrives with – surprise! – the perfect present for Denise. Kermit’s humbled and grateful, until he realizes there’s a switch on the gift that plays his and Piggy’s song. I guess asking your ex to do all the heavy lifting for you isn’t always the wisest decision.

Okay, we’re all caught up now? Excellent, because there are a lot of good things to say about this week’s episode. Let’s dive in.

First let’s talk about Kristin Chenoweth and how perfectly she fit into this show. She is, in my opinion, one of the best guest stars of the series thus far. Compared to Witherspoon last week, who (to me) seemed a bit stiff when interacting with the characters, Chenoweth has so much charisma and enthusiasm every time she’s in a scene. It’s easy to tell when actors are struggling in acting alongside Muppets, and Chenoweth doesn’t even break a sweat. Plus Chenoweth and Piggy as straight up friends? No feud to be seen? Do my eyes deceive me or did we finally get a positive female relationship on this show? At long last! 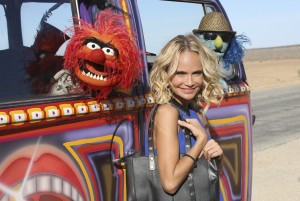 What I really enjoyed about how the episode used Chenoweth (and even Witherspoon last week, I suppose) is that they kept the story line to one guest star. Sure, having multiple guests stars pop up can be enjoyable (I’m looking at you, Laurence Fishburne!), but keeping the focus primarily on the Muppets is always preferable; a single guest star doesn’t steal too much screen time. It was also nice to have Piggy and Chenoweth do a song together, which felt very reminiscent of The Muppet Show. With the karaoke plot and Piggy’s big “I’m Sorry” number from the previous two episodes, it seems like the writers are bringing a little music back to the Muppets, to which I say: Thank goodness. It’s been sorely missed.

The humor of the show thus far has been pretty spot on. One particularly funny scene in “Ex-Factor” is when the gang tries to help Kermit come up with a gift for Denise. Everyone felt perfectly in character: Gonzo’s weird suggestions, Chip’s creepiness, Pepe’s suave advice, and Scooter’s love of something so utterly monotonous (plus his relationship with his mother and his disdain for Ken). Plus every scene featuring the Electric Mayhem was comedy gold; I’d gladly watch a road trip movie about them and Chenoweth any day.

Hey! Remember Denise? That new Muppet everyone was getting all up in arms about for stealing Kermit from Piggy, and then she was only in one episode and we haven’t seen her since? Well, she’s back! Denise’s first episode left a sort of “meh” feeling with most fans. We didn’t really get to know her and she didn’t have much of a personality outside the realm of “Kermit’s girlfriend.” This episode, however, gave us a vast improvement on her character. We see now that she’s smart, loves her job, grounded, endearing, and a fan girl. Not to mention she got a chance to actually be funny. Her screaming “YOLO!” as she runs up to gush over Chenoweth was one of the highlights of the episode for me. I can only hope we see much more of this Denise in the future. 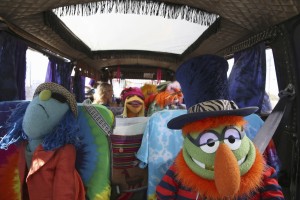 I was glad that we finally got an episode that wasn’t entirely centered around Miss Piggy or Fozzie. The bear was completely absent from “Ex-Factor”, and while Piggy was present she wasn’t the central focus of her plot (Jacobson’s been killing it, no doubt, but it was nice to take a step back from both characters). What’s more, we got to see a nicer side of Piggy, which has been much needed on The Muppets.

Then there’s Uncle Deadly, who continues to steal the show with his hilarious one liners (“I don’t present solutions, just dramatic problems”), and having an entire subplot dedicated to the Electric Mayhem was a treat. This is the kind of thing I’d like to see more of: all the Muppets getting some screen time here or there. I hope more future episodes allow characters to shine, as this one did with the Electric Mayhem and Scooter. Speaking of Scooter! That guy’s been taking the cake for me almost every week. In this episode he had so many great moments, from his obsession with Color Me Mine to his “Put on a robe, Ken” line. Scooter really hasn’t had much of a character since Richard’s passing in 1992, so I’m pleased to see his personality taking on new shape and form.

Then there’s my favorite facet of this episode: it features so. many. ladies!

Janice! Piggy! Yolanda! Denise! Chenoweth! Cheryl! … Okay, that’s really it, which is sort of sad when you consider the ratio of male vs. female characters, but hey, compared to previous episodes it certainly had a strong presence of the F word… that’s right, guys. Feminism. 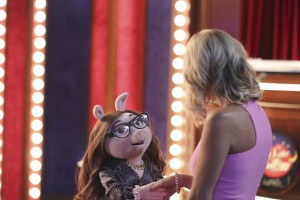 As already stated, Piggy and Chenoweth have an overall positive relationship with one another, and we get to see Denise gush to Chenoweth about how amazing she is (to which she calls Denise “sweet”). There was also Yolanda being great (if not disgruntled) at her job, along with Janice claiming that she’s “not anybody’s lady” (not even her own!). We get a couple instances of female characters interacting amiably with one another, something that is all too rare when it comes to the Muppets.

I mean, look at Piggy. Not only is she friendly to Chenoweth, but she actually follows through and gets Denise a nice gift. In fact, even in brainstorming with Kermit, she’s never actually all that mean. The switch inside the jewelry box isn’t even really a jab at Denise, more of a “don’t-ask-your-ex-for-help-in-these-matters” note to Kermit – and she’s not entirely wrong on that front. It’s nice to see a more helpful, less self-centered Piggy. Should she still be a diva? Absolutely, but keeping her as a three dimensional character is also important.

Alright, so those were all my pros. What about the cons?

There’s been many mentions of how this show is, well, a bit mean spirited at times. I feel like this episode was a step in the right direction; no one really seemed upset to be doing their job (except maybe Yolanda?) and everyone happily banded together to give Kermit advice. There is the Electric Mayhem debacle, but it’s heavily coated with humor and resolved relatively quickly. My main qualm was that Kermit didn’t come clean to Denise about getting help – that seemed a bit out of character for the frog to take all the credit. The show is still lacking a certain amount of heart that we’ve come to associate with the Muppets, but again, I think they’re headed in the right direction.

Mostly, the show is still working out the kinks of doing an Office-style sitcom that caters towards a non-human cast. Could you take all the Muppets out of this week’s episode and replace them with humans and have it still work? Probably. This, perhaps, comes from placing the Muppets in “the real world.” The writers seem to be saying that there’s no place in this new show for singing vegetables, whatevers eating tires, houses telling corny jokes, and so on and so forth, but those elements are the ones, I think, most of us really miss. I’d like to see them add in more muppetational aspects to the show while still keeping it in a real-life setting. Call me crazy, but I think it can be done. 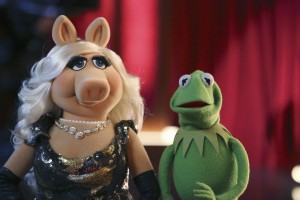 Best Joke: Scooter’s presence at the Color Me Mine paralleling the familiarity of being a bar regular. Also: him not being able to come up with something you could paint with the color orange (Scooter being 100% orange).

Lamest Joke: Miss Piggy buying Queen Elizabeth a GoPro didn’t really land with me. It wasn’t an eye roller but there was definitely potential for a funnier bit.

Best One Liner: “The only thing I have to give her is a punch card from Cinnabon, and I’m still seven Cinnabons away from a free Bon. That’s not a gift! That’s a burden!”

MVP (Muppet Valuable Player): A lot of Muppets shone in this episode, but I’m throwing my hat in Denise’s ring. Sure, she didn’t have a lot of screen time, but I’ve really been won over by her. It’s nice to know she’s not just a duplicate of Miss Piggy – she’s her own woman (just like Janice)!

Song Watch: “I Could Have Danced All Night” and “Sunshine of My Life”.

Obscure Character Watch: Lips having lines is so wonderful!

Adultiest Content: A tie between Floyd’s Tinder account and Pepe wanting to meet Cheryl by the whoopsie bin.

One More Thing: Make sure to keep an eye open for all the avid Muppet shippers writing Floyd/Janice/Dr. Teeth love triangle fan fiction. I guarantee you that it will be a thing.  (And what, did they forget about the Janice/Zoot pairing? Zoot probably did.)

Okay, One More One More Thing: Did anybody else catch that “Jungle Boogie” mention? I certainly did. 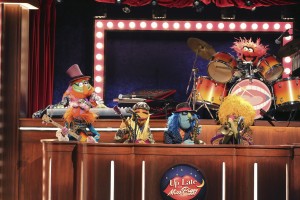 Click here to dance all night on the Tough Pigs forum!

The Muppets Episode 8: Too Hot to Handler – Review

The Muppets Episode 13: Got Silk? – Review