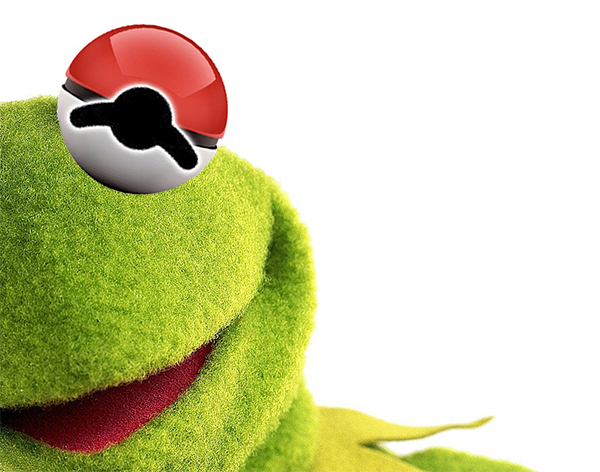 Yesterday we blew geeky minds everywhere by assigning Muppet counterparts to the first half of the original 151 Pokémon!  Naturally, since it would be cruel to just stop part-way, we’re here with the rest of our Muppet/Pokémon picks.

Keep on reading to see who we chose for faves like Grimer, Voltorb, and the Legendaries!

Sesame Street’s resident horse (and voice of reason) is on fire, much like Ponyta.

Paul Revere is only superior to Buster in height (or, leg length, I guess?), just like Rapidash’s superiority over Ponyta in flammability.

Look, we all love Beauregard, he’s great, but he’s not exactly the fastest Muppet in the thinking department.  Slowbro can only take you as far as the lobby.

How many times has Beaker been severely injured due to an insane magnet experiment?

How many times has Bunsen severely injured Beaker due to one of his brilliant magnet experiments?

You don’t need two heads to find the similarities between these guys.

You don’t need three heads to find the similarities betw- yeah, you see where we’re going with this.

These two have so much in common! They’re both seals! They both love fish! And that’s literally it!

What’s larger than a seal?  A whale! And there’s a Muppet whale! What are the odds???

I wouldn’t be surprised if we learned that Marjory and Muk were distant cousins. Imagine the Christmas cards.

Look at those innocent little cuties. Farley and Shellder are like long-lost bros.

In my headcanon, Mr. Johnson is the future version of Farley, beaten down by the world to become a larger, more disturbing version of his younger self.  Cloyster may have run that same path from his previous form.

Creepy, small-ish ghosts who appear and can show you images of things you didn’t really ask to see. Spooky!

#093 : Haunter – The Ghost of Christmas Present

Have you seen Haunter’s huge smile? He certainly wants you to come in and know him better, man!

Gengar is known to “takes delight in its victim’s terror” – which I can only assume the Ghost of Christmas Yet to Come does as well when they, y’know, show you how you’re going to die.

Nothing would make you feel shorter than standing next to one of these guys!

Cantus’ soothing singing voice is sure to make anyone feel Drowzee! Ba-dum-psst.

Hypno can convince people to do whatever he wants (mostly just putting people to sleep though).

Just imagine a group of Krabby’s wearing little black hats and threatening you with pistols! It’d be so adorable! And deadly. But adorable!

I mean, if Long John Silver was going to have a Pokemon sidekick, you bet it’d most likely be singing, talking Kingler.

Wilkins was a big fan of making things explode, which is pretty much all Voltorb’s got going from it.

Oh, you want an even bigger explosion? Let me try and think of a Muppet who’s made that his entire gimmick.

Both Exeggcute and the Muppaphones are small, round entities who always look like they’re having an awful day.

It’s a good thing Exeggutor doesn’t have hands, or else those poor Exeggcutes would be even more cracked when he’d try to play them for his music!

Those dudes are wild!  And hard to understand!  Probably because of their respective speech impediments and skull muffle.

Marowak throws the bone away, and it comes back to him!

One of the two most renowned fighting Pokemon out there! So if Ernie is Hitmonlee, it only makes sense …

… this Bert would be the Hitmonchan to his Hitmonlee. While they never revert to throwing punches (or kicks?), they do spend a lot of time bickering!

The weirdest Pokemon meets the weirdest Muppet. The long tongue and the long nose are nice parallels to each other.

Statler’s an old man, so of course he sometimes starts coughing up a storm after laughing too hard at his own heckles.

Waldorf can often be see wheezing through each heckle he throws at Fozzie.

A big looming creature who may seem terrifying to smaller creatures but hasn’t reached his full potential yet.

The bigger, tougher versions of their previous form. The Pokemon Wiki calls Rhydon “insensitive,” which is a word I think of for Pa as well.

Both spend a whole lot of time and energy taking care of those around them.

Tangela pretty much looks like something the Swedish Chef would cook. Shoes included.

Even big, scary monsters can be mothers too!

Clifford is the Muppets’ resident catfish, almost like Pokémon’s resident seahorse.  But with sunglasses, so cooler, I guess?

Seaking appeared to me in a dream the other night and told me to mow messages into my front lawn – weird!

When the stars come out, Staryu has a strong connection with all the celestial bodies in the night sky. Emmet Otter… talks a lot about who Pa? Who I guess is kind of a celestial body??

I can’t believe Starmie hocked the family’s tool chest in order to buy fabric for a dress! Starmie’s got too many arms to pull off a dress!

The fact that the most disliked Muppet and Pokemon are a clown and a mime means this was a match made in heaven.

Sir Didymus is more often than not holding a sword, and Scyther has literal swords for hands.

There’s something so natural about these two schmoozers, but at the same time also something so inherently off-putting.

Dr. Teeth can electrify any keyboard he lays hands on.

Yeah, no thanks, I don’t trust all those teeth (and pincers) between the two of them.

Just a couple of bovines, chewing some cud and showing off those horns.

Pepe tries to make a splash in everything he does – with the ladies, with the scheming, with the money making – but we all know splash is the most useless attack there is.

Gyarados is one of the fiercest Pokemon around. Uncle Deadly is also fierce, but more so when it comes to all his snarky jabs.

Giant, gentle creatures anyone would be happy to meet. Ludo friend! Lapras friend!

The Whatnot puppets are continually recycled throughout Muppet history, using the same puppets to take on entirely different personas from episode to episode. Sounds like a version of the shape shifting Ditto to me.

Everyone’s favorite, lovable pups. Who’s a good dog! You are! Yes you are!

Baskerville is basically an altered version of Rowlf, although not quite as underwater-y as Vaporeon.

Afghan Hound is basically an altered version of Rowlf, although not quite as electric as Jolteon.

Jojo is basically an altered version of Rowlf, although not quite as on-fire as Flareon.

To get to know these dudes better you better sharpen up your coding skills.

Just look into Omanyte’s eyes.  That’s the same look of desperation you’d find in the eyes of a songwriter with paralyzing writer’s block.

The smaller version than their evolved forms – plus I bet Kabuto would look equally as adorable with a giant blue bow on its shell.

It’s pretty rare to catch a glimpse of one of these – most people don’t even believe they exist!

Timmy’s big and blue and can probably be found blocking traffic due to his napping in the middle of the street.

That’s right, the Muppets’ big walkaround characters are the Legendary Pokémon!  Starting with Thog as Articuno, mainly because of their specific shade of blue.

Sweetums has a fiery temper no one would ever want to set off! Likewise, don’t step on Moltres’ toes or you’ll get burned!

Even more rare, Forgetful Jones, who once got lost fitting his head into his hat.

The rarest of rare – Bruno – also shares the size and sunny disposition of his Pokémon counterpart, Dragonite.

You don’t want to get on Mewtwo’s bad side. As we learned from the Pokemon movie, he’s got a mean streak and won’t let anyone stand in his way. Sounds like a certain diva pig with one hell of a karate chop.

What are Mew and Annie Sue Pig if not the cuter, smaller, more popular versions of Mewtoo and Miss Piggy?

And that, by our count, is 151 total Pokémon and 151 of their Muppet counterparts!  And now that we’ve been looking at Muppets and Pokémon for so long, we just want a Muppet video game. Or a way to capture Muppets in the wild inside tiny red-and-white balls.  Is that too much to ask?

Click here to join Team Rocket on the ToughPigs forum!

by Julia Gaskill and Joe Hennes