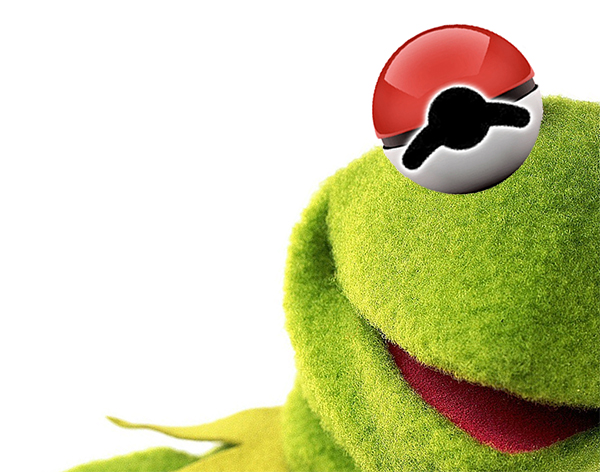 Pokémon is back, baby! Between the Pokémon Go game and the recent Detective Pikachu film, everyone in the world suddenly cares about Charmander and Snorlax and their pals again.  We’re pleased to see a colorful band of misfit animal hybrids in the zeitgeist, despite the fact that we really wish they were Muppets.

But hey, that doesn’t mean we can’t have a little crossover fun!  We decided to jump on that Pokébandwagon and cast each of the original 151 Pokémon as Muppets (or, vice versa, depending on how you look at it).  Each franchise has such a colorful cast of characters, it seemed natural.  Besides, it’s one of those ideas that felt juuuust stupid enough that we had to just go for it.

With 151 Pokémon to sift through, we decided to split them up into two articles, so be sure to head back to ToughPigs soon for the second half!

Robin’s older counterpart (in Muppet Christmas Carol, at least) fits the bill, since he’s just a larger version of his brother.

The absolute epitome of frogs!

Walter has a fiery passion when it comes to all things Muppets.

Scooter is the clear evolution of Walter. He also serves as moral support for the Muppet crew, but he’s been doing it for way longer.

While only existing in the realm of Muppet Babies and comics, I cannot think of a more fiery, fierce final evolution. Don’t mess with Skeeter or you’ll get scorched!

I mean, Wartortle is just a slightly larger, more aggressive looking version of Squirtle, and what is Herry Monster if not that to Grover?

Look how cute Bert is in his little caterpillar costume!  Almost as cute as Caterpie. Almost.

Even caterpillars have to grow up sometime.  Counterpillars, too.

When a caterpillar has reached its full potential, it also gains the ability to play some funky bass.

I know you’ve likely never heard Kakuna’s voice, but I swear, it’s in that same high-pitched, sped-up tone as the Twiddlebugs.

Beedrill is a bee! Maria was also once a bee! You better bee-lieve this match up makes sense!

What do you see when you look at a Pidgey?  A little bird? Exactly.

What’s bigger than a little bird?  A regular-sized bird, I guess.

And what’s bigger than a regular-sized bird?  I think you know the answer to that.

I’m pretty sure Rattata has a sassy New York accent if you listen closely enough.

Just a couple of beefy rats who can put up a bit more of a fight than their previous forms.

Only the cutest penguin is worthy of representing one of the tiniest birds on this list.

What if Winky Pinkerton is just the grown-up version of Gloria Estefan? That’s one of the strangest sentences I’ve written in a long time.

Arbok is also good at frightening away big-time Hollywood agents lost in the swamp.

Perhaps way overrated in comparison to all the other Muppets / Pokemon, but damn if they don’t sell a lot of merchandising!

The way more intense evolutions. They’re still popular and loved, but they definitely don’t move merchandise like their previous forms.

Baby Bear might not be able to make his body into a perfect circle, but I bet he’d try really hard if asked!

Fozzie sure wishes he was covered in spikes to protect himself from hecklers – I mean, enemies.

The gentle, low-key starter of the crew that is a pretty mellow find out in the wild.

The feistier, more abrasive version! Will definitely put up more of a fight!

They’ve seen some stuff! And they need to tell you about it with their words/claws!

Just like the previous mash-up, if you run into these guys in the wild you’ll be utterly delighted.

Be warned, these dudes are scrappy and up for some danger.

Nidoking also doesn’t have a clue what us Silly Creatures are up to!

Vulpix is perhaps the cutest pokemon of them all, so it’s only fitting they’re matched up with the cutest Muppet of all time.

This evolution is bigger, more elegant, and very, very pale in comparison to their predecessors.

She sings, she’s tiny, she’s pink. What else could you want?

Naturally, the superior version of Betty Lou is Prairie Dawn. It’s survival of the pinkest.

Not sure if we could be any more straightforward in our reason for this match up.

The Count loves bats! Golbat is a bat! Bats everywhere!

It’s tragic that the Avocado didn’t get more screentime on The Muppet Show. We wish he was as visible in the wild as Oddish.

The apex of enormous vegetables is both Vileplume and the Six-Foot-Tall Talking Carrot.

Multi-legged insects who are pretty interesting, but no one ever remembers they exist until they’re on screen.

Venonat is furry, with big expressive eyes, and an underlying sense of dread.  Sound familiar?

Venomoth is the king of the monsters, and you can’t get more king-like than Cookie Monster.

Diglett’s a little cutie that seems to have sprouted from nowhere, just like the Baby Koozebanians that were produced from an explosive union.

Do you think the Merdlidops are grown-up versions of the Baby Koozebanians?  Me neither, but it works for this article.

Much like Team Rocket’s sass-cat sidekick, you know Gaffer’s never up to any good.

Gonna be honest, if I saw either Sundance or Persian walking down the street, I’d probably run for my life.

Sam is the clear Psyduck of the Muppets. Everyone is always giving him a pounding headache and leaving him in utter confusion, and so help you if you’re the one to set Sam off.

I’m pretty sure that Betsy Bird’s dance moves would be really effective in a Pokémon battle.

If Sal ever had to call in sick, Mankey could probably fill in for him and Johnny Fiama would never know the difference.

The Muppets’ resident gorilla is likely a not-so-distant relative of Primeape.  Something about the eyes.

Described on the Pokemon Wiki, Growlithe “is a friendly and loyal Pokémon that will fearlessly defend its Trainer and territory from harm.” Sprocket’s whole deal is being loyal to Doc and defending their home from those pesky Fraggles.

Arcanine is a huge, red and white doggo that is big enough for someone to ride on. Sounds like another good boy we all know and love.

Poliwags love being out on the water, as do pirates last time I checked.

Poliwhirl “sweats to keep its skin moist and healthy.” Just looking at Angel Marie, I bet his skin is always moist too. Eww.

Magic and telepathy are kind of both the same things, right? Plus these two are also – surprise! – very cute.

A step up in the magic/telepathy department. Plus I heard Kadabra loves peanut butter sandwiches!

When googling the word ‘Svengali’ you get this definition: “A person who exercises a controlling or mesmeric influence on another, especially for a sinister purpose.” A clear Alakazam all around.

Thinks they can hold their own, but ultimately are small and don’t exactly pose the biggest threat.

The beefier version of their predecessor, Machoke and Link are both the epitome of machismo.

I would not like to get on the bad side of either this Pokemon or this Muppet!

Bellsprout, being a houseplant, ages at an alarming rate.  Much like Old Tom, who is mere moments away from his next phase…

…Real Old Tom, who is growing older by the second.  He may even be on the verge of becoming…

…Dead Tom.  And much like Dead Tom, all plants (including Victreebel and his predecessors) will eventually be buzzard food.

He also has tentacles, just like the Yip-Yip Martian!

Okay, a little more than rocks.  But all these Muppet Treasure Island heads do is sing and tell jokes.

All right, damn.  These rocks from Labyrinth aren’t kidding around.  I mean, they are a little. But they’re intimidating as all get-out.

That’s the first half!  Which Muppets will be assigned to which Pokémon in round two?  Who’s gonna be Snorlax?  What about Voltorb?  And won’t someone think of poor Mr. Mime???  Make your guesses and then come back tomorrow to find out!

Click here to be the very best on the ToughPigs forum!

by Joe Hennes and Julia Gaskill