REVIEW: Sesame Street’s “When You Wish Upon a Pickle” 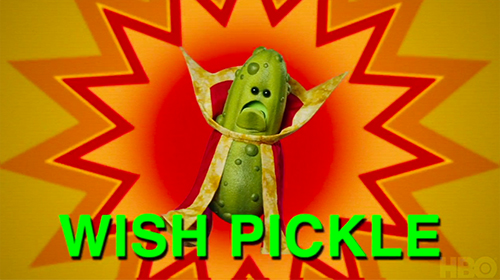 One of the best things about Sesame Workshop’s deal with HBO is that we’re seeing more primetime Sesame Street specials. And with another season of the iconic show just around the corner, another Sesame Street special is hitting television. This year, it’s “When You Wish Upon a Pickle,” which aims more at the silly side of the Street than its spiritual predecessors, “The Magical Wand Chase” and “Once Upon a Sesame Street Christmas.” So how is it? The short answer: it’s fine. The long answer… is this review.

WARNING: If your wish is for minor spoilers, well then… wish granted. 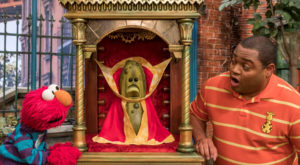 Elsewhere, Bert would love to be a weather forecaster on television, but he freezes up on camera. Ernie wishes that Bert would have the confidence to be on television. Abby Cadabby wishes she could be a great detective, like her literary hero, Natalie Neptune. And Cookie Monster, well, he wishes he had more cookies.

Enter the Wish Pickle, who is delivered mysteriously (by a guest appearance by Blake Lively) to Hooper’s Store. Gradually, everyone has their wishes granted: Chris and Elmo swap bodies, Bert is transported into the television and appears on several shows, Abby sees Natalie Neptune (played by Amanda Seyfried) come to life and help Abby figure out just what’s going on, and Cookie Monster isn’t specific in his wish and things go awry. And yada yada yada, Chris and Elmo realize that they love their lives and want to go back to how things were, Bert is terrorized by the programs he’s on, but he learns to communicate on camera, Abby and Natalie solve the case, and Cookie Monster learns why cloning isn’t always a good idea. You can pretty much figure out the rest.

And maybe that’s why this special left me feeling indifferent: it’s mostly predictable. I’ve seen the whole “wish goes awry” story done countless times. There’s nothing that really surprises me here. There is one exception to this: as Chris is in Elmo’s body when he naps, he starts to dream in Elmo’s imagination, leading to a funny edition of “Elmo’s World” where Chris has no idea what’s going on. But I felt like the stakes never get raised to a point where I thought what happened next was really exciting. 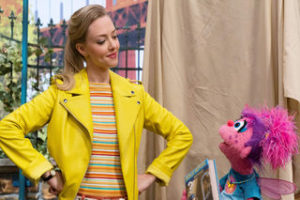 That being said, the special does have its strengths: the story moves at a brisk pace, which helps; I didn’t feel like I wasted time watching this special. And some of the visuals are funny: getting to see Bert freeze up on camera reminded me of Miss Piggy’s first time hosting “UFO Mania” in Muppets from Space. The puppetry and that soft whine sells it. Hearing Chris’ voice coming out of Elmo’s mouth (and vice versa) is funny for a time, but it loses its luster quickly. Keeping the action mostly restricted to a handful of characters helps to keep the story tight (though it does feel strange relegating the likes of Big Bird, Count von Count, and Grover to what amounts to cameos). I did enjoy Seyfried’s performance of Natalie; she brings an energy to the role that gives her good chemistry with Abby. I enjoyed it enough that I’d like to see her do more work on Sesame Street.

All in all, it’s a very okay special. It doesn’t have the New York City-traveling fun of “The Magical Wand Chase” or the important message and fantastic design of “Once Upon a Sesame Street Christmas,” but it’s not the worst thing I’ve ever seen from Sesame Street. If you’re looking to kill an hour, it might be worth a watch, though it may be better to watch with children. This definitely feels like this was made entirely for its target audience. Still, Sesame Street does better children’s material than most, so I’m sure there are things within that you’ll find enjoyable.

(Oh, and I’ll also share the one thing that absolutely infuriated me. There’s a running gag where Mr. Johnson orders a bowl of alphabet soup at Hooper’s Store. He gets the soup, but has no spoon to eat it with. He frequently reminds Chris that he needs a spoon. Meanwhile, Grover’s at the laundromat watching a riveting load of laundry in a washer. The great playwright Anton Chekhov once wrote, “One must never place a loaded rifle on the stage if it isn’t going to go off.” I will say, “One must never place Mr. Johnson into a Sesame Street project if Grover isn’t going to be his server.” I was denied some great Grover/Mr. Johnson action, and I feel cheated. Maybe I should bring this to the Wish Pickle.) 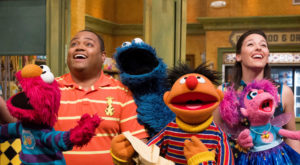