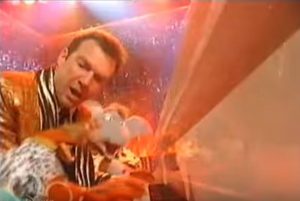 Here’s the moral of this episode: Muppets Tonight can manage just fine without Kermit, but Clifford is vitally important.

Okay, that’s not exactly what it’s about.  But I’m sure that interpretation was not lost on the writers.  By this time, critic and fan reactions for season one were in, and one of the common complaints was “Why is that purple guy hosting instead of Kermit the Frog?”  Whether it was because he seemed too obviously engineered to be “hip,” or because it seemed like he stole Kermit’s job, or because he looked kind of like a catfish, a number of viewers decided that Muppets Tonight would be better off without Clifford.

Which brings us to the Dennis Quaid episode, in which Clifford himself decides that Muppets Tonight would be better off without Clifford.  Dennis Quaid proves to be skilled at everything, from doing Rizzo’s taxes to creating a mock wedding cake, and all the Muppets are like, “Wow, you’re way better than Clifford!”, although that may not be a verbatim quote.  Clifford goes off to feel insecure for a while, then he comes back and realizes that his friends actually love him, and that’s the short version of the story. 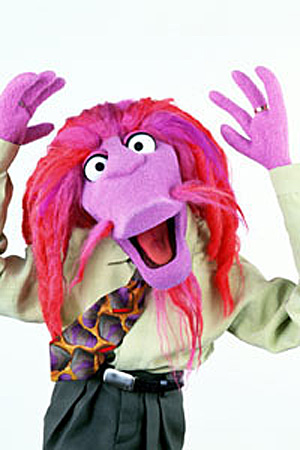 So is Clifford lovable?  As I’ve mentioned here before, I had no problem with Clifford as a character or a host when Muppets Tonight was on the air.  When I revisited the series in the ‘00s, I was somewhat less enamored of him, what with his suspiciously fashionable clothing and his turns of phrase like “Man, we are waist-deep in the big funky!” (Actual Clifford line.)

But now when I go back and re-watch Muppets Tonight, like for example while I’m writing a review series about it for fan website ToughPigs.com, I like Clifford.  He brings an energy to the role of host that 1996 Kermit probably wouldn’t have, and Kevin Clash’s performance is always solid.  So I’m in the pro-Clifford camp.

It’s interesting, though, (interesting to me, anyway) that while Kermit is supposed to be the executive producer, Clifford ends up thoroughly assuming the position Kermit filled on The Muppet Show.  He’s one of the primary decision-makers about which acts earn stage time.  On a whim, he can give an uncharismatic financial expert, or a fellow with an unusual adeptness at producing bubbles from his cranium, their big break.  He also has to deal directly with the guest stars, either reassuring them when the show is falling apart, or talking some sense into them when they’re the reason the show is falling apart. 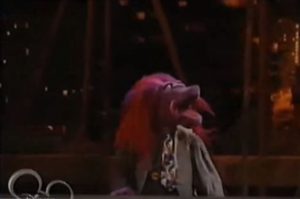 And while you could sum up the whole personality of the original version of Clifford with the word “laid-back,” he changed dramatically as soon as he took the hosting gig.  When disaster strikes, and it inevitably does, Clifford is always good for a panic, which usually involves the widening of the eyeballs that he didn’t even have before this series.

All of which is very Kermit-on-The-Muppet-Show.  Even Clifford’s dynamic with Rizzo, his stage manager (at least I think that’s Rizzo’s job) is very much like the one between Kermit and Scooter on The Muppet Show.

Meanwhile, Kermit largely allows Clifford to bear the burden of running the show. He hops by to perform on the show, to see how things are going, and occasionally to help make a decision. But he’s used judiciously. 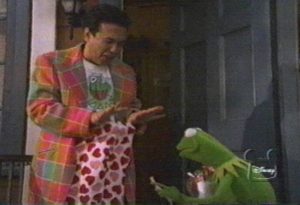 Which brings me to the part of the episode I alluded to above, in which Kermit leaves Clifford and the gang to produce the show on their own.  Kermit has plans to spend the evening with the winner of the Dinner with Kermit the Frog contest, who turns out to be Gilbert Gottfried — playing himself, no less.

Some of Muppets Tonight’s cameos are more like semi-guest stars, and Gottfried is one of the best.  All he really has to do, of course, is be Gilbert Gottfried, hollering and generally behaving obnoxiously, but it’s effective.  The 1996-era Kermit may not have the right energy to host a show, but he’s the perfect straight man for Gottfried’s insanity. And here’s a good answer for that Muppets Tonight trivia game you’ve been working on: Gottfried’s book of crime scene photographs is called Isn’t It Gross? 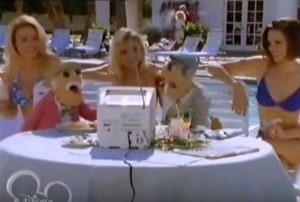 In this episode, Statler and Waldorf are watching the show while hanging out by a swimming pool.  And that is excellent.  I mean, it’s not necessarily excellent that they’re at a swimming pool, although as long as they wait an hour after eating before they go swimming it’s fine.  But it’s good to see them away from the retirement home where they spent the first season of Muppets Tonight.

The first season was like, “Remember those two feisty old guys who used to get out of the house every week and head over to the Muppet Theater to heckle the stars of The Muppet Show?  Yeah, well, now they’re so old and infirm they just sit around in robes and blankets watching the show on TV with a nurse on call.”  They were the same Muppets we loved, and still doing what they do, but I never liked the implication that they had become older and homebound.

In the second season, the show found various ways to goose its format, and one of my favorite adjustments was the decision to get the old men off their chairs.  In every episode they’re watching the show from a new location, like a ski resort, a golf course, or Times Square.  You know, I guess I care about those old fogeys, and I’d rather think they’re still capable of seeing and enjoying the world.  Even if, for some reason, they carry a TV with them on their travels so they can keep watching a show they hate. 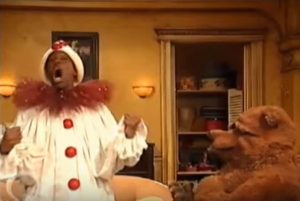 As the episode title indicates, this episode has no real guest star, only a bunch of cameos.  I’d like to spend the rest of this write-up rating the guest stars on a scale of 1 to 5 Doglions, in honor of that monster’s appearance in this episode.

Arsenio Hall: 5 Doglions.  He’s supposed to be the guest star, but he dies.  Hall really throws himself into his death scene and his subsequent revival, plus he sings opera so well you’d almost think it wasn’t his real voice.

Jay Leno: 3 Doglions.  I’m not his biggest fan, or his 80-millionth biggest fan, but he works pretty well as an exasperated foil to the dim-bulb Bobo.  (He was also all right on The Muppets, where his scenes were with a different bear.)  I also like that the premise of his appearance is that Bobo, who’s searching for a guest star for the show, has no idea who Jay Leno is. 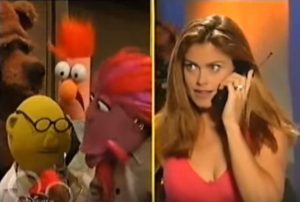 Kathy Ireland: 4 Doglions.  I must confess don’t remember much about the Kathy Ireland-featuring National Lampoon’s Loaded Weapon I, so I couldn’t tell you if she’s funny in it.  But she strikes just the right tone here, as the voice of wisdom the Muppets know they must turn to for advice on their guest star problem.  Her first thought: If she was trying to lure in a guest star, she’d sit poolside in a bikini.  That leads to a good sight gag when Bunsen and Beaker try that tactic.

Christopher Darden: 1 Doglion.  I’d like to know how this one came about.  I guess the show needed someone associated with the law for the scene where Clifford, Rizzo, and Zippity Zap(!) are nervously seeking a place to stash Arsenio Hall’s dead body.  So why not one of the prosecuting attorneys from the O.J. Simpson trial?  But his acting and his comedy chops leave a lot to be desired.  I find him Guilty of not being an especially talented comic actor! 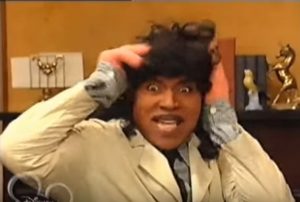 Click here to sit poolside in a bikini on the Tough Pigs forum! 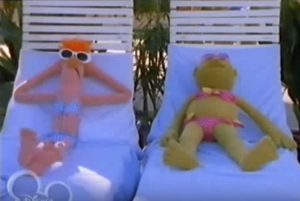