Does Muppets Tonight have the stuff we want to see on a Muppet show?

This “My Weeks” series is all about revisiting Muppets Tonight and asking, “Is this thing the Muppets did 20 years ago good, or what?”  But how did Muppet fans at the time respond?

As I’ve mentioned here before, I was active on the old Muppet newsgroups during the show’s run.  Newsgroups were places where people would talk about various topics on the internet, much as people talk about various topics on the internet to this day — only there were no memes, and if we wanted to see a gif, we had to go to a GeoCities page that was under construction.  I also subscribed to MuppetZine, the fanzine published by Tough Pigs founder Danny Horn.  It was kind of like the Tough Pigs website, with the advantage that you could tear the pages apart and fold them into little paper hats when you were finished reading.

Anyway, I’ve been looking back at some of the old threads from the newsgroups (many of which are still archived on Google Groups), and checking out some of the reader reviews submitted to MuppetZine.  For the most part, the Muppet fans of the Bill Clinton era were quite enthusiastic about the show.  There’s some lamenting of the scarcity of classic characters, but also a lot of talk about how great it is to have Muppets back on TV, how much more entertaining the show is than other TV shows, and how funny everything is.

Here’s a review submitted to MuppetZine by a youngster named Ryan Roe: 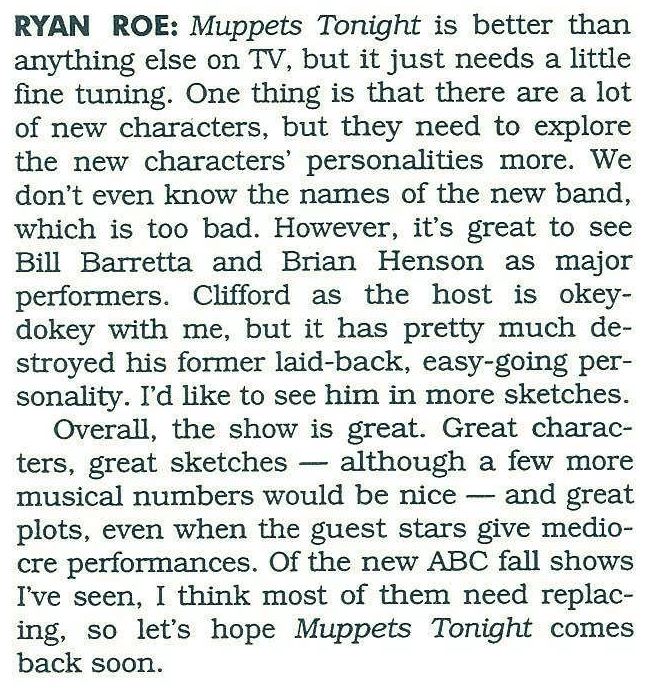 “Clifford is okey-dokey.”  I told you I was young, right?

If memory serves, I wrote that between the first and second seasons, or possibly between the first batch of episodes and the summer of the episode burn-off.   Questionable word choices aside, my review was pretty typical.  I don’t know how many people were clamoring for more insight into Jowls, but there was certainly a lot of call for more musical numbers — or at least, more musical numbers that were allowed to play out without constant interrupt– 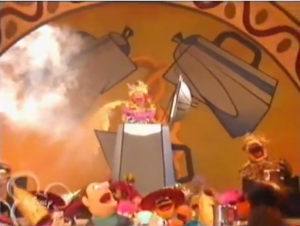 HEY, LOOK AT WHAT’S HAPPENING ON STAGE!  HOW ABOUT THAT?

…Interruptions.  That insistence on cutting away is still pointed out as one of the show’s major flaws.

But in this episode, we get an entire (non-music video) song!  It’s the rousing “Coffee Song,” full of caffeine but gloriously free of cuts to the control room, backstage, or Statler & Waldorf.

“The Coffee Song” is a catchy ditty, and silly enough that this performance deserves to go on the pile of Things That Feel Like They Could Be on The Muppet Show.  Bunsen and Beaker, some dancing bananas, and a few of the pirates from Muppet Treasure Island show up to make it feel like a true Muppet party.  Because everyone’s #1 and #2 favorite Muppets are the dancing bananas.  They really should have done more stuff like this on the show. 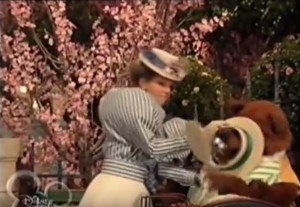 The rest of the episode is… Well, it’s okay.  The backstage story with Heather Locklear eating Bunsen & Beaker’s mood-altering food and alternating between mega-mean and super-sweet seems like it should have great potential for laughs, but it never quite turns into comedy gold.  Locklear is game enough for acting goofy, but I wonder if this would have been funnier with a more comedically-inclined performer.  Like Julia Louis-Dreyfus.  Oh, or Betty White.  Wouldn’t Betty White have been great slapping Beaker around and knitting mittens for Johnny Fiama?

In fact, as satisfying as it is to see Locklear abruptly shift from smiling at Whatnots to whacking bunnies with her parasol, the highlight of the whole episode happens during the closing credits, when Big Mean Carl exhibits the effects of scarfing down the happy biscotti and the angry chimichangas, followed by a happy lamp and an angry alarm clock.

A crazy monster eating inedible objects… That’s the stuff I want to see on a Muppet show. 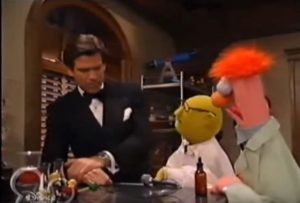 I never realized this before, but this episode is one of my favorites.  It’s also pretty representative of the series as a whole.  Let me count the ways.

It starts with a sufficiently famous guest star who’s up for anything.  I don’t have any Q-rating data (not to be confused with Q) on me right now, but I’m going to go ahead and boldly declare that the star power of the average Muppets Tonight guest was greater than that of the average Muppet Star guest.  Sure, The Muppet Show had its share of big names like Elton John and Carol Burnett, but as delightful as Marisa Berenson and Jaye P. Morgan were, were they really that famous?

But Muppets Tonight brought in a solid selection of celebrities in its brief run, including movie and sitcom stars, chart-topping musicians, and the center square from Hollywood Squares.  Pierce Brosnan had only been in been in one James Bond movie at the time of this episode, but it was a well-received one, and chances are pretty good that anyone tuning in would have recognized him. 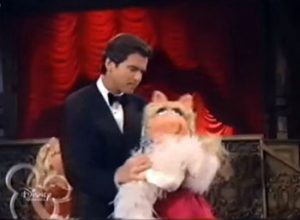 And he’s funny!  Perhaps it should be no surprise given his role in Mrs. Doubtfire (and the goofiness of his later Bond films), but Brosnan drives the show forward as effortlessly as if it were an invisible Aston Martin.  The premise of the episode hinges on the idea that the real Pierce Brosnan is embarrassingly awkward and non-suave, and he commits to all the gags, from spilling a prop tray full of champagne glasses on himself to ripping off Miss Piggy’s dress.

Also, one of my favorite things ever on Muppets Tonight is Brosnan’s juggling act with Andy and Randy, in which he repeatedly addresses them as “Nancy and Clancy” while beaning them with bowling pins.  To this day, when I’m called upon to toss an object to someone, I’ll often call out, “Coming at you, Nancy!  Coming at you, Clancy!”  Nobody ever gets it.

The episode also has a balance of old and new characters.  There’s Clifford, of course.  Johnny Fiama and Sal show up for a “cheap knockoff of a James Bond song.”  Bobo is part of a running gag with Brosnan walking in on him while he’s working on his personal hygiene. 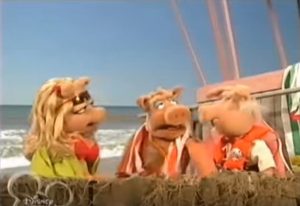 But we also get some nice doses of Bunsen and Beaker, the “Bay of Pigs Watch” sketch (Boo!) features Julius Strangepork (Yay!), and Fozzie Bear even drops by to give Pierce Brosnan a pep talk.

In fact, there are so many characters doing so many things in this episode that I only just now noticed that, aside from the theme song intro, noted Muppet Kermit the Frog is completely absent! Some might call that a travesty, but it says a lot about the writers’ confidence in their evolving ensemble.

When Brosnan redeems himself, it happens in a way that proves the show remembers its Muppet Show roots.  The lobster army finagling a spot on the show so they can take over, and Brosnan defeating them, is awfully reminiscent of the bad guy spies finagling a spot on The Muppet Show and Roger Moore defeating them.  It’s a clever homage.  Or possibly a blatant knockoff. 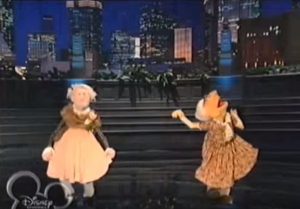 Oh, and the Dancing Grannies!  Those old ladies are a delightful use of bluescreen (I think) puppetry — and just look at the way their little feet move!

All right, I should start winding things up before this deteriorates into me just naming things that happened.  (Too late?)

Click here to hold way too many pies in front of the Tough Pigs forum! 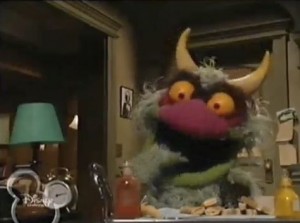